Features on each member of the 1990 Rockford Expos, as included in that year's team set. 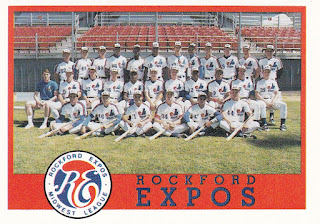 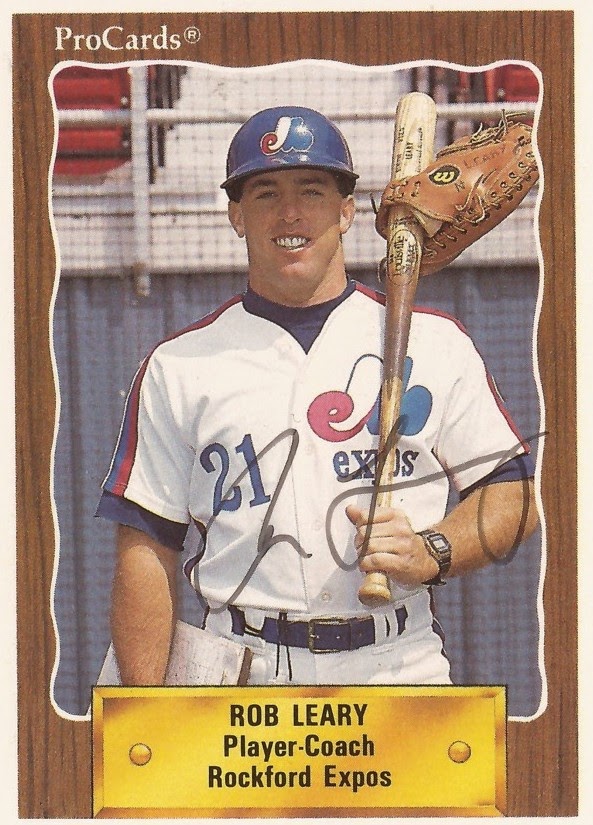 1 - Dan Archibald, Stat Line
Dan Archibald helped his college team to a 1988 win. He only played three seasons as a pro.
2 - Doug Bochtler, That Determination
Doug Bochtler used his determination to get himself to the majors, in his seventh pro season.
3 - Chris Bushing, Somewhere Else
Chris Bushing vowed to try somewhere else, if he was released. He did, and he made the majors.
4 - John Cain, Winter Meetings
John Cain attended winter meetings - the Great Lakes Athletic Trainers Association Winter Meetings.
5 - Bill Cramer, Home Run
Bill Cramer hit his first home run in his third pro season. It was his only home run, and last season.
6 - Scott Davison, Watch Him
Scott Davison got back into the game, switched positions to pitcher and then made the majors.
7 - Jim Eddy, Some Competition
Jim Eddy couldn't stay away from the competition. He continued playing on weekends, after his career ended.
8 - Chuck Elder, Insurance Run
Chuck Elder gave his college team some insurance. He later played three seasons as a pro, never made AA.
9 - Michael Grace, Extended Lead
Michael Grace helped his Salt Lake team extend a lead in 1989. He never got himself to AA.
10 - Ben Howze, Another Sport
Ben Howze played football in high school and baseball in the pros. He never made AA.
11 - Deryk Hudson, More Swings
Deryk Hudson took his share of swings, but not as many as he likely would have hoped. 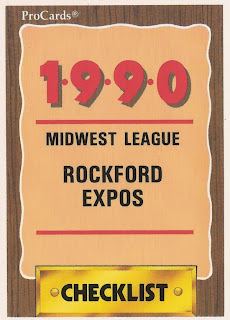 12 - Keith Kaub, Could Drive
Keith Kaub wasn't there to hit singles. He looked for pitches to drive. He played three seasons as a pro.
13 - Rusty Kilgo, Was Brilliant
Rusty Kilgo was Arizona State's surprise weapon in 1988 College World Series. He played eight years as pro, never made bigs.
14 - Ron Krause, Different Year
Ron Krause helped West Palm Beach to 1991 league title. Played five seasons as a pro.
15 - Tim Laker, Own Regrets
Tim Laker learned how to hit, then later said his hitting was helped by steroids.
16 - Rob Leary, Player Assessment
Rob Leary has assessed players since his playing days. He's doing so in 2013 as a bench coach for the Marlins.
17 - Joe Logan, Mirrors That
Joe Logan had a brief playing career, but a long one as a coach, and in sports diplomacy.
18 - Martin Martinez, Door Closed
Martin Martinez closed the door on a college win. He played three seasons as a pro, never made AA.
19 - Sid Monge, Do Best
Sid Monge did what he did best. He pitched in 10 major league seasons, and later became a coach.
20 - Mike Quade, Built On
Mike Quade built on early success to become Cubs manager. He couldn't build on that early Cubs success.
21 - J.D. Ramirez, Working Summer
J.D. Ramirez got a job as a teacher, but still returned to play summers in independent ball. He never made the majors.
22 - Jeff Ramsey, On Defense
Jeff Ramsey worked on defense in baseball. He later helped others on defense, as a high school basketball coach.
23 - Gary Regira, Pitched Well
Gary Regira pitched well enough in college, but not well enough for a long pro career.
24 - Troy Ricker, Big Hits
Troy Ricker hit two home runs in a 1989 game at West Palm Beach. He played nine seasons as a pro, but he never made the bigs.
25 - Buen Rodriguez, Winning Triple
Buen Rodriguez brought a playoff lead run home with a triple in 1989 NYPL Championship series. He played two seasons as a pro.
26 - C.L. Smith, Enough Offense
C.L. Smith couldn't generate enough offense to make AA>
27 - Brian Sullivan, Family History
Brian Sullivan has a family history in sports. But he's the one who played pro. He did so for two seasons.
28 - John Thoden, Clutch Games
John Thoden pitched clutch games for North Carolina in 1989. He played five seasons as a pro, but never made the bigs.
29 - Steven Whitehead, Even Pros
Everyone made errors, even pros, Steven Whitehead told his players. Whitehead was a pro in five seasons.
30 - Brian Wilkinson, Started For
Brian Wilkinson came away with a win in a 1991 high-A game. He played five seasons, never made AA.
31 - Tyrone Woods, Any Time
Tyrone Woods showed what he could do in Japan, after attending a tryout.
Posted by Steve78 at 1:00 PM