Features on each member of the 1990 Everett Giants, short-season affiliate of the San Francisco Giants. Players are as included in that year's team set.

Interview (1)
1 - Mate Borgogno, The Rest
Mate Borgogno realized his dream of playing as a pro. His career, though, was brief. 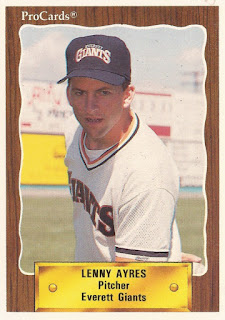 1 - Jim Averell, The Walker
When Jim "The Walker" Averell entertained, Everett fans cheered.
2 - Lenny Ayres, An Avenue
Lenny Ayres started with the fundamentals, then played three seasons as a pro. He never made AA.
3 - Mate Borgogno, Every Day
Mate Borgogno hoped to catch the eye of scouts, and did. His pro career, though, was brief, just two seasons.
4 - Dan Carlson, Rather Pitch
Dan Carlson wanted to pitch in the bigs, not so much sit on the bench. He played in four major league seasons.
5 - Eric Christopherson, Not Afraid
Eric Christopherson was a highly touted college catcher. Success, though, never came as a pro.
6 - Brian Dakin, Career Level
Brian Dakin's sports playing career was a brief one; his sports reporting career has been much longer.
7 - Courtney Davis, Ample Opportunity
Courtney Davis struggled in 1991 and never recovered. He never made the majors.
8 - Scott Ebert, Too Fierce 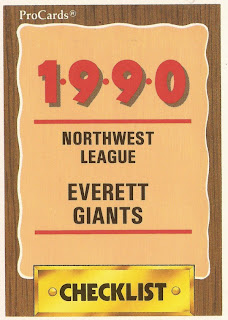 Scott Ebert was sometimes too fierce. He couldn't translate that to the pros. He played four seasons, but he never made the bigs.
9 - Dave Edwards, Proper Attention
Teenage injuries helped Dave Edwards get his World Series ring.
10 - Dan Flanagan, Two Scoreless
Dan Flanagan threw 13.1 scoreless for VCU in 1990. He went on to three pro seasons. He never made majors.
11 - Frank Gould, Third Win
Frank Gould helped Pocatello to a 1989 win. He couldn't help himself to a long pro career. He played just three seasons.
12 - Shelby Hart, Inside-the-Park
Shelby Hart hit an inside-the-parker in high school. He went on to a pro career, but a brief one.
13 - Mike Helms, Missed It
Mike Helms played basketball at Oregon, then pro baseball with the Giants. His pro baseball career lasted just two seasons.
14 - James Huslig, Throw Strikes
James Huslig threw a college no-hitter. His opportunities to do so in the pros were few. He played a single season.
15 - Adam Hyzdu, Prepared Himself
Adam Hyzdu prepared himself for anything. He eventually played in seven major league seasons.
16 - John Jackson, Gut Feeling
John Jackson played both baseball and football. He made the NFL, but not the majors.
17 - Marcus Jensen, Break Through
Marcus Jensen tried to beat the defensive player label. He played in seven major league seasons.
18 - Juan Lopez, Really Good
Juan Lopez has three decades of experience in baseball, including as bullpen coach for the Reds.
19 - Deron McCue, Six Innings
Deron McCue wanted to see what his team had in 1990. He played and coached, but never made the majors.
20 - Kevin McGehee, Much Adrenalin
Kevin McGehee had much adrenalin in his major league debut. He ended up getting just four more major league appearances.
21 - Brian McLeod, Back In
Brian McLeod was effective in a June 1990 game at Everett, but wasn't effective enough in his career to make the majors.
22 - Mike Myers, Left-Handed Specialist
A smashed hand hurt Mike Myers' draft status. It didn't hurt his career.
23 - Kurt Peltzer, Talked About
Kurt Peltzer gave himself something to talk about in 1995 with a no-hitter. He never got the chance to in the bigs.
24 - Derek Reid, Outstanding Catch
Derek Reid had a good catch in college. He never got the chance for one in the bigs.
25 - Keith Ringgold, Unconventional Run
Keith Ringgold scored an unconventional run for Everett in 1990. His pro career was brief.
26 - Joe Rosselli, Definitely Nervous
Joe Rosselli was definitely nervous for his first major league start. He got nine total major league outings.
27 - Diego Segui, More Motion
Diego Segui fooled batters with his fork ball. He pitched in 15 major league seasons.
28 - Jason Sievers, Worked a Walk
Jason Sievers drew a walk, but it wasn't what his team needed. He went on to play five seasons as a pro, but he never made the bigs.
29 - Tony Spires, Triple Total
Tony Spires remains on his college conference's triple leader board. He played only two seasons as a pro.
30 - Dan Varnell, His Power
Dan Varnell helped his short-season team to 1990 a win with a home run. His career lasted just 39 games.
31 - Ricky Ward, Too Much
Ricky Ward speaks to hitters with experience. He played five seasons as a pro, but never made the bigs.
32 - Mark Yockey, Different Perspective
Mark Yockey helped Lewis-Clark State to NAIA World Series, he couldn't help himself to the majors.
33 - Jason Young, Stolen Bases
Jason Young helped his college team with stolen bases. He couldn't help himself as pro higher than high-A.
Posted by Steve78 at 8:59 PM