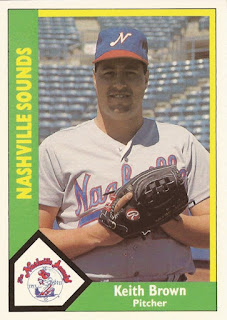 Keith Brown recalls pitching against Fresno State when the scout saw him.

"At that time all I wanted was an opportunity," Brown told The Greatest 21 Days recently, "because through college I always heard that I didn't throw hard enough."

The Reds gave Brown that opportunity, taking him in the 21st round of the 1986 draft.

"It didn't matter where I got drafted at," Brown recalled thinking, "I just wanted to show my abilities."

Brown took his opportunity all the way to the majors, seeing time in four major league seasons. Overall, the right-hander got into 25 major league games, starting five. He also got into eight games for the eventual world champion Reds of 1990.

But Brown ended up unable to show everything he could do. In the summer of 1993, while playing AAA with the Royals, doctors diagnosed him with non-Hodgkin's lymphoma. He made it through the arduous treatment, but he never made it back to the majors.

Brown spoke to The Greatest 21 Days by phone recently from his home in Tennessee. He covered his career from growing up in California to college and the pros. He also told of the battle with cancer that ended his career.
Brown was born in Arizona, but grew up in Arizona. He didn't get started in baseball until he was 11. He recalled his younger days being taken up with a different sport, Go Karts.

From age 4 to age 16, Brown raced Go Karts and quarter midgets. His uncle Ray Brown helped fund his hobby. Brown also recalled his uncle taking him to Dodgers games as a kid.

The Dodgers, Brown recalled were his team growing up, until the Reds found him.

After making the majors with the Reds, Brown recalled eventually getting to go with the team to Los Angeles. Brown got to invite his uncle into the locker room and onto the field at Dodger Stadium

"That was my way of giving back to him for the years that we raced Go Karts together," Brown recalled.

Brown had been like a son to his uncle. "I thought it was great just to see him on the field and knowing that the Dodgers were his favorite team," Brown said.

Baseball and Go Karts overlapped for a few years until his parents decided they didn't want him racing anymore, he recalled. Baseball then took over.
"That's when I really started getting serious about pursuing baseball," Brown said.

Brown played shortstop and third base in high school, but he turned to pitching in college.

He started off at the College of the Siskiyous before moving to Cal State-Sacramento and then on to the Reds.

Brown started with the Reds in the rookie Gulf Coast League, playing in front of few fans. He also saw time that year at rookie Billings and AA Vermont, a stark contrast to his GCL time.

"When I got to Billings, then it was kind of nice having people out there, 6 to 8,000 people playing baseball, where as when I was in Florida there might be one or two people," Brown said.

On the field, Brown recalled not having to do anything special. He just had to show people what he could do.

Brown showed that quickly. In 1987, his second year as a pro, Brown went 13-4 at single-A Cedar Rapids, turning in a 1.59 ERA. He then made AA Chattanooga and AAA Nashville in 1988.
In August 1988, Brown got his call to the majors. Nashville owner Larry Schmittou broke the news.

And what was Brown's reaction?

"I was pretty excited," Brown said, "because I wasn't a really high draft pick. I was 21st round. So I had to work hard to get what I wanted to get up there and still, when I got there, I had to fight my way to stay up there."

Brown quickly got into a game. He started that night in Cincinnati against the Cardinals. He went seven innings, giving up four hits and one earned run in the 4-1 Reds win.

"It was a childhood dream, being up in the big leagues," Brown said.

After a season back in the minors, Brown returned to the bigs in 1990. After fighting his way to get to the majors and get back, he then had a very different fight on his hands, with non-Hodgkin's lymphoma. (Part 2)