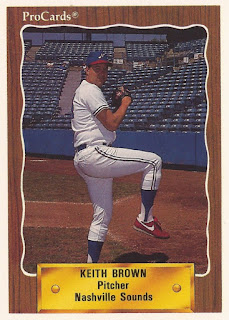 Up until the AAA All-Star break in 1993, Keith Brown had a pretty good career going. He'd seen the majors four out of the previous five seasons with the Reds and he still hoped to get the call that year with the Royals.

After the 1993 AAA All-Star break, the majors were the least of his worries.

When he got back to Omaha, Brown did just that and the diagnosis was as serious as feared: Non-Hodgkin's lymphoma. Cancer.

"It's kind of like I tell people," Brown told The Greatest 21 Days recently. "When I was in baseball, I was fighting my way to the big leagues. And my life changed and then I had a different fight. I had to fight for my life."

After chemotherapy and then a bone marrow transplant, Brown made it through. He survived. He made it back onto the baseball field, but only briefly. He never returned to the majors.

But he did find something else. He found his faith.

"I was like, 'OK, Lord, you get me out of this hospital and I'll be with you 100 percent,'" Brown recalled, noting others with his diagnosis didn't make it. "As i would say, that was my life-changing experience and it changed my whole life."
Brown went on to settle in Nashville, a city where he played parts of five seasons and got life-saving advice in a sixth. He also, for years after his time as a pro, he taught kids the game that got him to the highest levels.

Brown first made the majors in 1988 with the Reds. He got into four games and had a 2.76 ERA. He then didn't get back until 1990, largely due to a foot injury suffered in spring training 1989, Brown recalled.

A player with cleats on stepped on Brown's foot and the resulting injury bothered him the rest of the year.  He went 8-13 at AAA Nashville and his ERA jumped to 4.80.

"That was probably my worst year," Brown said. "I couldn't push off or do anything."

He came back and had a good spring in 1990 and returned to Nashville in the bullpen. He saved nine games there and, by August, found himself back in the majors in time for the Reds' stretch run.

Brown was with the team when they clinched the division in a rain-shortened game at home. Brown recalled teammates celebrating on the wet turf afterward.

"Some of the guys were like out there jumping and sliding on the mat, crazy," Brown said. "I mean, there were guys sliding all over the place."

Brown watched from home as his teammates went on to win the World Series. His eight regular-season appearances got him his ring.
Brown returned to the Reds for 11 relief outings in 1991, then two starts in 1992.

Brown described himself as more of a sinker ball pitcher. "I wasn't really one of those overpowering guys," Brown said, "but I got people out with my location."

For 1993, the free agent Brown signed with the Royals. Brown thought he'd get a shot at Kansas City, but, despite a first-half record of 11-1 at Omaha, Brown didn't make it up.

Then came his diagnosis.

Brown played the second half while receiving treatment. He also underwent chemotherapy. He thought he'd do five month of chemo and be back to play baseball.

He soon made his way to Stanford University to finish his treatments. The doctors there recommended a full bone marrow transplant. Without it, he recalled them telling him, he might have 10 years.

Plans changed. He needed the transplant.

"Going through that at 30 years old was not easy," Brown said. "I was very blessed that I had went to Stanford to get all that done."
At Stanford, Brown recalled, he was their 38th patient for such a procedure. He took heart in 38 also being his old uniform number with the Reds.

"It's not an easy experience," Brown said, especially the chemo. He likened it to having a bad hangover. He recalled times he threw up leaving treatments.

Due to his recovery, Brown didn't play at all in 1994. It was year-long process. He recalled getting help financially along the way from Major League Baseball's Baseball Assistance Team. He's done talks for them since. "They're a very good foundation," Brown said.

Brown tried to come back in 1995, but his comeback was short-lived.

"It was more of just mentally saying I'll try to go through the cancer," Brown said, "but I knew when I started throwing again, I knew that I wasn't going to be able to perform because the bone marrow transplant is very, very hard on your body."

Assigned to AAA Charlotte with the Marlins, Brown played in four games, ending his career.

His playing days over, the native Californian settled in Nashville. He now lives there with his family. He taught baseball lessons to local youth for years after his playing days, not so much anymore. He still talks about his experiences to members of his church and elsewhere.

He also talks about how his illness drew him closer to his faith.

"That's been my whole life since," he said.