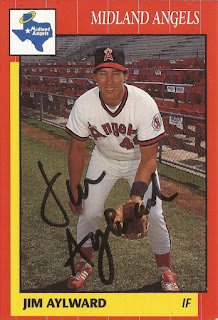 Jim Aylward thought his career was over.

After one season in the Phillies organization - a season where he played well - he'd been released. He also found himself back in school.

"I only played a half a season," Aylward recalled to The Greatest 21 Days recently. "I wasn't too happy with professional baseball at this point."

That's when he found himself back watching a game at his old college, Grand Canyon University. He also ran into a scout and instructor who was well aware of Aylward from his time at Grand Canyon.

It was future major league manager Joe Maddon. Aylward's pro career was about to restart.

Maddon, Aylward recalled, recognized him and asked how he was doing. Aylward responded he'd been released. The Angels, Maddon relayed, had interest in signing him before.

"He said, 'Meet me back here tomorrow and I'll have a contract for you to go to spring training with the Angels,'" Aylward recalled, "but you've got to make a team."

"I said 'That's all I'm asking for, is a chance," Aylward recalled.

Aylward spoke to The Greatest 21 Days recently from his new home in Kansas, where he now serves as manager and instructor at the 365 Sports Complex in Inman.

Aylward covered his life in the game, from learning it in growing up in the Las Vegas area to college and the pros, as well as that second chance to play the game he loved.

Aylward was born in the San Francisco area, his family moving to Las Vegas when he was nine or 10. In the Bay Area, Aylward recalled going to Athletics and Giants games with his family.

By the time he was a sophomore in high school, Aylward was playing well enough to make a local all-star game. He also played on the Legion team against older players, including guys who were back from college and he played well.

"I tell people today that I was always a hard worker," Aylward said. "I wanted to do well. I worked at it. It was easy, but I knew I had to work at it. Especially when I got to college and I saw the competition."

When his friends were out doing their thing, he recalled, Aylward was working on his game.
Though he seemed to get some attention from scouts in high school, Aylward wasn't drafted. His father, he recalled, had always stressed education and may have relayed that to inquiring scouts.

He had already picked his school by then, too. He was going to Grand Canyon.

Aylward was being recruited by them, as well as his hometown UNLV team. UNLV wanted to make him a third baseman. Aylward had played shortstop in high school.

"When I saw them play and the coach how he handled the players my decision was made up," Aylward said.

The Grand Canyon athletic director was with the team and wrote out the full-ride scholarship. Aylward took it home and with the urging of his father, he signed.

Aylward recalled his college experience as everything he was looking for. He played regularly, starting in both his sophomore and junior seasons. He got exposure. Players ahead of him got drafted.

He also got to play on a national-title contending team each year. His high school had won the Nevada state championship when he was a junior. It was during his junior year at Grand Canyon that he helped his team to the NAIA national championship.

"That was our goal every year from Day 1, to win a national championship and it happened in my junior year," Aylward said. "I was captain of the team. It was just hard work, three years of hard work."
Aylward hit his team to the title game, knocking two home runs in the game that got them there. He called that run one of the best experiences in baseball he had.

"I think I was always that type of player, I never got too anxious as far as anxiety or anything," Aylward said. "I was calm about those things ... My game didn't change because the stakes were higher, so to speak."

That showed years later, he recalled, when he got the walk-off hit to bring a championship to single-A Quad City.

It was after that national title season that Aylward turned pro. He wasn't drafted again, but he did sign later. He returned to Kansas to play in the summer Jayhawk Baseball League, a league he'd played in the previous summer.

His team made the National Baseball Congress tournament. In the first game, Aylward recalled going 4 for 4 with a couple home runs. Doug Gassaway, a scout for the Phillies was there and saw him.

Gassaway had talked with the Phillies Phoenix scout and he made Aylward an offer. Aylward had a year left of college, but Aylward figured it was the right time to move on to pro ball.

His mother was in town for the tournament and got to share the experience with him.

All signed, Aylward recalled giving Gassaway a throwaway question. Where was Gassaway off to then?

"He looked at me and he says 'I'm looking to find someone to go take your position,'" Aylward recalled. "And he was serious. I think at that point I knew this was a serious business." (Go to Part 2)