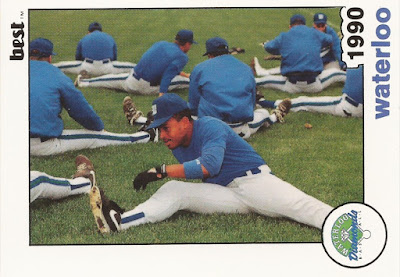 Features on each member of the 1990 Waterloo Diamonds, single-A affiliate of the San Diego Padres. Players featured are as included in that year's team set. Click on the player's name to read more. 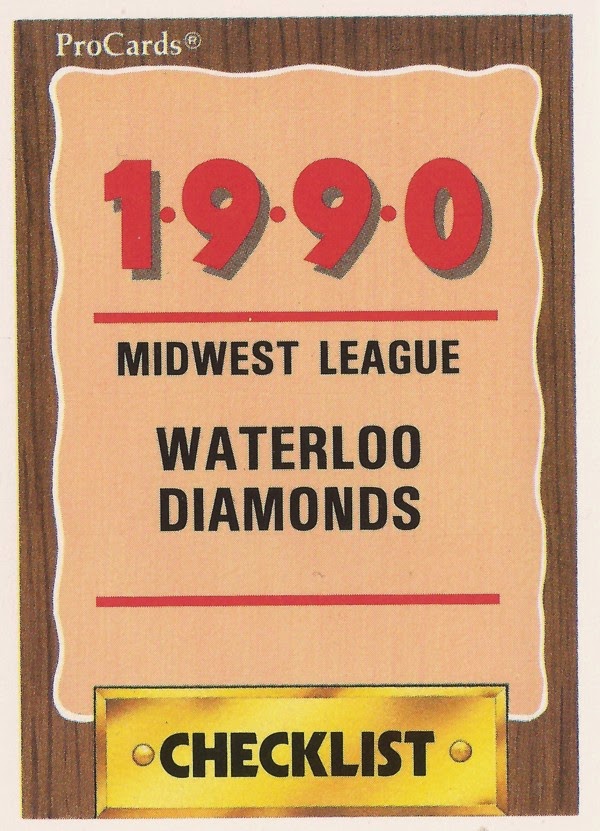 1 - Ron Billingsley, His Job
Rod Billingsley's job was to work with his pitcher. He worked it in two seasons.
2 - David Colon, Stop Sign
David Colon got lucky in 1988 at Sumter. He never got lucky enough to make AA.
3 - Greg Conley, Pitch Caller
Greg Conley was a pitch caller in high school and later the pros.
4 - Tom Doyle, Tested Love
Tom Doyle learned the minors can test one's love of the game. His did not break.
5 - Todd Embry, Pitching Limit
Todd Embry was on a pitch count at rookie ball and in his brief career.
6 - Bryce Florie, Got There
Bryce Florie was delighted to start, then to be on the field.
7 - Luis Galindez, Really Late
Luis Galindez took part in a 25-inning game. His career was limited to four seasons.
8 - Gene Glynn, Higher Level
Gene Glynn coached in the bigs for a decade. He's manager at AAA in 2014.
9 - Jeff Hart, About Winning
Jeff Hart worked with young Special Olympic athletes in 2009. He played three seasons as a pro.
10 - Ray Holbert, Teed Off
Ray Holbert was teed off. He then hit a grand slam for his first major league home run.
11 - Brad Hoyer, Much Poise
Brad Hoyer showed poise in an early pro game. He never saw AA.
12 - Jose Lebron, Quality Start
Jose Lebron started a marathon game and had a quality start. He played seven seasons, but not in the bigs.
13 - Tony Lewis, No Bones
Tony Lewis came back from college comebacker to the face to play in two pro seasons.
14 - Bryan Little, His Determination
Bryan Little showed speed and determination as a player. He's been teaching that to others since.
15 - Steve Martin, Strong Character
Steve Martin went to Australia to polish his skills and was soon traded. He never made the majors.
16 - Butch McKeon, Competitive Fire
Butch McKeon had a competitive fire in five pro seasons. He passed away in 1998.
17 - Ron Morton, Efficient Innings
Ron Morton delivered in 1988 short-season game with Spokane. He played in just three seasons.
18 - J.D. Noland, Fast Enough
JD Noland once stole 81 bases in a season. He never got to the bigs.
19 - Ron Oglesby, Big-Leaguer
Ron Oglesby didn't make the bigs as player. He made the bigs as a coach. He also made his dad a happy man.
20 - George Poulis, An Honor
George Poulis continues as head trainer for the Toronto Blue Jays in 2016.
21 - Billy Reed, Two Hits
Billy Reed picked up two hits in a high school game. He later played four pro seasons as pitcher.
22 - Terry Rupp, Maximum Potential
Terry Rupp went out and had fun. He played two pro seasons, later was a coach.
23 - Osvaldo Sanchez, Kept Going
Osvaldo Sanchez flashed his glove in the low minors. He never got to the bigs.
24 - Matt Toole, Promoted To
Matt Toole helped his Spokane team to a lead in 1989. He played two seasons, but he never made AA.
25 - Mark Verstandig, Every Day
Mark Verstandig waited for his opportunity. He waited in five seasons, but he never made the bigs.
26 - Shawn Whalen, Easy Arm
Shawn Whalen went from a short playing career to a career as a scout.
27 - Matt Witkowski, Can Happen
Matt Witkowski helped his team to the playoffs. He played eight seasons, but he never made bigs.
Posted by Steve78 at 1:00 PM