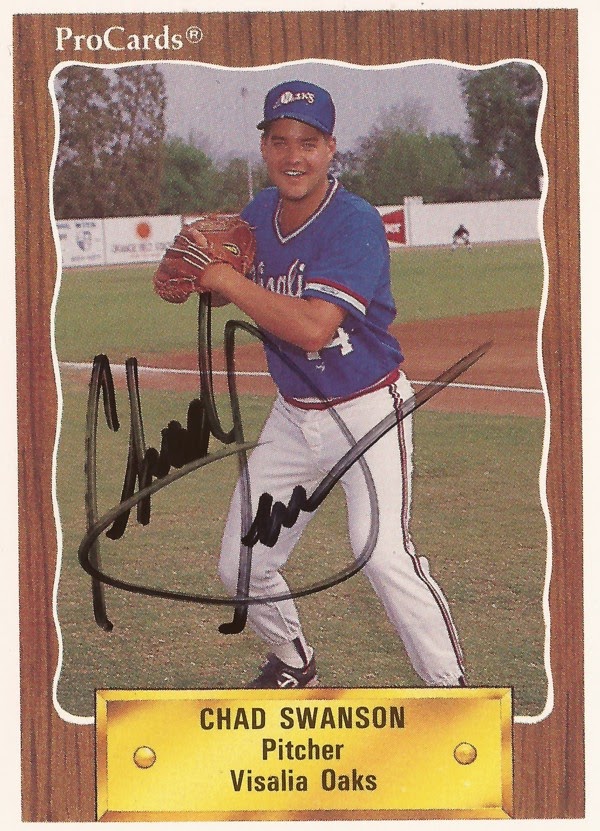 The pitch was probably four inches off the plate and about six off the ground.

Throwing it was new Kenosha Twin Chad Swanson, who was just starting his professional career. The player he was facing: Future major leaguer and then-Beloit Brewer Greg Vaughn.

"He swung, let go with his right hand and hit it out to the opposite field," Swanson recalled recently to The Greatest 21 Days.

"I thought if I give up home runs on pitches like that, I better never throw a strike," Swanson added laughing.

He went on to throw enough good pitches for a professional career that spanned four seasons. He never saw AA, but he did see The Chicago Tribune.

Swanson made The Tribune for a prank he and a teammate pulled on two umpires, locking the umps in their hotel room using nothing but pennies.

Swanson spoke to The Greatest 21 Days recently by phone from his Minnesota home. He covered his life in baseball from his days as a youth growing up across from the main baseball field in town to his successful tryout for the Minnesota Twins at the Metrodome, beating out many others for a shot at the pros.

He also covered his brief career where he saw time in the single-A Midwest League with Kenosha and in the high-A California League at Visalia. A pinched nerve in his back, one he tried to hide from the team, ultimately led to the end of his career.
Swanson grew up in Moorhead, Minn., across the Red River from Fargo, N.D. His house was across the street from the main ballpark in town, he recalled and that ballpark was a mainstay of his youth.

Basically, he recalled, he lived at that ballpark.

"My mom always knew where I was," Swanson said. "When it was time to eat, she would be in the front door with binoculars and flick the light off and on until she saw that I would respond."

Swanson would run home, eat and then get back across the street as quick as he could.

At the ballpark, Swanson got to see the local American Legion and high school teams. He even got to earn some money on the side, cleaning out the dugouts for a quarter.

"I got to learn the game inside and out at a really young age," Swanson recalled.

He learned about catching, playing the outfield and infield, as well as pitching. "Just being around the game you can pick up so much," he said.

Growing up in Minnesota, Swanson also played hockey. After the 1980 Olympics, he had it in his mind to play in 1984. He soon realized hockey wasn't going to work out. Baseball was the sport he excelled at as a player. Baseball is the game he stuck with.
Early on he recalled hearing that his arm was above average compared to other kids his grade. In high school, he moved up to the varsity team as a sophomore.

From Moorhead High School, Swanson went on to Concordia College in Moorhead. When he wasn't pitching in high school and in Legion ball, he was doing something else like catching.

He expected he'd do the same at Concordia, he recalled. He found out otherwise with bat in hand readying to hit in the cage. His coach told him not to worry about hitting. He wanted Swanson to focus on pitching.

"That was kind of a rude awakening there," Swanson said. "I just kind of stuck with pitching ever since."

Swanson recalled starting his career on a run of 31 scoreless innings. Swanson was still disappointed, though. He stayed at Concordia for two years. He then moved to transfer.

Before he went to a new school, though, he took a year off. He worked with pitchers at his old high school. He also tried out for the Minnesota Twins. It was June 1986.

The Twins, he recalled, had an open tryout every year after the draft at the Metrodome. Swanson decided to go. He wanted to get his name out. He also wanted to see where he stood compared to others.

He didn't get signed that year. But he did get his name out there. He also got to try out in a major league ballpark.
"I was just kind of in awe of the whole situation, being there on the floor of the Metrodome," Swanson said.

Swanson moved to his new college that fall, St. Cloud State. He pitched well enough there. He then returned for the 1987 Twins tryout.

His work at St. Cloud, as well as his work at the previous tryout paid off. When he came back, Twins scouting director Terry Ryan remembered who Swanson was and told Swanson the first day to save his best for the second day.

He did and one of the scouts asked him if he was interested in signing. Swanson confessed that he knew little about the process or the minor leagues.

The scout told him he might get a phone call in a few days. The call came inviting Swanson and his family to a Twins game. It was Father's Day 1987.

They met with Twins farm system director Jim Rantz, watched a bit of the game and then went to Rantz' office and Swanson signed. Soon, Swanson was off to Kenosha, Wisc.

"As a kid growing up and playing the game, that's always one of your goals, to make it to the major leagues," Swanson said.

Signing with the Twins was a step in that direction. (Go to Part 2)