Features on each member of the 1990 Tulsa Drillers, AA affiliate of the Texas Rangers.

Interview (1)
1 - Bill Haselman, Same Game
Bill Haselman made the majors and noticed everything. 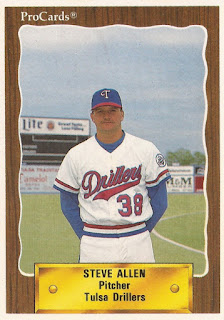 1 - Steve Allen, Looked Great
Steve Allen just looked to be consistent. He never made the bigs.
2 - Brant Alyea, Looked Like
Brant Alyea followed his dad, but not in the usual way.
3 - Jeff Andrews, Relationships Developed
Jeff Andrews has built relationships over three decades.
4 - Kevin Belcher, Instructed Them
Kevin Belcher instructed AA Jackson on an unwritten rule.
5 - Phil Bryant, Play Great
Phil Bryant signed with the Rangers out of college. He never made the bigs.
6 - Paco Burgos, Only One
Paco Burgos helped his team to the Florida State League title. He never made the bigs.
7 - Felipe Castillo, Too Much
Felipe Castillo played with future major leaguers, but he wasn't one himself.
8 - Everett Cunningham, Could Pitch
Everett Cunningham improved at single-A Gastonia, but not enough to make the majors
9 - Monty Fariss, Some Advantages
Monty Fariss hoped to make the bigs as a shortstop.
10 - Darrin Garner, Coming Along 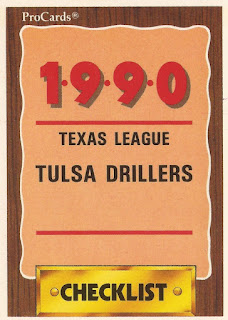 Darrin Garner's hitting came along. He made AAA, then became a coach.
11 - Greg Harrel, Listened To
Greg Harrel could trace his career back to a childhood visit to see the Rangers.
12 - Donald Harris, Run Down
Donald Harris made the majors, tried for the NFL.
13 - Bill Haselman, Best Job
Bill Haselman could catch a knuckleball.
14 - Tom Henke, Good Memories
Tom Henke gathered many good memories over his long major league career.
15 - Jim Hvizda, Will Rot
'Jim Hvizda will rot in prison for the rest of his life, and after that he will rot in hell for the cold-blooded killing of my daughter'
16 - Greg Iavarone, Returned To
Greg Iavarone returned after two seasons away. He never made the bigs.
17 - David Lynch, Curve Worked
David Lynch's curve worked well, but not enough to get him to the bigs.
18 - Terry Mathews, Real Big
Terry Mathews found his comeback major league win almost better than his first.
19 - Rob Maurer, First Season
Rob Maurer hit nearly .400 in his first minors season. He made 21 major league games.
20 - Eric McCray, Trade Talk
Eric McCray was considered in a trade to the Cubs. He never made the bigs.
21 - Dean Palmer, More Relaxed
Dean Palmer became more relaxed, then hit home runs.
22 - Roger Pavlik, Threw Strikes
Roger Pavlik threw strikes and made a major league All-Star team.
23 - Dan Peltier, Goals Achieved
Dan Peltier recalled goose bumps after a 1993 swing.
24 - Paul Postier, Felt Comfortable
Paul Postier felt comfortable playing at home, but never played in the bigs.
25 - Marv Rockman, Sidearm Delivery
Marv Rockman used his sidearm delivery to make AA, but not bigs.
26 - Dan Rohrmeier, Kid's Game
Dan Rohrmeier made the bigs after a decade in the minors.
27 - Wayne Rosenthal, His Stuff
Wayne Rosenthal helped coach the Marlins to the 2003 title.
28 - Cedric Shaw, Heckuva Game
Cedric Shaw pitched a heckuva game at single-A. He made AAA, but not bigs.
29 - Chris Shiflett, Very Frustrating
Chris Shiflett's injuries grew frustrating in seven minor league seasons.
30 - Mike Taylor, Final Frame
Mike Taylor pitched four seasons in the Rangers system. He never made the bigs.
31 - Mitch Thomas, Baseball History
Mitch Thomas played six pro seasons, later coached.
32 - Tommy Thompson, Old School
Tommy Thompson wanted his players to win.
33 - George Threadgill, Consistent Hitter
George Threadgill hit up the middle and the other way. He didn't hit for power. He also never made the majors.
34 - Walt Williams, Much Different
Walt Williams returned to the White Sox in 1988 as a coach.
Posted by Steve78 at 10:00 PM