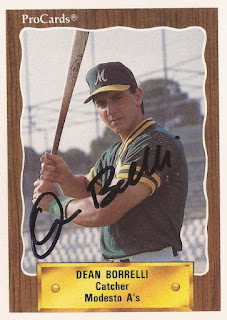 SALEM, N.H. - Dean Borrelli started his pro career with some questions, he recalled. A broken finger suffered in his final year in college will do that.

Borrelli, however, did his best to try to answer them and he did so emphatically in one game later that summer with the Oakland Athletics' short-season Southern Oregon team, he recalled in an interview with The Greatest 21 Days, as he ended that day a home run short of the cycle.

"That's one of the moments I remember the best," Borrelli recalled. "my first pro 3 for 3 game."

Borrelli hit a breaking ball into right center for one extra base hit. He recalled not being a great breaking ball hitter early on.

In all, he hit a triple, double and a single in that game, all after starting the season still short of 100 percent.

"That definitely helped confidence-wise early, to have some success," Borrelli recalled, "especially coming out of injury.

"It was definitely a lift," Borrelli added

Borrelli went on from that early injury to a pro career that spanned eight seasons. He made AAA in three of those years, battling through other injuries to get one short call away from the bigs.

When that call never came, Borrelli ended his career. He eventually returned to the game he played for so long. He returned as an instructor and coach and he continues to head Play Ball in his native Salem, N.H., offering lessons, indoor batting cages, along with AAU baseball and ASA softball programs.
Borrelli spoke to The Greatest 21 Days in early September in his Play Ball office in Salem, covering his career from growing up and learning the game in Massachusetts to his eight years as a pro and his time since.

Borrelli grew up near Salem, across the border in Massachusetts. He recalled playing in the neighborhood and getting into organized baseball at the age of 10. A neighbor encouraged him to involved, he recalled, relaying Borrelli seemed pretty good.

Borrelli played Little League on up to high school and American Legion, enjoying the challenge of it along the way.

Borrelli recalled playing well enough at Lawrence, Mass.'s Central Catholic High School to get the scouts looking his senior year. That got him thinking about the pros. He had always been one of the better players, but that next step didn't really cross his mind until then, he said.

With the scouts watching that year, Borrelli recalled trying to focus on playing. His teammates, however, sometimes made that difficult.

"The guys on my team used to give me a hard  time when a bunch of scouts would come," Borrelli recalled, "but I'd try not to think about it and just try to play normally."

"At the same time you have to throw as hard as you can. You always want to try to perform," Borrelli added. "Definitely a certain amount of pressure that came with it, but I just tried to block it out as much as I could."

With that, word was the he'd be drafted out of Central Catholic, Borrelli recalled, likely in the first five rounds. But Borrelli knew he needed to go to college and UMass-Amherst had a scholarship waiting for him.
Even after making it known that he'd be college-bound, Borrelli recalled the Cubs offering him a contract anyway after the draft. Borrelli declined.

"I wanted to get my education because I knew that was important," Borrelli said. "And I didn't think I was ready maturity-wise to go play right then. I needed the college experience."

He soon experienced the early drudgery of college. With a good catcher ahead of him, Borrelli largely remained on the bench his freshman year.

Not accustomed to sitting and all of a sudden remaining on the bench, Borrelli recalled that as difficult. He also recalled resolving himself to getting better and getting on the field.

"I worked hard in the off-season, I played summer ball and I came back saying 'I'm going to play this year," Borrelli recalled. "That helped motivate me. I always used things like that to try and motivate me."

Borrelli caught and played DH that sophomore year, then played in the Cape Cod League with Wareham the summer before his junior year. "That was a good experience," Borrelli recalled of his time with Wareham. "I improved a lot from that."

Borrelli returned to UMass that fall to a new coach, Mike Stone, who showed confidence in Borrelli.

He then injured his finger. His numbers and projections depressed by the injury, Borrelli still played well enough to get invited to an all start game played at Fenway Park. Scouts, who had also seen him during the season doubted the health of that finger.
In the end, the Athletics selected him in the 20th round of the June 1988.

"I knew I wasn't going to go as high as I probably could have or should have because of the year I had, but I was just happy to get the call," Borrelli said.

"The decision was tough to make, but I felt like I didn't want to take a chance," Borrelli said. "I needed to do it at that point."

His first destination with the Athletics: Oregon.

Borrelli had gone away to college, but still just a short drive from home. He couldn't stop home in on the West Coast. Then there was the work day, getting to know his teammates and travel.

"It was a big adjustment, but it was fun," Borrelli recalled.

His broken finger continued to hamper him early, but he came back well enough for that three-hit game and to make AA Huntsville early in the 1989 season.

He also ran into another injury - or, more accurately, as the catcher waited for a throw from the outfield, the injury ran into him. (Go to Part 2)