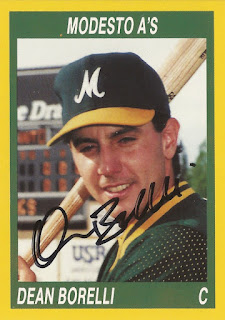 Dean Borrelli started the 1989 season platooning at catcher with the single-A Madison Muskies. Soon, though, an injury at AA pulled Borrelli up to Huntsville.

His stay there - and his season - ended up being brief.

Five games in, a May play at the plate ended with Borrelli out for the year with a busted ankle.

"Ozzie Canseco threw me like a three-hopper from left field and I had to sit there and wait," Borrelli recalled.  "The guy slid in and I broke my ankle."

"I actually played the rest of the game with a busted ankle, because I had to. It was painful, but I did it."

He then underwent surgery, spent the rest of the summer rehabbing and fought his way back to see Huntsville again in 1990.

Borrelli went on to make AAA with the Athletics three seasons later, moving one roster decision away from the bigs. In eight total pro seasons, though, Borrelli never made it up to Oakland, or the majors.

"I had some tough injuries in my career," Borrelli said. "I had some opportunities presented to me an then I had some injuries. That's the way it goes."

Borrelli spoke to The Greatest 21 Days in early September in his Play Ball office in Salem, where he now serves as a youth baseball instructor and coach.

Borrelli platooned at Madison that year in 1989 with future major leaguer Henry Mercedes. When the Athletics needed a catcher at Huntsville, though, Borrelli got the call. 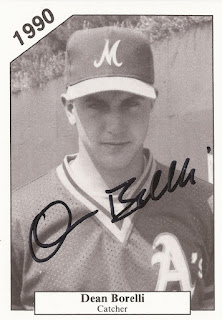 "I think they thought I was more ready to handle that," Borrelli recalled, "I was more mature and  ready defensively than he was."

Then came the ankle injury.

Borrelli recalled working through that summer to get back, after waiting to get the cast off. He also had another procedure to get the screws out. He eventually made it back in time for the fall instructional league.

If anything good came out of it, Borrelli recalled, after a season in the rigors of pro ball, he got some relative rest.

"It wasn't a good thing," he said, "but it certainly helped me get stronger otherwise with my body. So I came out in '90 in pretty good shape, ready to go."

While he played well behind the plate, other players, ones thought of more as prospects, seemed to pass Borrelli by or get the playing time ahead of him, he recalled. Borrelli ended up platooning and getting inconsistent at bats.

"It was frustrating because you wanted to play, you wanted to have the chance to show yourself and put up some numbers," Borrelli said. "But it's hard to do when you're platooning or backing up.

Borrelli finally broke through to AAA in 1993. He recalled the manager there, former major league catcher Bob Boone, liking him. Borrelli could catch, he could throw and he called a good game. His bat also picked up a bit.
Toward the end of 1993, Borrelli even thought he might get a September call up. Another injury, separated cartilage in his rib cage, hurt him there and no call up came.

Borrelli's 1994 season turned out to be his best. Back at Tacoma, he started strong both catching and hitting. In an early May game, he even picked up two hits in the same inning, knocking in two runs on the second hit.

"There was a stretch there where I felt like I couldn't get out," Borrrelli recalled, noting that early May game against Salt Lake. "I was just seeing the ball great during that time. Getting a chance to get up twice in an inning is rare, then to get two hits in an inning was pretty cool. It was fun, memorable."

Borrelli's early season work seemed to put him in position for a trip to Oakland after a slot opened up there due to an illness, he recalled. Borrelli recalled hitting as high as .335 at that early point in the year.

After the slot opened up, the manager that year called Borrelli into the office, Borrelli recalled, but informed him the call went to someone else. The reason: The other guy was on the 40-man roster. Borrelli wasn't.

"He felt bad and he apologized," Borrelli recalled. "I was like 'you got to be kidding me. What else can I do?'"

The strike that August eliminated any chance of a late-season call-up for Borrelli or anyone else. He tried the next year with the Rangers, but spent the season at AAA Oklahoma City.

Borrelli could have signed back with Oakland, but he was ready to move on. After eight seasons and with his finished degree in his pocket, he felt he needed to get started on the next phase of his life. He also was married and had started a family. He and his wife have three children, two girls and a boy.

One thing he does have: He never got released. He played in the Athletics organization for seven seasons, signed with the Rangers as a free agent and then retired.
"No one ever told me I couldn't play anymore," Borrelli said. "I did that on my own."

After he retired, Borrelli worked in the shipping business for 10 years. He then returned to the game as an instructor and a coach.

Play Ball now has locations in Salem and Nashua, N.H. and Salisbury, Mass., working with kids age 9 to 18.

"It's great. It's awesome," Borrelli said of his new career. "I love baseball. It was my life until I was almost 30 years old."

He said his turn in the business world has helped him with his own baseball business. Putting that with the baseball end made sense.

As far as working with the kids, Borrelli said each one is different. Some are there just to have fun and learn how to play. For those kids, he tries to build their confidence and get them the good fundamentals.

For the others, the ones who are looking to go on to play in high school and college, he stresses effort.

"The thing I try to tell them the most is you have to work very hard," Borrelli said. "There aren't many people, in this market at least, that are that gifted that can just show up and swing the bat and play in high school and college. You've got to work."

He focuses on the techniques, and the life lessons.

"To get there, it takes a lot of work," Borrelli said. "Dedication, motivation, all that."