Features on each member of the 1990 Savannah Cardinals, single-A affiliate of the St. Louis Cardinals.

Interview (2)
1 - Jim Ferguson, Better Way
Jim Ferguson helped the 1987 Salt Lake Trappers to a 29-game winning streak.
2 - Kevin Tahan, To Himself
Kevin Tahan got a late start. He did not take it for granted. 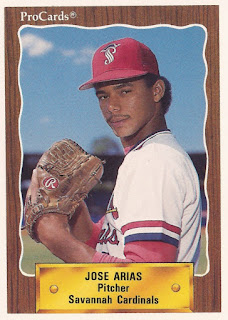 1 - Jose Arias, Didn't Stick
Jose Arias played three seasons as a pro. He made single-A.
2 - Ernie Baker, Different Priorities
Ernie Baker was fine with his career's end. He had different priorities.
3 - Scott Banton, Came Through
Scott Banton came through for his team. His runners didn't cooperate.
4 - Marcos Betances, Well Earned
Marcos Betances got a well-earned bonus with a rookie ball no-hitter.
5 - Jeff Brannon, Really Good
Jeff Brannon: 'It feels really good to do that. I mean, how could it not?'
6 - Johnny Calzado, His Part
Johnny Calzado hit bases-clearing double at single-A. He never made AA.
7 - Rick Colbert, Big Scheme
Rick Colbert played 11 seasons as a player. He never made the bigs.
8 - Paul Coleman, Impressed Enough 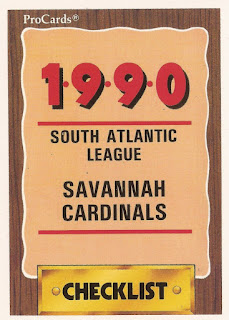 The Cardinals saw in Paul Coleman a Bo Jackson type.
9 - Steve Dixon, Much Energy
Steve Dixon pitched with much energy. He made the bigs in two seasons.
10 - Ignacio Duran, Bases Cleared
Ignacio Duran knocked a bases-loaded double in 1990. He played six seasons.
11 - Willie Espinal, First Class
Willie Espinal was called a 'first-class' pitcher in college.
12 - Luis Faccio, Strikeout Total
Luis Faccio threw a strikeout high at single-A. He played eight seasons in the minors.
13 - Jim Ferguson, Best Summer
Jim Ferguson's summer in 1987 was probably the best of his life.
14 - Dennis Fletcher, Come-Backer
Dennis Fletcher snagged a come-backer in his second pro season. He never made AA.
15 - Russ Gaston, Early Jams
Russ Gaston got out of early jams in 1990. He played three seasons as a pro.
16 - Don Green, Two Seasons
Don Green got his chance at high-A. It was the highest he got.
17 - Larry Gryskevich, Home Run
Larry Gryskevich helped his Savannah Cardinals to a win with a home run. He played two seasons.
18 - Mike Keating, Came Back
Mike Keating helped his single-A team come back. He played one season.
19 - Anthony Lewis, Helped Them
Anthony Lewis helped his AA teammates in 1996. He never helped himself to the bigs.
20 - Nicio Martinez, Too Little
Nicio Martinez came through with a single, but it was too little, too late.
21 - Tony Ochs, Missing Bat
Tony Ochs brought his bat to college. He played three seasons as a pro.
22 - Mark O'Neal, Service Provided
Mark O'Neal started as a trainer with Savannah. He made the bigs as a trainer with the Cardinals and Cubs.
23 - Mateo Ozuna, Bright Spot
Mateo Ozuna's speed made him a bright spot, not a major leaguer.
24 - Al Pacheco, Had Them
Al Pacheco got his high school to the state championship game. He played two seasons.
25 - Andy Rincon, Bad Fortune
Andy Rincon was pitching well for the Cardinals, until a come-backer broke his arm.
26 - Rick Shackle, On Top
Rick Shackle shut down the champs in college. He got into five pro seasons.
27 - Kevin Tahan, His Night
Kevin Tahan had his night in 1998.
28 - Mark Tolbert, Not Enough
Mark Tolbert hit two doubles for his Legion team. It wasn't enough.
29 - Joe Turvey, Old Time
Joe Turvey played in the mold of old-time catchers. He never made AA.
Posted by Steve78 at 9:00 PM