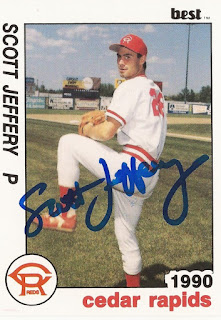 Scott Jeffery finished a game for his small Pennsylvania university and a scout soon approached.

It was spring 1987. The scout handed Jeffery a business card and invited the young hurler to an open tryout for the Pittsburgh Pirates.

Jeffery was taken aback. He'd only taken up pitching full time the previous winter and he had even considered a college that didn't offer a baseball program, but had a good music program.

"I was elated," Jeffery recalled recently to The Greatest 21 Days. "I didn't even know how to react."

"I don't know, I mean, from the time I was a little boy," Jeffery added, "I wanted to be a major league baseball player. I didn't really think that was a reality after I got out of that age. ... once that guy talked to me and invited me to that camp, that was the first instance that I thought that it was a possibility."

It was a possibility. Jeffery couldn't make that tryout, but he would be drafted and he went on to a pro career that spanned four seasons.

Jeffery never made the majors, but he had another plan. Degree in-hand, Jeffery went on to what would be his long-term career, one in education.

He started as a chemistry teacher in Baltimore. He soon returned to Pennsylvania, and he continued teaching and made the move into administration. In January 2011, he became a school district superintendent. He continues as a superintendent in 2015.
He also takes all his experiences - from the classroom, to music, to baseball - and puts them into his work.

"I just really try to spread the message to the kids that you can be whoever you want to be," Jeffery said. "You can be the jock. You can be the band geek. You can be the geek in the classroom. You can do it all and be successful at it all because I'm living proof of that."

Jeffery spoke to The Greatest 21 Days recently by phone from his Scranton, Pa.-area home. He covered his road to the pros, his brief career there and he talked about his educational career since.

Jeffery got involved in the game at a young age, playing Wiffle ball and watching the Yankees with his father. He also remembers going to watch his father play in fast-pitch softball games.

Jeffery soon found himself in competitive baseball, Little League on up. He was an all-star at each stop. In high school, he was an infielder, playing third his junior year and second his senior year. He recalled pitching only a handful of times.

Also at Hornell High School, Jeffery played the Trumpet. It was that and his interest in chemistry that led him to his initial choice of college, Alfred State. He was going to major in chemistry and join the school's traveling band. The school had no baseball program.

Jeffery listened and he went to Mansfield. Not having been recruited, Jeffery walked on and he made the team. He also kept up his studies, making them the priority.

"I was a chemistry major and I was all about academics," Jeffery said. "I would report to practice and games late because I had chemistry labs that were running late. Baseball was really secondary initially."

Initially, also, his playing time was limited. In the spring of his freshman year, he recalled getting only 11 at bats.

But he was ultimately helped by his ability to play multiple positions. That's what he could do growing up.
That extended to pitching in his sophomore year, at least throwing batting practice. He recalled the batting practice work helped him get a good feel for the strike zone.

After his sophomore year, though, Jeffery's team needed pitchers.  Pitchers graduated and moved on. Jeffery was the guy tapped to take the mound.

"I looked at it as a great opportunity," Jeffery said of turning pitcher. "My freshman year I had a handful of at bats, my sophomore year I had 40-45 at bats. I was just a utility guy that would maybe get in if I had an opportunity."
That pitching opportunity almost didn't fully materialize. Late in the fall of his junior year, Jeffery took part in a football game with his fellow baseball players. He was tackled and his collar bone separated from his throwing shoulder.

"I remember just thinking that my whole baseball career was over," Jeffery said.

But through physical therapy and strength training, he was able to build his shoulder back up again. By the time spring drills came around in February, Jeffery recalled he was actually throwing harder.

Back on the field, Jeffery also really learned the mechanics of pitching. He was no longer a pitcher on the side, he was a pitcher.

He also began to get the notice of scouts, including that one from the Pirates. Mansfield also had success on the field, making it to the conference playoffs. Jeffery also was named conference pitcher of the year.

In the playoffs, Jeffery recalled throwing a complete game in one contest on 99 pitches. He also recalled striking out nine. Brought back on short rest, Jeffery didn't do as well and his team was eliminated.

Jeffery returned home and then got a phone call. It was a scout for the Reds. (Go to Part 2)