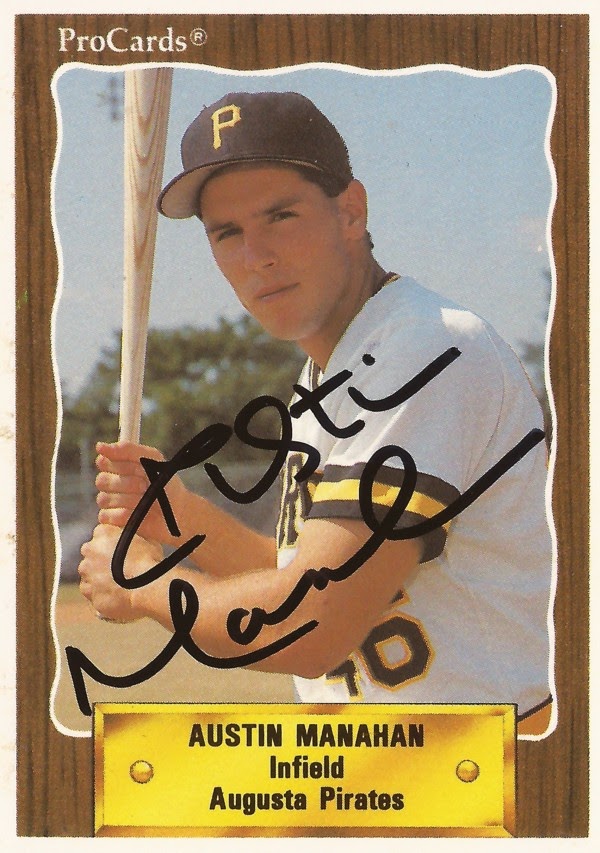 Austin Manahan had gotten word that he might go high in the draft, but he didn't think he'd go that high.

The Arizona high school product had been planning to go to Arizona State and play ball there. But those plans changed and they changed as quick as 13 names could be called.

Manahan was a first-round pick, taken 13th overall by the Pirates. Only 12 players in the country were taken ahead of him.

"Fifth or sixth round might have been more of a 'Oh, boy, what do I do?'" Manahan recalled to The Greatest 21 Days recently, "But, first round, no, I was going."

At 18 years old, Manahan quickly signed and he was on his way to his career in professional baseball.

It was a career that ultimately ended in disappointment, Manahan never living up to the expectations of that high selection. He never made the majors.

"Hindsight's 20/20," Manahan said, "but at that point there was no choice for me. I figured I was a first-round draft pick, you get a good shot at it and I did."

Manahan spoke to The Greatest 21 Days recently by phone from his Arizona home, where he now works as a real estate agent.
Manahan told of catching the eye of scouts during his senior year in high school and then his selection in the first round. But his career didn't start off as he or the Pirates had hoped.

Manahan recalled how he had trouble with the daily rigors of minor league baseball from the start. He'd start seasons fresh, but soon found himself drained and fighting to stay on the field.

By the time his career was done, Manahan had played in eight professional seasons for four different organizations. His stops included Welland, Augusta, Carolina and Orlando. He never made it above AA.

Manahan was born in Kansas City, the son of an airline pilot. He started playing baseball around the age of 5 or 6. His first time in organized ball came at age 7. His older brother Tony also played.

"We didn't do much besides baseball," Manahan recalled. "Summer came along and it was baseball time."

When Manahan was about 10 years old, he and his family moved to Arizona. Manahan recalled one of the reasons for the move was so Manahan and his brother could play ball longer.
As he played, though, Manahan recalled never really being the best player on his teams. His brother, he recalled, was always better. Other kids were better, too.

But Manahan was good, too.
In his freshman year at Horizon High School in Scottsdale, Manahan got to play with the varsity team. He also found himself in over his head, unsure if he could ever catch up to pitchers at that level.

When the high school season started, Manahan continued hitting well. He also played well at shortstop. Pretty much from then on, though, the scouts were at all his games, he recalled.

Manahan also gave them something to watch. He hit .526.

"I just kind of got on track that year and I was healthy," Manahan said.

Manahan's brother Tony got drafted out of Horizon a year before Manahan, taken in the 32nd round by the Astros. Tony, though, chose to go to Arizona State. Another team looking at Tony was the Cubs.
The night before Manahan was drafted, his brother called from Omaha, where Arizona State was playing in the College World Series. Tony had heard that the Cubs were interested in Austin. They were interested in him in the second round.

The Cubs scout had seen Manahan earlier that year. He hit a leadoff home run. His team then batted around and he hit a second home run in the same inning.

"I thought, 'Wow, I'm going to have to think about playing professional baseball instead of going to ASU,'" Manahan recalled of hearing the second-round prediction, "because I really wanted to go to ASU."

Then his decision was seemingly made for him and it was made by the Pirates and their first-round pick.

A few weeks before the draft, Manahan recalled, the Pirates came by to give him a closer look. Manahan's high school coach threw him batting practice and Manahan hit off him using a wooden bat.

"I had one of those days where it kid of seemed like every other ball I hit over the fence," Manahan said. "Of course, I was fresh, my legs were fresh, my arm was fresh."

The key word there, though, was fresh. Manahan would soon find out the daily grind of professional baseball was just that, a grind. It also wasn't at all what he had hoped. (Go to Part 2)