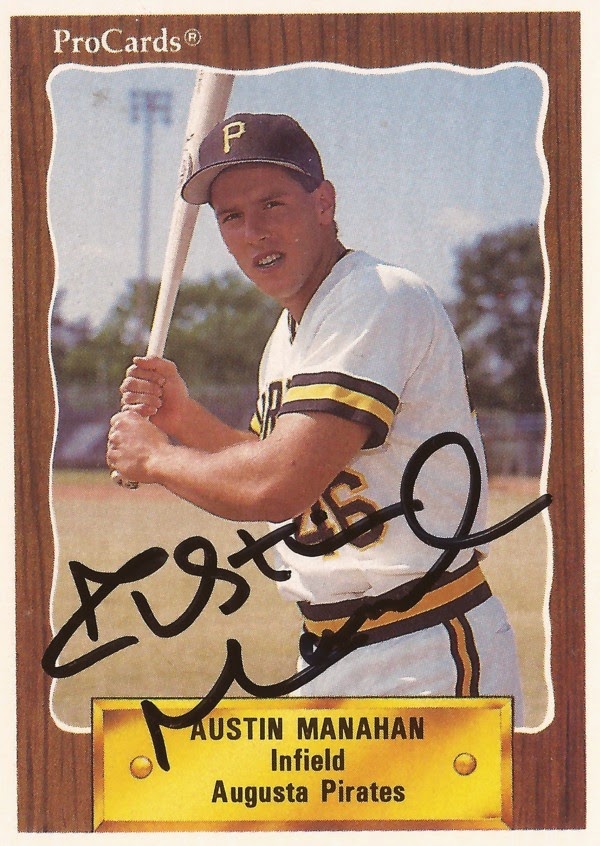 Austin Manahan wasn't feeling well that day, so when the phone rang, the high schooler was slow to respond.

The call came with big news: Manahan had been drafted in the first round by the Pittsburgh Pirates, taken 13th overall. The news was delivered by Pirates scout Angel Figueroa.

"I was groggy, I had just woke up," Manahan recalled recently of that call. "He was a little shocked because he thought I'd be excited."

Manahan was excited, he explained, it was just that he wasn't feeling that well. Figueroa was over later that afternoon, Manahan signed and the young infielder was off to Pirates camp in Florida.

As it turned out, though, what excitement Manahan had soon evaporated in the heat of professional baseball. The 18-year-old took the field in rookie ball and the all that confidence and skill he'd shown on his Arizona high school diamond was gone.
What was left was a first-round pick who played 64 games and couldn't even hit .200.

"Well, it was horrible," Manahan said frankly of his transition from high school to the pros. "Here you are, you're a first-round pick, you hit .526 (in high school), you're playing twice a week - I had no clue.

"I think I thought it was going to be easier playing every day and physically, mentally, it was very difficult," Manahan added. "I'm not so sure my body was meant to play every day."

Manahan had played in eight professional seasons for four different organizations. His stops included Welland, Augusta, Carolina and Orlando. He never made it above AA.

Manahan spoke to The Greatest 21 Days recently by phone from his Arizona home, where he now works as a real estate agent.

Manahan told of catching the eye of scouts during his senior year in high school, his selection in the first round and then his immediate troubles with the daily rigors of minor league baseball.

And those troubles never really went away.

Manahan played his first year at rookie Princeton. In those 64 games, Manahan hit six home runs and knocked in 34. His final average came in at .181.

He recalled dealing with the wooden bat of the pros, the hard throwers in the pros. He didn't have a good grasp of much of the things he needed to have a grasp of to be successful, he recalled.

He had no real approach in the batters box, he recalled.

"I didn't even do a good job of picking the ball up out of the pitcher's hand," Manahan said. "I mean, these are basic things."

All through that, he was also the guy everyone was looking at.

"I was trying to be a superstar," Manahan said, "because I was a first-round pick. And, again, the fundamentals weren't there. I was trying too hard."

"I was out there just really raw and over-swinging," Manahan said. "And I was just throwing the ball every which direction, making throwing errors left and right. It was just a nightmare, really."

Manahan's struggles continued in 1989 at Princeton and at short-season Welland. In 69 games between them he hit .219. He hit four home runs with 24 RBI.

He then played 1990 between single-A Augusta and high-A Salem. He also actually had a good year. He hit .302 in 94 games at Augusta and .279 in 41 games at Salem.
It would have been an even better year, Manahan recalled, if he didn't go into a prolonged 12-game slump to end his time at Augusta.

He had three or four four-hit games and even a five hit game, he recalled. He also seemed to be able to fight to get a base hit that year, he said, but mostly early in the season. That was before his legs got tired.

His overall good season got him thinking again about moving up, he recalled. He'd had a rough time his first two years. This third year, though, seemed different.

But there was also reality, he said.

"Really, ultimately, when I was going good, I didn't know why," Manahan said. "When I was in a slump, I was still in a slump.

"Yeah, the season was better," he added, "but I really didn't have a clue what I was doing out there."

It also came at a cost, Manahan recalled. "That took a lot out of me," Manahan said.

After that season, Manahan continued playing in winter ball, sent by the Pirates to play ball in Australia. But he couldn't keep up that season he had, either in Australia or in 1991 back in the minors. (Go to Part 3)