Features on each member of the 1990 Salinas Spurs, an independent team in the California League. Players featured were included in that year's team set.

Interview (1)
1 - Quinn Marsh: Quinn Marsh never expected to be a pro ball player. He then grew into one. 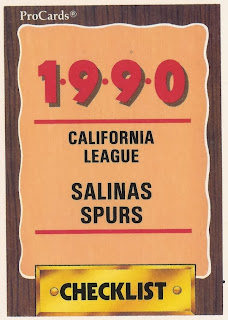 Paul Alegre: Karate made Paul Alegre a more disciplined hitter, enough to play as a pro. He only played 17 games.
2 - Bill Carlson: A Giants scout gave Bill Carlson confidence. He played five seasons as a pro, never made AA.
3 - Carlos Carrasco: Carlos Carrasco played eight seasons as a pro. He never made AA.
4 - Koichi Emoto: Koichi Emoto had good experience in Japan, he then got experience in America, in the California League.
5 - Brent Hahn: Brent Hahn took advantage of his Japanese manager's coaching. He only played two seasons as a pro.
6 - Wayne Housie: Wayne Housie didn't care how he made the Red Sox, all that mattered was he was there.
7 - Scott Jaster: Scott Jaster concentrated and spent nine seasons as a pro. He never made the majors.
8 - Hide Koga: Hide Koga's task with Salinas in 1990 was to mold his team of American and Japanese players into one unit.
9 - Takayuki Kono: Takayuki Kono took lessons from his 15 seasons in Nippon Professional Baseball to years as a coach.
10 - Ed Landphere: Ed Landphere helped his Cal State-Santa Barbara team to a 1988 win. He played just 18 games as a pro.
11 - Quinn Marsh: Quinn Marsh helped break record streak of home state team. He played five seasons, never made the bigs.
12 - Seiichi Murakami: Seiichi Murakami saw time in 1990 on both sides of Pacific, at high-A in the U.S. and in Japan.
13 - Kenichi Otsuka: Kenichi Otsuka saw time in three Nippon Professional Baseball seasons, for a game apiece.
14 - Yoshiki Otsuka: Yoshiki Otsuka got into 4 NPB games in 1994, but hit two home runs. He played in eight seasons.
15 - Greg Page: Greg Page did his part in a college tourney win. He played three seasons as a pro, never made AA.
16 - Corey Paul: Corey Paul took four seasons off, then returned. And then he played in Japan.
17 - Jose Peguero: Jose Peguero took time off from baseball, he then returned and found independent ball.
18 - John Reilley: John Reilley was an absolute key for USC. He later played four seasons as a pro, but never made the majors.
19 - Pete Rowe: All Pete Rowe wanted was a fair shot. He got it, but it didn't pan out and he never made the majors.
20 - Shigeki Sasaki: Shigeki Sasaki picked up his second 1990 win in a July game. He only got three on the year, to 14 losses.
21 - James Shevlin: James Shevlin shared a name with a major leaguer. He didn't share the title major leaguer.
22 - Sean Thompson: A Giants scout thought Sean Thompson's future was at second base. Thompson only played two seasons as a pro.
23 - Kenichi Uchiyama: Kenichi Uchiyama spent time as the Salinas Spurs closer in 1990, he then pitched briefly in Japan's Nippon Professional Baseball.
24 - Kenichi Yamanouchi: Kenichi Yamanouchi once hit three home runs over a two-game span. He made Nippon Professional Baseball for seven games.
25 - Shikato Yanagita: Shikato Yanagita got his strikeouts under control. He then made Nippon Professional Baseball over nine seasons.
Posted by Steve78 at 9:00 PM