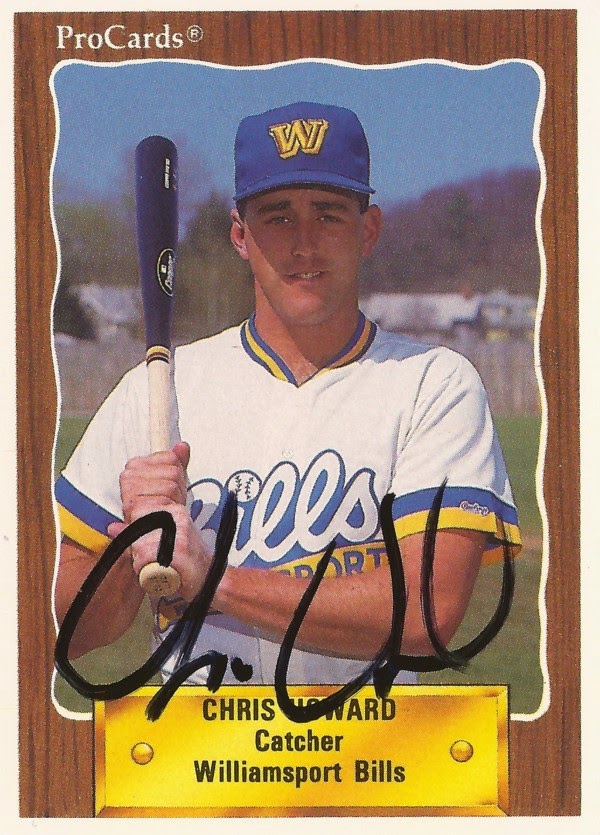 UTICA, NY - The first pitch Seattle Mariner Chris Howard saw in the majors, he recalled, was a pitch he had no chance hitting.

It was a breaking ball thrown by Kansas City Royal and Cy Young winner Mark Davis, one that seemingly dropped from the top of the Kauffman Stadium scoreboard crown on down.

"I'd never seen a breaking ball like that," Howard recalled recently to The Greatest 21 Days of that September 1991 contest. "The first thing that went through my head was the first thing straight you see you'd better swing at it because you're not hitting that pitch.

"The next pitch he threw me was a fastball," Howard recalled, "and I got a good swing on it."

That he was there at all was a wonder, considering where and when he was drafted. Howard was selected by the Mariners in the 41st round of the 1988 draft. It is a round that no longer exists and Howard made the bigs before 1991 was out.

"I always took great pride in that I was a 41st-round draft pick who had his debut in the majors in really three years," Howard said. "I was always really proud of that, took pride in that."

Howard went on to see playing time in three major league seasons and get a call up in a fourth. Overall, he saw time in 22 major league games and picked up six hits over 32 at bats.
Howard has since returned to the game as head coach of the Penn College baseball team. He spoke to The Greatest 21 Days before his Penn College Wildcats took on the State University of New York Polytechnic Institute in Utica, NY.

Howard covered his life in baseball from growing up the son of a former minor leaguer in Kansas City to using football to go to college and play baseball. He recounted his quick rise to the majors and efforts to get back and stay in the bigs.

He also spoke about getting back into the game as head baseball coach at Penn College after years away and his reoccurring connection Williamsport.

Howard was born in California, where his father was in the Marines. He spent all of 10 days there before the family moved on to Kansas City, where he would grow up.

For Howard's first two summers, his dad was also on the road. His father Richard Howard played in the Mets system for 1966 and 1967. Richard Howard made AA both seasons, but didn't make it higher.

Howard grew up in Roeland Park, Kan., just outside of Kansas City - he made his major league debut with the Mariners in his hometown. Much of his early coaching came from his father, who had been a catcher just like his son would be.

Howard recalled seeing football as his way into college to play baseball. He'd spoken to several schools about the possibility. Oklahoma and Switzer were fine with it.

Howard said he thought all along about the possibility of playing baseball professionally, even in high school.

"That was always kind of my driving force. I always thought I had a shot," Howard said.

He started really thinking it could be real when his hitting picked up in college.

He did have some troubles in college. He got to play at Oklahoma, but it wasn't the position he had hoped. He ended up playing some third base and he played at designated hitter. He did that after always having been a catcher.

"After a couple years I really made the determination that I was going to have a shot at pro ball, I was going to need to be somewhere where catch," Howard said.

An Oklahoma assistant took a new job at the University of Southwestern Louisiana, now the University of Louisiana at Lafayette, and Howard joined him.
Howard served as catcher for a season and then came the 1988 draft. He'd had some scouts talk to him in the lead up to the draft, so he had a good idea that he'd be taken. He never heard from the Mariners.

He heard from a different team during the draft, but he never found out the story behind it. Howard recalled hearing from a scout for the Cardinals. St. Louis, the scout relayed, was going to take Howard in the 10th round.

As he learned two days, he wasn't picked by them. He wasn't picked until more than 30 rounds later. He'd been getting increasingly worried after there was no second call from St. Louis.

"On the third day of the draft, at about 11 at night, I get a call from Tom Mooney, the scout from Seattle," Howard recalled. "He said, 'Congratulations you've been selected in the draft.'

"I remember thinking to myself maybe I got Seattle and St. Louis mixed up until I asked him what round I went in," Howard said.

Howard still had eligibility left in Louisiana, but however he was drafted, he was turning pro.

"They came down and I signed right away," Howard said. "I really kind of used that as motivation to get where I needed to go."

Howard played his first season with the Mariners between short-season Bellingham and single-A Wausau. He played 1989 between Wausau and AA Williamsport. He got into 56 games at Williamsport that year and hit .253.

Taken by the Mariners in the same draft as Howard were two other catchers. The Mariners took those two catchers in the second and third rounds. That left Howard with that much more of a hill to climb in the organization.

"I just made up my mind that you've got to go out there and prove yourself on the field," Howard said. "A lot of good things have to happen too. You always need breaks."

Howard got his break when one of those catchers struggled. Howard jumped over him and didn't look back.

Howard got his time at Williamsport in 1989. He returned for all of 1990. All the while he showed off his defense. He recalled one year being named one of the top-rated catchers in the league.

Howard made it to AAA Calgary for 1991. That September, he was in the major leagues. (Go to Part 2)