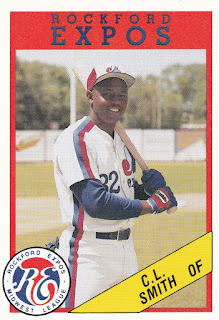 West Palm Beach Expos hitters couldn't generate enough offense this night in July 1989 and among them was their left fielder C.L. Smith, according to The Lakeland Ledger.

Smith stepped to the plate four times against the Lakeland Tigers and each time came away without a hit, according to the Ledger.

The single-A Expos went on to lose the game by a score of 6 to 2. Smith went on to a career that lasted just one more season. He never made AA.

Smith's career began that year in 1989, taken by the Expos in the 30th round of the draft out of Tennessee State University. Smith was also credited under the Charlie Smith and his formal name, Charles LaVonn Smith.

Smith's career started with the Expos in the rookie Gulf Coast League and at West Palm Beach. He saw seven games in the GCL and went 6 for 22.

Smith moved to single-A Rockford for 1990. He got into 81 games and hit .223. He hit four home runs and stole 16 bases. That season marked his final season as a pro.