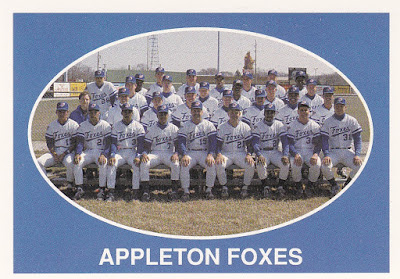 Features on each member of the 1990 Appleton Foxes, single-A affiliate of the Kansas City Royals. Players featured are as included in that year's team set. Click on the player's name to read more.

Interview (1)
1 - Rich Tunison, Bigger Deal
Rich Tunison got noticed at a junior college All-Star game. He then became the Ryoals second-round pick in 1989. 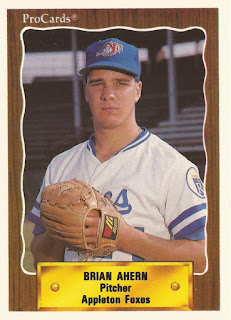 1 - Brian Ahern, Broken Bat
Brian Ahern broke a bat in college - an aluminum bat. He did it with a pitch. He played seven seasons, never made the bigs.
2 - Francisco Baez, Sterling Night
Francisco Baez had a sterling night at Eugene. He played five seasons, never made AA.
3 - Kirk Baldwin, First Outing
Kirk Baldwin picked up Eugene's first win of the year. It was his only win.
4 - Joe Breeden, Most Important
Joe Breeden learned the fundamentals of catching over a career that's lasted three decades.
5 - Gray Caraballo, Very Strong
Gary Caraballo did his job in eight pro seasons. He later lost, then regained his eyesight.
6 - John Conner, More Confidence
John Conner hit his pitch limit in single-A game, then got taken out - in the middle of a no-hitter.
7 - Francisco Garcia, Lead Off
Francisco Garcia did what a lead-off hitter should at single-A. He played just two seasons.
8 - John Gilcrist, Tried Everything
John Gilcrist's team tried everything to break losing streak. Whatever he tried, Gilcrist never made AA. 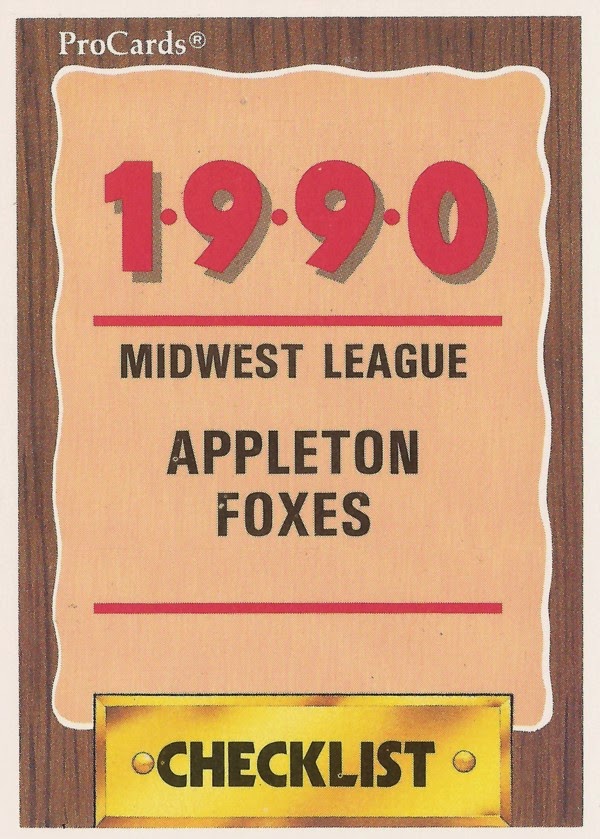 9 - Grant Griesser, Some Tools
Grant Griesser had the tools for a short playing career, long coaching career.
10 - John Gross, Eluded Him
John Gross pitched over five seasons, but a spot at AA or higher eluded him.
11 - Arned Hernandez, Home Run
Arned Hernandez played in three professionals seasons. He never made it out of single-A.
12 - Jake Jacobs, First Start
Jake Jacobs was nervous for his first pro start. He played three seasons, never made AA.
13 - Mike Jirschele, That Uniform
Mike Jirschele waited 37 years to make the majors. He finally made it as a coach with the Royals.
14 - Matt Karchner, Own Luck
Matt Karchner made his own luck and he played in six major league seasons.
15 - David King, Get Started
David King wanted to go out and start his career. His pro career lasted just three seasons.
16 - Herb Milton, Youth Coach
Herb Milton played three professional seasons. He later became a youth coach.
17 - Geovany Miranda, No Rest
Geovany Miranda came to the U.S. for baseball. Years later, he hoped game would keep him here
18 - Kerwin Moore, Away from Home
Kerwin Moore got out of inner city Detroit and made the majors for 22 games.
19 - Andre Rabouin, Part Of
Andre Rabouin has spent four decades in the game. He's now a coach with Gallaudet.
20 - Fred Russell, Hitting Now
Fred Russell hit well at Eugene. He never hit well enough to make AA.
21 - Colin Ryan, Baseball Mind
Colin Ryan had a good baseball mind at Maine. He took that to three pro seasons.
22 - Chris Schaefer, Everybody's Goal
Chris Schaefer's goal was like everybody's: to move up. He played in just three pro seasons.
23 - Steve Shifflett, Hard Game
Steve Shifflett got one season with the Royals. He worked to get back, but he didn't make it.
24 - David Solseth, Could Hit
David Solseth had a .303 average his first season. It couldn't take him to the bigs.
25 - Rod Stillwell, To Instill
Rod Stillwell worked hard and played two seasons as pro. He later became a high school coach.
26 - Louis Talbert, Finished Early
Louis Talbert helped Eugene to victory with his slider. He only played three seasons.
27 - Rich Tunison, Toughest Thing
Rich Tunison was a pure switch hitter. But he couldn't hit himself to the majors.
28 - Pedro Vazquez, Career High
Pedro Vazquez picked up a career-high 4 RBIs in a 1991 high-A game. He never made the bigs.
29 - Skip Wiley, Phenomenal Ratio
Skip Wiley kept runners off base at Eugene. He played five seasons, but he never made AA.
Posted by Steve78 at 3:25 PM