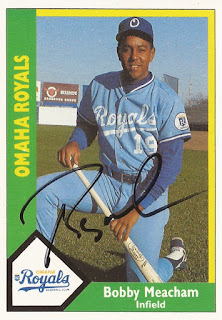 MANCHESTER, N.H. - Bobby Meacham's manager at AAA Columbus Johnny Oates came up to him before this June 1983 game and relayed that infield practice was off, at least for Meacham.

In his third pro season, the former first-round draft pick at first thought he was in trouble, he recalled to The Greatest 21 Days.

Oates quickly revealed the reason: Meacham was going to the majors.

"He said, 'Well, you're not only not taking infield, you're going to New York tomorrow,'" Meacham recalled, "'so we want you to just relax, sit on the bench and tomorrow morning you're flying to New York.'

"That was just one of those shocking moments where I never - I didn't expected it at all at the time," Meacham said.

Meacham went on to play in six major league seasons, all for the Yankees. He also had his share of other shocking moments, or at least good stories, both on the field and off it related to the top Yankee, George Steinbrenner.

He also tacked on two years at the end, spent at AAA with the Pirates and the Royals as the extra guy on the bench catching bullpens.
He's since gone on to a long career in coaching, as a manager in the minors and as a base coach in the majors. He's continued that in 2016 and 2017 with the Blue Jays. He managed 2016 at AA New Hampshire and took the top job for 2017 at AAA Buffalo, a position where he's the one relaying the calls to the bigs.

Of his style, Meacham said he tries to incorporate his own experiences, all of them.

"I try to tell them I've been through everything you've been through. I was you," Meacham said, noting the range from first-rounder and major leaguer to hanging on in the minors. "I try to relate situations to them that they can relate to, whether I'm talking to our backup catcher or to our No. 1 pick."

Meacham spoke to The Greatest 21 Days in September 2016, as his third season at New Hampshire wound down. He touched on his time growing up and attending college in California to his time in the Bronx playing parts of those six seasons, during three separate managerial stints of Billy Martin.

Meacham grew up playing baseball in Southern California. He recalled starting at age 7, following his family. He remembered his mother's side of the family as big Dodger fans.

His brother was four years older and kind of led the way for Meacham. "We just loved baseball as a family," Meacham said.

By the time high school came around, Meacham was playing well. He remembered one of his first realizations that scouts were around in his sophomore year at Santa Ana's Mater Dei High School. The scouts' focus that day: Opposing pitcher Andy Rincon, Meacham recalled.
Meacham recalled seeing it as an opportunity to make his own introduction.

By Meacham's junior year, he was on the scouts' radar, too, recalled.

As his senior year came to a close and the draft approached, it became clear that he probably would be drafted. He thought about turning pro then, but he realized he wasn't ready. The White Sox took him in the 14th round, but he chose instead to go to San Diego State.

"I could run, I could throw, I was a pretty good hitter," Meacham recalled, "but I was a really raw talent."

He also had his education in his mind - his parents were both teachers. Once he found out he wasn't taken high enough to make him reassess his plans, he was off to San Diego State.

Meacham arrived, and he recalled making a lot of errors early. He also needed to develop other skills, like stealing bases.

He worked with head coach Jim Dietz on his swing, as well as on a new throwing style that Meacham called a bit unorthodox, but one that worked for him.
"That was a big plus in my career," Meacham said of the throwing style, "getting those throws where they were supposed to go."

Along with Dietz, Meacham had some good teammates, too. Among them: Future Hall of Famer Tony Gwynn and future major leaguer Al Newman.

Meacham's college work showed in the run up to the 1981 draft. Talk was he'd go first round, in the top ten. Talk was, the White Sox, with the seventh pick, and the Cardinals, with the eighth, were interested, Meacham recalled.

A top Cardinal scout even took him to dinner before the draft, making Meacham fairly sure they'd take him if Meacham was available. Turns out, he was. The White Sox passed, instead taking Daryl Boston.

The Cardinals selected Meacham and Meacham started his pro career.

"I had a good college career," Meacham said. "Now it was fun to get out there and see how I compare with the rest of the professional players."

Within two years, Meacham was in his first stint with the professional players in the majors. (Go to Part 2)