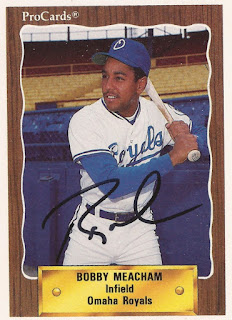 Bobby Meacham made the Yankees out of spring training 1984, but an ill-timed error - and a snap decision by the club's hands-on owner - made the trip a brief one.

Two games into his second major league season, the shortstop Meacham booted a ball late and the Yankees lost.

In a much publicized decision, Yankee owner George Steinbrenner quickly stepped in and ordered Meacham back to the minors - to AA.

"It was kind of crazy," Meacham recalled to The Greatest 21 Days. "It was one of those things where everybody was shocked that it happened. Everybody's on a short leash with George, especially if you don't have a long contract."

Meacham had seen the majors the previous year and he knew if he played well enough they'd have to call him back up, he said.

"My thought process was, I'm just going to keep playing," Meacham said. "If keep getting better, realize my potential, somebody's going to trade for me again or I'll get called back up because they have no choice."
"I didn't really flinch at all, to be honest with you," Meacham added a short time later. "I felt determined to belong there and determined to make sure he couldn't do without me."

Meacham returned to the Bronx in mid-June and he stayed there for the rest of that year and the next. In all, Meacham saw time in six major league seasons, all with the Yankees.

He's since gone on to a career as a minor league manager and major league coach. He spoke with The Greatest 21 Days at Northeast Delta Dental Stadium near the close of the 2016 season, when he served with the Blue Jays as manager at AA New Hampshire. For 2017, he's moved up to manage AAA Buffalo.

Meacham's pro career began as a first-round pick for the Cardinals in 1981. He arrived at single-A Gastonia that June and he recalled starting poorly. He wasn't prepared for the level of competition.

He ended up hitting .182 in a season Meacham called humbling. The shortstop taken eighth overall could seemingly hear the whispers.

"I went into instructional league with the idea of I'm going to prove they took the right guy," Meacham said. "I'm not going to embarrass myself again out there."

Meacham did better, he recalled. He also learned a new skill: Switch hitting.
"I really bore down and prepared myself for not settling for being anything but the best," Meacham said, "and I kind of got back to what I was in college."

Meacham used his new skills to increase his average to .259 at single-A St. Petersburg in 1982.

That December, the Cardinals sent Meacham and Stan Javier to the Yankees in a make-good trade for an earlier Willie McGee deal. Meacham never expected to stay with the Cardinals his whole career, he recalled. But he didn't expect the trade, either.

But the trade gave him the opportunity to show what he could do with the Yankees in big league camp.

Meacham recalled having one of the best springs he could have, hitting a couple home runs, stealing some bases and hitting around .350. He also got to impress Yankees manager Billy Martin off the field with his knowledge of the game.

For his efforts, he skipped right over AA and started the year at AAA Columbus.

"When they called me up in June, I was hitting .270, and I fit right in," Meacham said, "because Billy knew I knew what I was doing."
Meacham got into 22 games for the Yankees that year. He hit .238, with eight stolen bases. He then made the club out of spring training in 1984 before being sent back down as a result of Steinbrenner's order.

On his return, Meacham experienced some career firsts: In August, he hit his first major league home run.

Facing the Angels' Ron Romanick at home, Meacham hit a solo shot and he hit it left-handed. He recalled getting instructions to shorten up his swing, and it worked.

"I got to face him at Yankee Stadium and just got lucky down and in," Meacham said. "That short swing got him on that short porch in right field."

"I never thought about homers," Meacham said. "I just thought about moments: Getting to big leagues, doing well. It was one of those things that clicked, I can put that in the column."

But he did allow himself some fun afterward. Of that home run, Meacham told reporters at the time that he only had 499 home runs to go.

"The big picture was there," Meacham said of that, with a laugh. "But for me, the little things like a home run, that was a joke almost, yeah, 499 to go."

Meacham still had four seasons to go with the Yankees - and his long career as a manager and a coach ahead. (Go to Part 3)