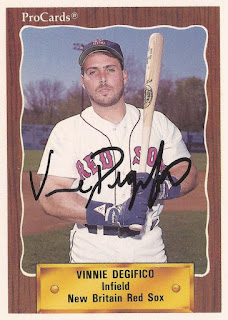 KEENE, NH - Before a recent game in New Hampshire, Vinnie Degifico looked forward to the draft.

The assistant coach at the University of Southern Maine, Degifico referenced a scout in the stands.

"The University of Southern Maine's a great place, great players," Degifico told the Greatest 21 Days as his team warmed up to play Keene State recently. "We've got one, Sammy Dexter, I hope he gets a chance. A scout's here to watch him."

Years earlier, scouts attended Southern Maine games to watch Degifico. Degifico went on from Southern Maine to a pro career that spanned five seasons, all in the Red Sox system.

Along the way, he played with the likes of Jeff Bagwell and Eric Wedge. He made it as high as AA himself before an off-field injury slowed and ultimately stopped his advance.

He then returned to the Portland-area school and soon became an administrator and a coach. He's served there since, seeing young players off to their careers, sometimes to the pros.

"It was a great experience," Degifico said of his own time in the pros. "I hope some of these kids in the future get a chance to do it. I wouldn't turn it back for anything. There's a lot of great memories."
Degifico spoke to the Greatest 21 Days before his USM Huskies took on the Keene State Owls in a Little East Conference double-header.

He covered his career in the game from growing up and learning the game in Maine, to his breakout seasons at Southern Maine and his time in the pros. He talked of the pickup basketball injury that led to his career's end, short of the majors.

Degifico also talked of playing for a Southern Maine coach who helped shape his career, the same coach he has coached under for more than two decades, Ed Flaherty.

Degifico, now 51, grew up in South Portland in what he described as a basketball family. His father Vincent played for the Italian international team when he'd get leave during the Korean War, Degifico recalled.

By extension, that made Degifico a big-time basketball player growing up, he recalled. He also played baseball and football.

"I used to love when the spring came and just get a break from basketball and move into baseball," Degifico said, adding later, "Even though it was slower, it kind of took over for me as my No. 1 sport."

His family, he recalled, supported him in his decision.

A top hitter in high school, Degifico chose Southern Maine. After being injured his first year there, Degifico returned for his sophomore year in 1986 as Flaherty took over the club.

Degifico knew Flaherty from high school and he jumped at the chance to play for him in college. Degifico also soon took off.

Degifico put the credit for his success squarely with Flaherty, whose son Ryan Flaherty has played in major league seasons with the Orioles in 2016.

Flaherty defined Degifico's swing, he recalled, taught him to keep his hands in. Flaherty instilled those skills through seemingly endless hours of batting practice and drills.

His sophomore performance proved attention-getting. Scouts came calling for Degifico.
Degifico recalled the scouts attention becoming known through draft cards. The scouts wanted his information. He recalled not taking them seriously at first.

"I kind of just tucked them away in my bag," Degifico said. "I didn't pay attention to them. Then finally (Flaherty) got it through my head that it was time to start filling out those draft cards and looking to go to the next level."

Coming off his 1986 season and follow-up year in 1987, Degifico expected he'd be drafted. He just didn't know where - or when.

As it turned out, he went to the Red Sox in the 17th round.

He knew two Red Sox scouts had paid attention, Bill Enos and George Digby. Both saw him quite a bit, either when he played at home in the Northeast or when the team got down south. Still, he didn't think Boston would be the team.

"The Red Sox was kind of a dream," Degifico said, "but the last place I thought I'd go.

But the Red Sox it was and he soon found himself on his way to Elmira, NY, to start his pro career. (Go to Part 2)