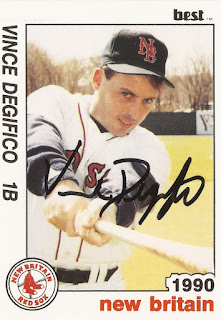 After playing five seasons as a pro, Vinnie Degifico has spent more than two decades as an assistant coach at the University of Southern Maine.

He's helped head coach Ed Flaherty work with players, sending a few on to the pros and the rest on to successful careers elsewhere.

Central to Degifico's approach has been his own experience in the pros, a career that saw him make AA and play with the likes of Jeff Bagwell, Eric Wedge and Todd Pratt.

"The kids are great," Degifico told The Greatest 21 Days recently of his players. "There's always the respect factor from them. They know where I played. They know how it ended."

For Degifico, it started with his selection by the Red Sox in the 17th round of the draft out of Southern Maine.

It ended with an ill-advised pickup basketball game, a shattered ankle leading to the end of his playing career, but the beginning of his coaching career.

"It's been fun," Degifico said. "I've had a lot of great players. We've had drafted kids off the team that we've helped out - and it's giving back to the game."
Degifico's playing career began with the Red Sox in 1987, sent by the club to start at short-season Elmira.

Degifico called his time at Elmira a transition period from his college.

"It was all about learning how to use the wooden bat," Degifico said. "Things moved a little bit quicker. The pitching down there - they didn't have great command of the ball when they were on the mound and I was glad to get out of there."

Soon after the 1989 draft, Degifico recalled getting a new teammate and roommate with the arrival of Bagwell.

Degifico recalled meeting Bagwell at the Winter Haven batting cages. Bagwell walked over and they struck up a conversation. Soon after the club paired the two as roommates, Degifico recalled.

Degifico recalled one game at Winter Haven where Degifico went from goat to hero. 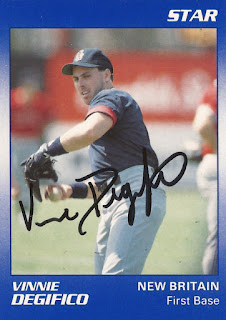 The first baseman committed an early throwing error, going for a double play with the go-ahead run on first. The next inning, Degifico recalled, Bagwell hit a double in front of Degifico and Degifico made up for his earlier mistake by hitting a home run.

"I remember seeing him at the plate looking at me and he goes 'Wow, you got out of that one,'" Degifico recalled of Bagwell. "That always stood out in my mind."

The two moved up to AA New Britain for 1990 and they stayed roommates, Degifico recalled. He also recalled the two liked to have a good time.

He recalled they went out one night late and got into the clubhouse late the next day. The manager, he recalled, knew they'd been out. "You better get four hits between you," Degifico recalled the manager telling them.

"I turned around, looked at him and said, 'It's going to be easy for me because Bagwell will get three today,'" Degifico said.

"Coming up through," Degifico said at another point, "I was very fortunate to always play with good players. It was really fun. It wasn't a job."

Back in Winter Haven in 1989, Degifico moved to single-A Lynchburg for the Carolina League stretch run to the playoffs. Degifico hit .279 over that season at Winter Haven. In his seven regular season games at Lynchburg, he went 15 for 27, for a .556 average.

Upon arrival, Degifico recalled his new manager, Gary Allenson, pointing out that the league didn't know Degifico, that Degifico should hit well. He did.
Except, Degifico recalled, that changed in the playoffs. Fellow Mainer Stump Merrill managed rival Prince William. He also knew Degifico. "Stump didn't give me too much to hit during that series," Degifico said.

Degifico came back for the 1991 season, but before that spring started, the end began.

Coming from a basketball family, Degifico still sometimes played that game. Days before spring training that year, Degifico took part in a rec-league game, "which was stupid," Degifico recalled.

He played and he dislocated his right ankle, suffering nerve damage in the process.

"I had to call it in," Degifico recalled. "They weren't happy."

Doctors feared he'd be out for the year. Through rehab, therapy and anti-inflammatories, though, he got back on the field. He got into 86 games between Winter Haven and New Britain. He hit .236.

"It was tough," Degifico recalled of that season trying to comeback from his ankle injury. "It played games with me mentally because I knew where I was. I knew the level I could hit at."

The comeback ended after that season. His ankle hurt too much. He could hardly get out of bed. The team still offered him a slot, he recalled, but he was done.
"After a month and a half," Degifico said. "I just moved forward - and I stayed in baseball."

He started as an instructor at an indoor baseball facility he and a some other former players ran. He also soon signed with his old school, Southern Maine as an assistant coach. He also works as an administrator there taking care of the financials.

"At one point it ends for everybody," Degifico said. "Whether it's your last collegiate game, your last professional game and I just cut my losses and moved on. And now I've got a son that's coming here next year. I've got daughter that's a big time travel basketball player."

Degifico and his wife Cindy have been married 27 years. Their son is Anthony, daughter is Maria.
He still keeps in touch with some of his former teammates.

Last he knew, his 1990 New Britain Red Sox team was still remembered in a Red Sox clubhouse in Florida. He recalled taking the son of Southern Maine head coach Ed Flaherty, Ryan Flaherty, to the clubhouse when Ryan Flaherty was younger.

"But there it was, sitting on the wall," Digifico said, "which is pretty unique. With all the big leaguers that I played with on that team, it's kind of an honor. Actually, they sent me one. I have one at my house."

Be sure to read Part 1: Vinnie Degifico, Great Memories
Posted by Steve78 at 12:50 PM