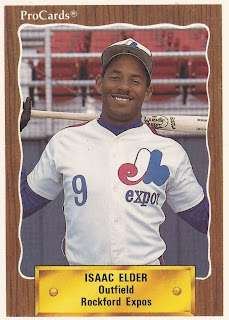 Chuck Elder's Cal State Los Angeles team wanted some insurance and Elder gave it to them.

Elder's team having already come back to take the lead in the top of the ninth, Elder smacked an RBI double to give his team an extra run and help lock down this April 1987 win, according to The Los Angeles Times.

Elder went on to turn pro the next year, getting 27 RBI there. Those RBI, though, were spread out over three seasons, Elder's only seasons as a pro.

Elder's professional career began in 1988, taken by the Expos in the 12th round of the draft, out of Cal State Los Angeles. Elder is also known by his given name, Isaac Elder.

With Cal State Los Angeles in 1988, Elder helped power his club to a 12-7 win, hitting a three-run home run, according to The Times.

With the Expos, Elder started in the rookie Gulf Coast League. In 52 games, he hit just .152. But, when he did get on base, he was fast. He stole 34 bases. He popped out in one June game.