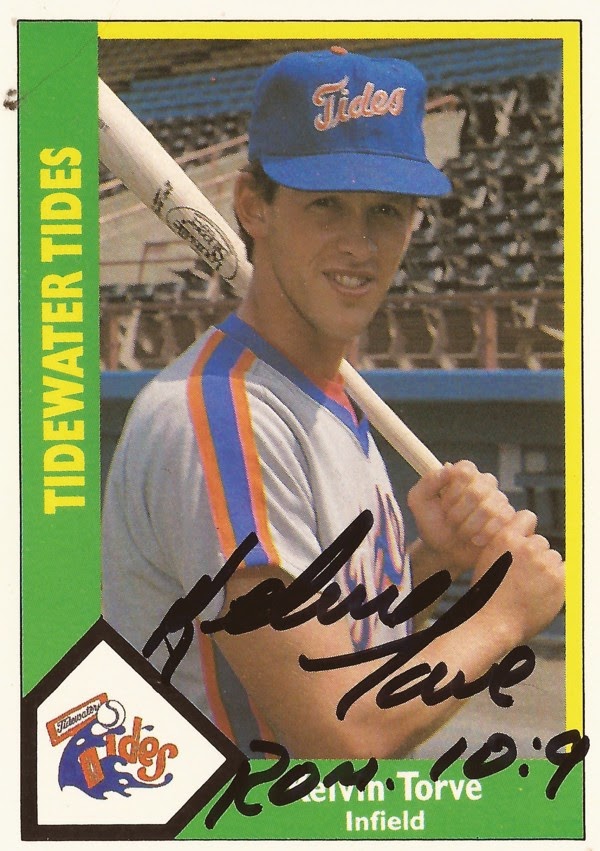 Kelvin Torve always took the first pitch of the game. It gave him a chance to see a pitch, the pitcher's arm angle and, he hoped, a chance to use that knowledge to get a hit later in the bat.

In this June 1988 game against future Hall of Famer Dennis Eckersley, Torve did the same. It was Torve's major league debut.

"In retrospect, I should have swung at it," Torve recalled recently to The Greatest 21 Days, "because I got a pitch to hit."

He didn't get much to hit after that and he ultimately struck out. But at least Torve was in the majors. It was a spot he admitted he thought he might never get to.

Torve made that debut in his eighth season as a pro, with his third organization. He'd made AAA in his third season in 1983, but he couldn't break through to the bigs for five more years.

"It's just a matter of being mentally tough," Torve said of waiting for his call, "just working herd, just going out there every day and giving it your best. You have a bad year, you have a bad year. You can either hand your head and quit or you can work harder and get better. And I'd like to think that I worked harder and got better."

He also eventually got to the majors in parts of three seasons and to Japan in two.
Torve spoke with The Greatest 21 Days by phone recently from North Carolina, where he now works as a development director at a classical Christian school. He is also the father of two and husband of nearly 30 years to his wife Tonya.

Torve covered his start as a youth in Rapid City, S.D., where he played American Legion ball, to Oklahoma and Oral Roberts University, where he played his college ball. From there came his selection by the Giants in the second round and his trek through the minors to, finally, the majors.

Baseball became his choice, though, because baseball figured to give him his best chance of playing professionally.

He also had the opportunity to play for the local American Legion team, Rapid City Post 22, one of the best legion programs in the country. He helped the team to the 1977 American Legion World Series in New Hampshire, the legion's first run to the series. "It was a huge deal," Torve said.
"It was just an absolute blast," Torve said of the experience.

His team went out in three games, but the college scouts got to get their look. Torve only heard from one scout there.

He ended up landing for college at Oral Roberts. He recalled paying his way down to take a look and liking it and they liked him, too.

At Oral Roberts, Torve and his teammates got the chance to play in front of multiple scouts each game. He remembered one game against Arkansas, which had multiple future major leaguers, drew a good 50 scouts.

By the time 1981 came around, Torve was a junior. He was also getting more attention his way from the scouts. A few teams called, asking what it would take for Torve to sign, rather than return for his senior year.
"I kind of figured I'd be drafted, I just didn't know where or whom," Torve said.


When draft day came, it was the Giants who came calling. And they called in the second round. A couple days later, Torve was signed.

Torve's first assignment was single-A Clinton. In 57 games, he hit .261. Torve was dissatisfied with his performance.

Torve recalled having trouble with the switch to wood bats from aluminum bats, as well as the move to playing every day.

"You just kept persevering," Torve said of his early difficulties, "you showed up every day, did your job, and you just did the best you can and trust God for the results."

But the Giants didn't seem to be dissatisfied. He went to instructional ball that fall. The next year, the second-rounder was sent to AA Shreveport.

At Shreveport, he did a little better. He hit .305 over the season, with 15 home runs. The next year he was assigned to AAA Phoenix, and Torve thought he was on his way to San Francisco.

Instead, he went out and hit .260 and hit just four home runs. He didn't get called up.


"I knew that was my one chance," Torve said. "I knew after that year, if I was going to play in the big leagues, it was going to be a long, hard road to get there."
Torve moved from AAA Phoenix in 1983 back to Shreveport for 1984. For 1985, he was traded to the Orioles. He played that year at AA Charlotte and the next two at AAA Rochester. He didn't see Baltimore. For 1988, he signed as a free agent with the Twins.

Throughout his organizational changes, Torve knew the game was the same. Just the people and the towns were different. He just continued to work to make it to the majors.

"If you're good enough and you deserve to make it to the big leagues, you do," Torve said. "If you're not good enough, you don't make it. It was just a change of scenery is all. Everything else was the same."

Also the same: Torve wasn't getting called up to the bigs. He was beginning to wonder if it would ever come.

"Going into the 5th, 6th, 7th, 8th year, I doubted whether I was going to make it at all," Torve said. "I just enjoyed playing and figured as long as I've got a uniform, I've still got a chance.

Then, in June 1988, as Torve and his AAA Portland Beavers finished up a double header, Torve's chance came.