Features on each member of the 1990 Hagerstown Suns, AA affiliate of the Baltimore Orioles. Players are as included in that year's team set. Click on the player's name to learn more.

Interviews (2)
1 - Pat Austin, Learned Much
Pat Austin was quick coming out of college. As a pro, he learned stealing bases wasn't just speed.
2 - Steve Culkar, Focused On
Steve Culkar didn't watch the scouts, but a college scout was watching him. 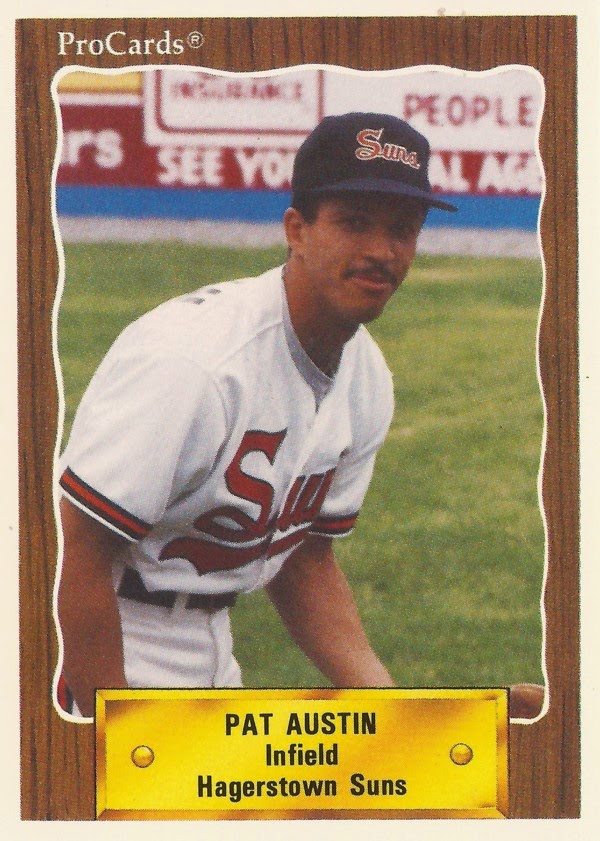 1 - Pat Austin, Defensive Label
Pat Austin made up for his arm strength with his quickness. But it wasn't enough to make the bigs.
2 - Dave Bettendorf, Award Winner
Dave Bettendorf had a good year at Kent State. He then took that to the pros, but he never could take that to the majors.
3 - Mike Borgatti, One Pitch
Mike Borgatti took it one pitch at a time to a good 1989. Played in five pro seasons, never making the bigs.
4 - Tom Brown, Right Approach
Tom Brown played big roles as a coach for Ben McDonald, Johnny Cueto and others. He is a AA coach for 2013.
5 - Don Buford, Off Running
Don Buford's career ended after four seasons, he then took off running in a different direction - to med school.
6 - Stacey Burdick, Got Outs
Stacey Burdick got his team to the National Baseball Congress and he got himself to pros. He couldn't get himself to the bigs.
7 - Mike Cavers, Pitched Great
Mike Cavers pitched well enough in college to earn a pro career. It lasted four seasons. He never made the bigs.
8 - Steve Culkar, Back Pocket
Steve Culkar turned pro, but he made sure he had his degree in his back pocket. He made AAA, but he never made the majors.
9 - Francisco de la Rosa, Not As Intended
Francisco de la Rosa got just two major league outings, giving up two earned in four innings. He passed away in 2011. 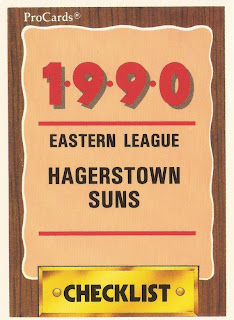 10 - Joe Durham, Does Good
Joe Durham played in Negro Leagues, and later in the majors. He also became a coach in the minors.
11 - Mike Eberle, That Stroke
Mike Eberle hit well in summer collegiate ball. He played five seasons as a pro, never made the majors.
12 - Craig Faulkner, Ran Out
Craig Faulkner never made the bigs, but he later returned home to coach Venice High School in Florida. He won second-straight title in 2013.
13 - Walt Harris, Extraordinary Catch
Walt Harris played pro baseball and in the NFL. He never made the majors.
14 - Paris Hayden, Baseball Gods
Baseball gods smiled on Paris Haden enough for five-season pro career. He never made the bigs. He later coached in American Legion ball.
15 - Victor Hithe, High Hopes
Vic Hithe believed in high school he'd be playing at Dodger Stadium. He played as pro for seven years, never making the majors.
16 - Bobby Latmore, Sports Career
Bobby Latmore continues long career in sports in 2013 with a sports promotion company. He played six seasons as pro, never making the bigs.
17 - Mike Linskey, Really Exciting
Mike Linskey was excited about being added to the Orioles 40-man roster. He never made an active major league roster.
18 - Rodney Lofton, Bunt the Ball
Rodney Lofton had the ability to run the bases and play defense. He never got to use either ability in the majors.
19 - Rick Lundblade, Rare Opportunity
Rick Lundblade quit baseball after first season. He then returned to the game, making AAA, but not the majors.
20 - Ben McDonald, High Expectations
Ben McDonald had high expectations put on him that he could never fulfill. He still played in nine major league seasons.
21 - Joel McKeon, Working Forkball
When Joel McKeon's forkball worked, he showed exactly what he could do. He played in two major league seasons with the White Sox.
22 - Scott Meadows, Got Comfortable: Scott Meadows proved he could play at AAA, but he never got the chance to prove he could play in the majors.
23 - Luis Mercedes Tough Situation
Luis Mercedes came back from spring cut to make the bigs in two more seasons. He made the Orioles over 3 years in all.
24 - Jose Mesa, His Job
Jose Mesa knew as a closer he had to give it everything he had. In the 1997 World Series, he couldn't get it done.
25 - Dave Miller, Sinker Guy
Dave Miller was a sinker/slider guy. He played seven seasons, never made bigs. He later became bullpen coach for the Indians.
26 - Chris Myers, Same Thing
Chris Myers didn't want his age to hold him back. He played seven seasons, never made bigs.
27 - Jerry Narron, Stayed Connected
Jerry Narron loved baseball and has been a part of it in the majors as both player and manager.
28 - Ty Nichols, Added Up
As a scout, Ty Nichols tried to give all kids a chance. He played six seasons as pro, never making the bigs.
29 - Oswaldo Peraza, First Win
Oswaldo Peraza got his first major league win in an Orioles season full of losses.
30 - Doug Robbins, Great Thrill
Doug Robbins thought trying out for the Olympics was a thrill. He then made team and won gold. He never made the bigs.
31 - Mike Sander, Toughest Part
Mike Sander won wherever he went. It was enough to turn pro. But he had troubles continuing that, never making the bigs.
32 - Dan Simonds, Right Place
Dan Simonds played five seasons as a pro, then went on to coach in college. He is head coach for 2013 with Miami of Ohio.
33 - Sunny, Bedecked In
Sunny, the Hagerstown Suns' mascot, made the switch to Blue Jays blue, after Orioles orange.
34 - Anthony Telford, All About
Anthony Telford gained praise from his Hall of Fame manager
35 - Paul Thorpe, High Pressure
Paul Thorpe was the go-to guy at single-A Daytona in 1985. He played seven seasons as pro, never made the majors.
36 - Jack Voigt, Every Opportunity
Jack Voigt showed he could play at the major league level. He played at that level in seven seasons.
Posted by Steve78 at 9:00 PM