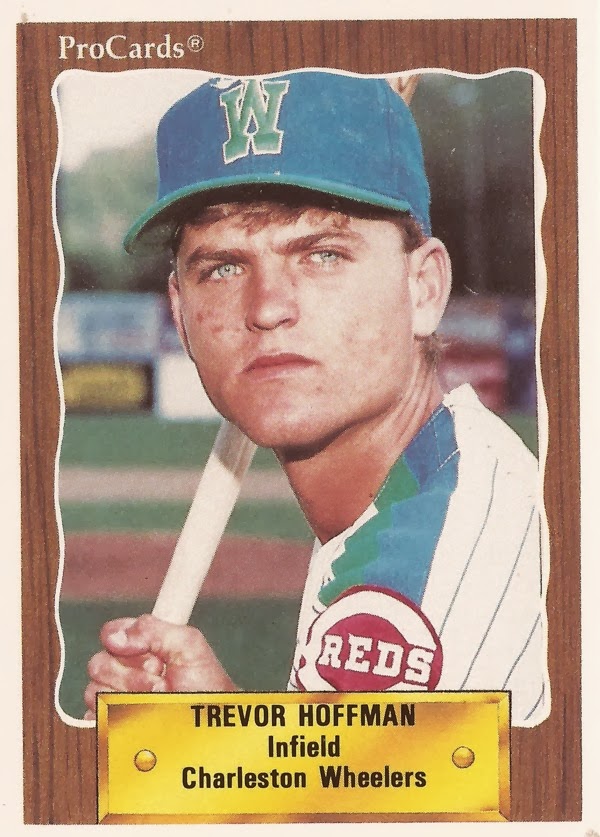 The rookie Marlins reliever worked to protect Florida's lead. He just had to get past Giants slugger Barry Bonds to do it.

And the young hurler did it. Two fastballs and a curve and Bonds could only check his swing on the third pitch, weakly grounding out to first.

"He's going to be a great closer some day," fellow Marlin Jeff Conine told The Boca Raton News afterward of his pitching teammate, "because he's got that mentality."

The young Marlins reliever Conine was talking about was pitching in just his fourth major league game. He would go on to be much more than a great closer. He went on to be one of the top closers the game had ever seen.

The pitcher Conine was talking about was Trevor Hoffman.

By the time Hoffman was done, he'd saved 601 major league games, saving 30 or more in a season 14 times. He was a seven-time All-Star and finished second in the Cy Young balloting twice.

Many of those saves came with the tolling of "Hell's Bells."

But the greatness that would come for Hoffman wasn't always evident. Hoffman once was shortstop who couldn't hit, but had a great arm.

Hoffman started as an infielder, taken by the Reds in the 11th round of the draft out of the University of Arizona. Hoffman is the brother of major leaguer Glenn Hoffman.

With the Reds, Hoffman played his first season as a shortstop at rookie Billings. He hit .249 in 61 games. He then moved to single-A Charleston, hitting even worse. He hit .212 in 103 games.

It was during that season that Hoffman was transformed from an infielder to a pitcher. His coaches thought he threw well, so they tried him out on the mound, his manager at Charleston Jim Lett told MLB.com years later.

Lett recalled to MLB.com being struck by Hoffman's instant control.

"All of a sudden, he's 60 feet, six inches away, and he's banging strikes," Lett told the site in January 2009. "It wasn't like he was throwing balls all over the place and we had to chase them down. He was in the strike zone from Day 1, so it was like, 'OK, we need to keep this going for a while and see what we can get.'"

Hoffman didn't get his first in-game action until the next year at single-A Cedar Rapids - and AA Chattanooga. In 41 outings between the two, Hoffman posted an ERA of 1.89 and saved 20 games.

He made AAA Nashville in 1992, but stumbled a bit with a 4.27 ERA in 42 outings. The Reds then left him unprotected in the November expansion draft. The Marlins took him with the eighth pick.

With the Marlins, Hoffman made Florida right away. In 28 outings, he had an ERA of 3.28 and two saves. But he didn't stay in Miami for long. Hoffman landed in his permanent home of San Diego in June in the Gary Sheffield trade.

He made his first All-Star team in 1998. The same year, he came in second in the Cy Young. He did it by saving 53 games, leading the league. He also did it by picking up a save in 41-straight opportunities. The streak ended on a Moises Alou home run.

"It's been fun along the way," Hoffman told The Associated Press when the streak ended in July, "and now it's time to start a new (streak)."

Hoffman helped the Padres to the World Series that year, but suffered another rare blown save in Game 3.

Going into the 2002 season, Hoffman had 314 under his belt. He told The AP is success came with a lot of preparation. That included running, watching batting practice and going over scouting reports.

"I don't feel like there's any rock left unturned by the time I get to 10 o'clock at night when it's my turn to do my thing," Hoffman told The AP. "I feel I have exhausted all avenues to prepare that particular day."

Hoffman left San Diego in 2009 for the Brewers. He saved his final 47 games there, enough to give him 601 for his career.