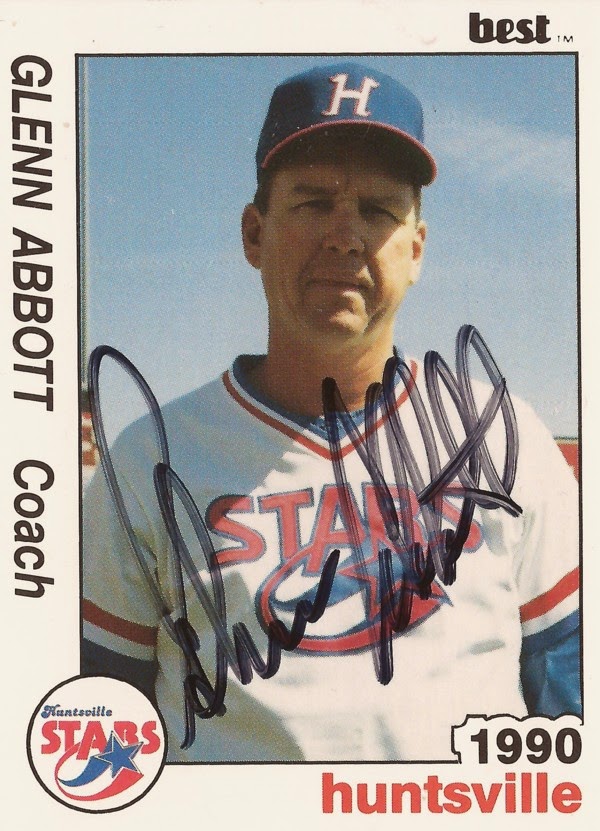 BINGHAMTON, NY - Glenn Abbott had pitched on teams that won the World Series. He picked up double-digit wins in a season twice.

But, for three weeks in 1982, the major league hurler could hardly get out of bed.

While recovering from a relatively minor procedure to remove bone chips from his elbow, Abbott came down with spinal meningitis. Just sitting up for 15 minutes was a difficult task, he recalled.

"It's just one of those things," Abbott recalled to The Greatest 21 Days recently. "It's something you have to deal with. That's the thing about this game. There's a lot of hard times. You've just got to deal with it.

"That's what a lot of guys don't understand. They want to feel sorry for themselves and this and that. You can't do that. You've got to keep your head up and you've got to hit it head on because it's a game of failure."

Abbott admitted that time was tough on him mentally, but he got through it. He also got back to the field.
In his first start back, after missing a year and a half of major league time, the Seattle Mariner threw a complete game, giving up just five hits and a single run for the win.

"That was very gratifying," Abbott said. "It really made you feel good when you went through so much and had a really good game like that."

Abbott spoke to The Greatest 21 Days recently at Binghamton's NYSEG Stadium, where he is serving for 2014 as pitching coach of the AA Mets.

Abbott covered his start in the game in his native Arkansas, ultimately choosing baseball over basketball. He then turned pro and made a steady climb to the majors.

Once in the majors, Abbott became a steady presence for the Athletics, both as a starter and a reliever. He then became one of the original Mariners, taken in the expansion draft.

By the time he was done, and after his health scare, Abbott had played in 11 major league seasons for three teams, with a career ERA of 4.39. He then started his new career as a coach, a career he continues in 2014 - 45 years after his career in baseball began.
Abbott, now 63, started playing organized baseball at the age of 8. He recalled always pitching well through high school. He also shot well, in basketball.

In high school in Little Rock, the scouts started paying attention. Colleges did, too.

The University of Arkansas offered him a scholarship, but it was in basketball. He also wouldn't be able to play baseball. Arkansas State would let him play both sports.

"I knew that if I had any future, it would be in baseball," Abbott said, "but basketball was going to help pay my way."

As it turned out, baseball paid his way. The scouts made it known they were looking at him, asking him questions, including whether he would like to play pro baseball. Abbott did.

He signed out of high school, taken by the Athletics in the 8th round of the draft. He then attended Central Arkansas in the off season.

"It was very exciting being drafted," Abbott said.

As a pro, Abbott made a steady ascent to the majors. He went from short-season to single-A, AA and AAA by 1972. In 1973, he made his major league debut.

In July, Oakland's Catfish Hunter went down after taking a ball off a finger, Abbott recalled. Abbott was the one called up to fill in.

In his first major league start, July 29, Abbott only lasted into the fourth inning. He gave up two earned on four hits.

"Just a very exciting time," Abbott recalled of his debut. "I was anxious, very anxious, because it's a dream. It's something you wanted to do your whole life and now you're finally getting the opportunity to go do it.

"You end up getting scared," Abbott recalled. "It's kind of intimidating."

Abbott's next major league appearances didn't come until September. In his second major league start, Abbott threw a complete game, five-hitter in a 3-1 win. It was the first of 37 complete games he threw in his career.

Abbott went on to play with the Athletics for four seasons. He only got one appearance in the playoffs for Oakland, but he did make an appearance in what became a no-hitter.