Interview Part 1: Dennis Burtt, Got There 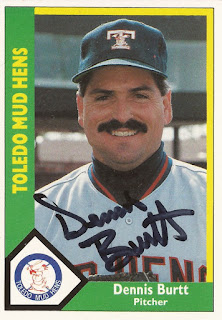 The thing Dennis Burtt remembers most about his major league debut was his seeming fight to stand still.

It was a debut that came at the close of his 10th professional season, so nerves were to be expected. Burtt's nerves, it seemed to him, were on display for everyone to see.

"The thing I remember about that game is when I got into the stretch and I came set," Burtt recalled to The Greatest 21 Days recently, "I thought I was going to get called for for a balk.

"When I look, I see that I was perfectly still like I should have been," Burtt said, "but in my mind, the foot against the rubber was just moving a mile a minute."

Burtt went on to get into five games that September and three more the next April. In a career that spanned 15 seasons, those eight outings turned out to be his only outings in the majors.

He made that major league debut after starting his career in 1976. Along the way, Burtt recalled, there were early injuries that seemed to hold him back and late decisions that seemed to prevent a return to the majors.

Overall, though, he knows where he got for those eight outings, and that was the majors.

"Things could have been completely different in a good way or they could have been different in a bad way," Burtt said. "You don't dwell on it. You just enjoy the time you had. Yeah, it took me 10 years, but I did get there. Maybe not for as long a period of time as I would have liked  to have been there, but you know, I did get there."
Burtt spoke to The Greatest 21 Days by phone recently from home in California. He covered his time in baseball from its start as a kid growing up in Orange County to the pros and his long trek to the majors.

Burtt spent his earliest years in Anaheim, soon moving with his family the city of Orange. His earliest connections to the came came in Anaheim. He has a picture of himself there in uniform  with a bat serving as bat boy for an older team of kids.

As Burtt got older, he started to play himself. He got involved in Little League and started to move up the ladder. His father coached all his teams.

He also played out front in the street with the neighbor kids. Home plate would be the sewer the bases were painted on the asphalt. He also played over-the-line on Saturdays at the school. "We just loved playing," Burtt said.

He seemed to play well as he went, but Burtt wasn't so sure he was that much better than other players. He had God-given talent and he used it.

As far as playing as a pro, though, it wasn't something he constantly thought of. Burtt likened it to kids today that tell him of their plans to go pro. Burtt serves as a high school coach in the Stockton area. But he never really talked about it.

Once in high school, Burtt made the varsity team as a sophomore. He also played multiple positions. He pitched and he also played shortstop and catcher. In his senior year, he caught most of the year and pitched a little. He was actually catcher out of necessity. He was the only catcher on the team.

His college destination was Santa Ana Community College. His coach there Jim Reach made him a full-time pitcher. Reach believed if Burtt would go anywhere, it'd be a pitcher.
Burtt took his knowledge of other positions and worked them into his pitching, mainly his fielding. Burtt said being a good fielder is part of being a good all-around pitcher.

"I felt I was a very good fielding pitcher," Burtt said. "I think playing shortstop and blocking balls and playing a little outfield here and there helped me become a good fielder."

Burtt wasn't aware of any scouts watching him in high school, at least none talked to him directly. The first time he ever talked to a scout was the night before the January 1976. It was a scout for the Angels.

Burtt recalled different people telling him he might be good enough to turn pro, but he hadn't really heard anything definitive.

"Until I actually talked to that Angel scout, I didn't know if I was good enough or not," Burtt said.

The scout told him the club was looking to get both Burtt and a teammate of his at Santa Ana. As it turned out, Burtt was taken in that January draft, just not by the Angels. He was taken by the Red Sox in the second round.

The way Burtt found out about his selection: He read it in the paper.


Drafted, Burtt continued with Santa Ana until the end of that season. That allowed him to continue playing in meaningful games into May. He then signed and he was off to the pros.

Burtt's first destination was short-season Elmira and the New York-Penn League. His career started off well. Burtt recalled going 21 full innings into his professional career before finally giving up an earned run.
"It was nice," Burtt said of his career-starting scoreless streak. "I didn't think about it until I gave up the run. Then I read it somewhere and I was like 'OK, that's good.'"

That first run, he recalled, came on a play at the plate. Burtt watched from behind the plate, as he backed up home. When the relay throw came in, the ball was just to the first base side of home.  The tag came to the center of the plate, leaving the runner room to score.

Over Burtt's first eight outings, five of them starts, Burtt went 5-0 and had a 1.23 ERA. But then his early injuries came. About halfway through that first season Burtt's deltoid muscle got stretched. He didn't get to pitch the second half of the year.

He went to a doctor in Elmira and was told to rest. So he did. He did little the next spring and made the single-A team in Winter Haven. The deltoid injury came back.

"I was pitching in Lakeland and I remember I had runners at first and third in the seventh inning," Burtt said. "I went to throw a slider and it came out like a curveball and boy, I just couldn't lift up my arm again."

He soon saw another doctor. This time he was given options. He could have surgery or he could try and strengthen his shoulder through weights. He chose the weights.

He returned to the field in August and he stayed away from anything breaking. He also relied on his catcher.

Burtt returned to Winter Haven for two more seasons. He then started his slow rise to the majors. (Part 2)