Features on each member of the 1990 Geneva Cubs, short-season affiliate of the Chicago Cubs. Players are as included in that year's team set.

Interview (1)
1 - Tim Delgado, A Bit Stubborn
Tim Delgado spent decade as a pro, extended his career in Asia and winter ball. Took career in own hands. 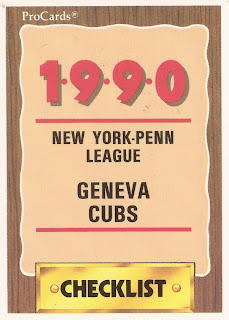 1 - Luis Benitez, Heard Little
Luis Benitez was another player in the Palmeiro-Moyer deal. Few ever heard of Benitez.
2 - Troy Bradford, Fast Start
Troy Bradford went on a roll from college to the pros. He couldn't keep the fast start going. He never made the bigs.
3 - Victor Cancel, Walk Worked
Victor Cancel worked a walk in a 1991 contest. It was one of his last. He played four seasons, but he never made the bigs.
4 - Stephen Coffey, Rewarding Work
Stephen Coffey played two seasons as a pro, later turned to 'rewarding work' of coaching youth.
5 - Amilcar Correa, Couldn't Stop
Amilcar Correa pitched in four pro seasons, he never made it higher than high-A.
6 - Phil Dauphin, Plugged Away
Phil Dauphin's goal was the bigs, but he knew he needed to work to get there. In seven seasons, he never made it.
7 - Tim Delgado, Good Ballgame
Tim Delgado pitched a good ballgame at AA. He played in four pro seasons, but never in the bigs.
8 - John DeRicco, Time Off
John DeRicco got much time off in his last year of college. He still got drafted by the Cubs, but played a single season.
9 - German Diaz, Position Switch
German Diaz switched positions, hoping he could get further as a pitcher. It didn't work. He never made the bigs.
10 - Lance Dickson, Called Up
Former Cubs top pick Lance Dickson didn't expect a call up to be handed to him. He got it, then didn't get another.
11 - Brad Erdman, Kept Playing
If Brad Erdman didn't have his dream, he told a paper, he wouldn't have played so long. He never played in the bigs
12 - Charlie Fiacco, Good Shape
Charlie Fiacco felt he was ready to go pro after his return from a college injury. He played just a single season.
13 - Andy Hartung, Far Enough
Andy Hartung made it to AA, knew he wasn't far away. He ended up being far enough. He never made the bigs.
14 - Bill Hayes, Frustrating Part
Bill Hayes has been around long enough to know what's frustrating. He's now with the Giants as a bullpen catcher.
15 - Jessie Hollins, Gentle Giant
Jessie Hollins was among the hottest pitchers until an injury. He played just four major league games. He died in a 2009 fishing accident.
16 - Joe Housey, Good Command
Joe Housey went from being a player to a coach and later to being a scout.
17 - Brad Huff, Fourth Round
Brad Huff was good enough for a fourth-round selection. He couldn't turn that into a long career. He never made the bigs.
18 - Greg Kessler, Good Innings
Greg Kessler took extra time in college after his draft selection. The extra time didn't translate to a long pro career.
19 - Ricardo Medina, Right Pitch
Ricardo Medina played in six seasons as a pro, but never in the bigs. He later helped others make the bigs as a minor league coach.
20 - Tim Parker, That Chance
Tim Parker's selection by the Cubs was a dream come true. He couldn't turn that dream into long pro career. He never made the bigs.
21 - Bill Paynter, Head Start
Bill Paynter tried to get a head start on the 1990 season. It didn't seem to work. That season was his last.
22 - Joe Porcelli, Bad Start
The Cubs saw enough of Joe Porcelli to take him in 15th round. He couldn't turn that into a long career.
23 - Gabby Rodriguez, Exhibition Game
Gabby Rodriguez got exhibition win at AAA, never made regular game there.
24 - Roberto Smalls, His Message
Roberto Smalls went from being a high Cubs draft pick to serving life in prison for a 1994 murder.
25 - Karl Stanley, Pitched Well
He pitched well in college,  played four pro seasons.
26 - Paul Torres, Play Wherever
Paul Torres just wanted the right glove and he'd play wherever. He never played in the bigs.
27 - Clinton White, Multi-Sport
Clinton White was a multi-sport star in high school. He chose baseball. He's now working with young athletes.
28 - Mike Young, Strike Out
Mike Young couldn't match his college strikeout totals. He lasted just two seasons as a pro, and never made the bigs.
Posted by Steve78 at 9:00 PM