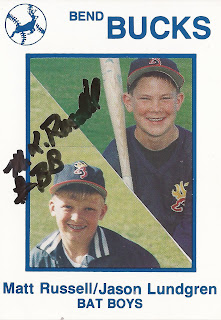 Matt Russell recalled the pay - it wasn't that much.

But he also recalled the experience, something worth a lot more.

For three summers, starting at the age of 12, Russell served as batboy for the short-season Northwest League Bend Bucks.

And he worked hard. He not only retrieved bats, but he shagged balls, swept dugouts and even ran errands for players, he recalled.

"It was five bucks a game," Russell recalled to The Greatest 21 Days in an interview, "but I got to be out there with my heroes at the time."

They were also older young men who were able to go out and play baseball professionally, Russell said, something he aspired to do.

"My career never took off like theirs did," Russell added, "but I tell you what, I was amongst giants at the age of 12."

Russell spoke to The Greatest 21 Days as he achieved a rarity as a minor league batboy. He and fellow batboy Jason Lundgren were granted their own joint card in the team's 1990 set, along side those very same players they looked up to and ran errands for.

Russell offered his recollections from his time chasing bats at Bend's Vince Genna Stadium. He also touched on his life since. His life since took off in a very different direction from baseball as he spent time in the Navy.

Born and raised in Bend, Russell's path to becoming a Bend Bucks turned out to be a relatively simple one. It involved his father and where he lived.

Russell and his father often played catch in the front yard, three or four days a week weather permitting and their neighbors across the street couldn't help but notice, Russell recalled.

Their neighbors across the street happened to be the owners of the Bucks, Jack and Mary Cain.

"I got to know Jack and Mary pretty well and he asked me to see if I had any interest in being a batboy," Russell said.

Russell took to the job.

During batting practice, Russell and fellow batboy Jason Lundgren would be out in the alleyway between the left field wall and the Albertson's supermarket grabbing balls.

After that, they'd go to the clubhouse and essentially take orders from players and head to the Albertson's.

Players would ask for fruit plates, salads, chicken and Jojos (a Northwest potato side). They'd take the players' money and head to the nearby store to fill them and the players would tip for the service.

"I don't know exactly what they were making as single-A ball players - it certainly wasn't much - but they made us feel like part of the team," Russell said.

During the games, Russell and Lundgren would batboy for the Bucks and the visiting team. They'd alternate home games to determine who got to get the Bucks' bats.

Then, after the game, they swept the dugouts.

"I was so in the moment there and in awe," Russell said.

As batboys, they didn't usually travel, Russell said. But they did travel with the team once, to Spokane.

And there were reasons it was just once - they got into some trouble.

"Jason and I stayed up late with the players and the players got in trouble for keeping us up late," Russell recalled. "We weren't doing anything wrong, just playing video games and maybe jumping off the second floor into a pool. But other than that - typical kids stuff."

Russell recalled some high jinks back in Bend, too. One time, with the help of a couple other players and the team laundry guy, he put Icy Hot in his fellow batboy Lundgren's pants. "He had to go home in the third inning," Russell recalled.

The thing that he remembers the most, though, is going fishing.

One of the players, a catcher from Oklahoma, offered the first time Russell had heard the term "beads" used for instead of money. "Such a good guy," Russell said of the player. Russell couldn't recall, but the description matches Steve Avent.

"We spent the day up there fishing and swimming, had a great old time," Russell recalled, "and it was something new for the Oklahoma boy who'd never caught a trout before. He'd always been bass fishing."

Another story had to do with those errands to Albertson's and team owner that hired him, Jack Cain. Bob Blankenship, a reliever on the 1990 team, sent Russell to the store for some food with a $20 bill. But, somewhere on the way to the store, Russell lost the money.

Blankenship handled it well, but Russell was still upset.

In tears, he went in to talk to Cain.

After his batboy days were done, Russell went out for baseball his junior year in high school, but didn't play in school after that.

He then tried Western Oregon University for a year. When that didn't work out, he returned home and eventually joined the Navy..

"I loved the Navy," Russell said. "It made me the person I am today."

Russell served as an aviation electronics technician. He worked on a variety of subsystems on a reconnaissance aircraft. He spent time on the USS Independence, based out of Japan. He also spent time in Spain and Crete.

He then got into telecom, where he's worked in a sales position covering the west coast.

And he started out as a Bend Bucks batboy.

"No matter what happens in my life, nobody can ever take those memories, those times, that innocence away from me ever in my lifetime," Russell said.

"It was my first job. Making five bucks a game. That was peanuts, it really was back then, for the amount of hours and the days that I spent at the ballpark. But it was incredible and I wouldn't trade it for the world."