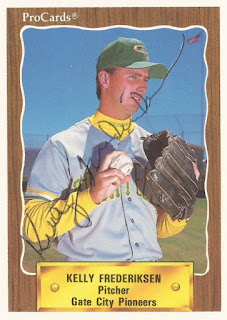 Kelly Frederiksen recalled his first pitch sailing to the wall.

This was summer 1989 and the Brigham Young hurler joined a team of other college students on a baseball diplomacy trip to Nicaragua.

"My first pitch was 90-plus mph straight to the backstop," Frederiksen recalled. "It went over everybody's heads. That was quite an experience, I'll tell you that."

Then there were the surroundings themselves. In a tournament that included teams from Mexico, Dominican Republic, Cuba and elsewhere, Frederiksen recalled filled stadiums and boisterous crowds.

"You couldn't even hear the first baseman talking to you, it was so loud," Frederiksen said. "That was my first experience playing in a stadium of that magnitude with that many fans and it being that loud.

"To be honest, I think it took a little getting used to for me," he added, "but I loved the experience."

He also recalled that experience helping him prepare for the crowds he'd see the next year in the minors with the Expos - especially playing in front of his home-state fans late that next season in Salt Lake City.
Frederiksen spoke to The Greatest 21 Days recently by phone from his home in Idaho. He talked of growing up and learning the game in Utah, then walking on at BYU and signing his pro contract with Montreal.

His pro career ended up being brief, just one season, but he got there. He and his family have since settled in Idaho, the state in which he played his single season as a pro.

Frederiksen grew up in Bountiful, Utah, north of Salt Lake City. Frederiksen learned the game after his older brother took it up. His father, a competitive man who hadn't really played baseball as a kid, then took up the game with them, learning it and then coaching it.

"We had a great time doing it," Frederiksen recalled. "It was a great family activity for us."

It was a family activity in other ways, too. In winter, Frederiksen recalled his father making snowballs and the brothers would hit them outside in the cold with a broomstick.

Soon, Frederiksen's mother got involved, if only briefly. He recalled she stood in as Frederiksen practiced his pitching. It ended up being short-lived because Frederiksen got inadvertently wild, right after his mother told him not to.

Otherwise, Frederiksen pitched into a net, one that he still has. They also got a camcorder, put that on a tripod and analyzed their swings and pitching mechanics. The brothers seemed to get better each time.

That extra work, Frederiksen recalled, made the difference. "Because I outworked them, I surpassed them," he said.

Frederiksen recalled first thinking about the pros at age 9 or 10. He also remembered mentioning those thoughts and hearing laughs in return from the other kids.

"I didn't let that bother me or stop me," Frederiksen said of the doubters. "I just continued to pursue it and work hard."

Coming out of high school, Frederiksen won a full-ride scholarship to Utah Technical College, now Utah Valley. But Frederiksen turned that down. He wanted to go to Brigham Young.

Frederiksen played with several BYU players on a summer league team in Provo and he had success. "I walked on down there because I knew I could compete," Frederiksen said.
He played his first year at BYU between the varsity and junior varsity teams. He then served his church mission serving the people of Charlotte, N.C.

Frederiksen played two more seasons after he returned, working with BYU pitching coach Bobby Noel. "He taught me more about pitching than probably everybody I've ever learned from," Frederiksen said of Noel.

He then played the summer of 1989 in San Bernardino, Ca. One of Frederiksen's BYU teammate's dads put together the team. After coming up short a pitcher, he gave Frederiksen a call. The invitation put Frederiksen on his path to the pros.

Once there, Frederiksen recalled working on his mechanics with his coaches. That was also the summer Frederiksen traveled to Nicaragua.

In Southern California, Frederiksen spent time with Steve Alonzo, the coach at San Jacinto College. Alonzo invited Frederiksen to an exhibition against a junior national team from Australia. The best part: Jim Holden, a scout from the Expos would be there.

Frederiksen pitched well and Holden offered him a contract.

Frederiksen recalled his wife advised against signing. She wanted him to wait. Frederiksen, though, didn't get a lot of chances to pitch at BYU. He wasn't sure another opportunity like that would come.

"To be honest with you, it was kind of like a dream come true," Frederiksen said. "I felt like all the hard work I'd put into the game was finally starting to pay off." (Go to Part 2)