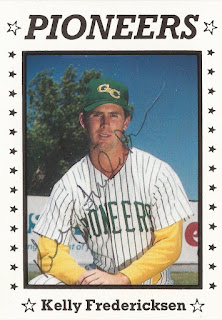 Kelly Frederiksen's first professional start for the Gate City Pioneers and the first game he served as a closer as going differently, he recalled recently to The Greatest 21 Days.

His first start, he recalled, "was kind of a disaster, to be honest with you." He gave up five runs in the first inning and couldn't get his off-speed pitches to work.

Later that season, as the team moved him to relief, Frederiksen recalled starting strong. He came in and struck out the side against rival Billings. He also picked up the first of his three saves that year.

"You learn a lot from those experiences," Frederiksen said of the bad outings. "Learning how to adjust to the adrenalin, because I probably had a lot more adrenaline going than I was used to. It was an adjustment."

"But the main thing for me was just being focused and focused on what I was there to do," Frederiksen said, "and putting everything else aside and everything else out of my mind. And the times that I did that, I was very successful."

Frederiksen went on to see time in a total of 20 games that season for the rookie-league Pioneers. He picked up one win to seven losses. He also picked up those three saves.

While a return for a second professional season never materialized, and Frederiksen didn't make it above rookie ball, he did make it to the pros. He spent the summer of 1990 getting paid to play baseball.

Frederiksen's pro career started the previous summer when he signed his contract with the Expos. The Montreal scout spotted him playing in an exhibition game in Southern California.

"I was really excited," Frederiksen recalled of starting his pro career. "I felt like it was a new chapter in my life. I was excited with the potential and everything that was ahead of me - meeting new people, meeting some very, very talented athletics and being a part of that. That was just a great experience."
Frederiksen reported to Expos spring training in 1990 and he went to extended spring. He recalled getting into some games and traveling and even seeing players on rehab assignments like David Justice.

Out of that spring, the Expos assigned the Utah-native Frederiksen to the team's co-op club in Pocatello, Idaho. The assignment allowed Frederiksen's family, including his wife Joan, to see him play.

"She was able to get to most of them," Frederiksen said of his wife. "She was at all the home games. And of course my parents would come up from Bountiful to watch. It was really a lot of fun."

Disastrous innings seemed to be a reoccurring cycle, he recalled.

"I had to get back to the drawing board," Frederiksen. "It seemed I'd have one disastrous inning and then have three or four outings where I wouldn't give up any runs, which is why I ended up with a 5.something ERA."

He also had his successes, including that first game as a closer. He pitched that night against Billings, a team he'd had trouble with earlier.

He also recalled coming into a game against his home-state Salt Lake City Trappers.  Frederiksen came on in relief and he shut them out for four innings and gave his team a chance to win it.

Then there were the pick-off moves, especially the first-to-third moves.
"Every time they called that play I really got excited about it," Frederiksen said, "because we were successful."

He recalled getting five tries at it and picking off four of them.

"We could have had the fifth guy," Frederiksen recalled, "but the third baseman was just a half a step slow or we'd have had that guy, too."

"That was fun for me," Frederiksen added. "I liked that challenge."


Frederiksen ended that year with 20 total outings and a 1-7 record. The undrafted free agent ended with a 5.43 ERA.

He returned for spring training 1991 and hoped for another shot. He recalled playing well. He focused on locating his pitches. He didn't want to walk anyone. He set that as one of his goals.

"I had gone in with that mentality," Frederiksen said. "I may have given up a few runs here and there but, to be honest with you, i was feeling very good about how well I was performing."

Despite that, Frederiksen got the call into the office April 1. The team handed him his release.

Frederiksen recalled that as a difficult time.

He went from signing his first pro contract nearly two years earlier, with all the hope and promise that came with it to getting his release.

"It was just the opposite end of the spectrum," Frederiksen recalled. "From the very highest to the very lowest."

He had some tryouts after that, but none worked out. His career ended after that single season.

His disappointment extended to other aspects of the game, he recalled. "It was really hard for me to even watch a baseball game for probably, I would say, at least a good eight years," Frederiksen said.

But he also had a growing family to tend to. His career ended as he and his wife expected their first child. They've since had five children. They have sons age 20 and 24, boy and girl twins, age 16. They also lost a child at four days old.

His wife Joan is a school teacher. They've been married for 27 years. Frederiksen now drives truck for UPS. The family lives in Idaho.

Frederiksen eventually did get back involved in baseball. He got back in through his children. When their oldest got baseball age, Frederiksen started coaching him. The father gradually got back in from there.

He's coached Little League and taught his kids the game. He's also worked at coaching other sports. His 16-year-old daughter has now taken up volleyball, so he's working to learn that game, too, so he can help her.

"I've got to say it's still sometimes difficult knowing I was that close," Frederiksen said. "But I have to look on the positive side of it and realize that I got an opportunity that a majority, probably 98 percent of the people that ever play the game of baseball never get that - maybe even less.

"So I have to look at it from that side of things," Frederiksen said, "and realize that I got that brief moment and be happy with it."