Features on each member of the 1990 Augusta Pirates, single-A affiliate of the Pittsburgh Pirates. Players are as included in that year's team set. 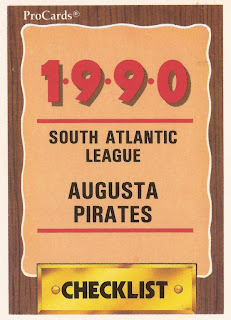 1 - Felix Antigua, With Consistency
Felix Antigua gave his single-A Pirates a good start in a 1990 contest. He played four seasons, never made the bigs.
2 - Scott Arvesen, Really Good
Scott Arveson pitched well for Augusta in a July 1990 game. He played four seasons as a pro, never made the bigs.
3 - Rich Aude, Being Consistent
Rich Aude worked to be consistent, then made the the Pirates. He played in three major league seasons.
4 - David Bird, Great Game
David Bird pitched well enough for Chapman College to get a pro career, but not a long one.
5 - Michael Brewington, Still There
Michael Brewington remains in his college's record book. His impact on the pros was more fleeting.
6 - Lee Driggers, More Satisfaction
Lee Driggers played in the minors, but he got so much more satisfaction out of coaching.
7 - Willie Greene, His Game
Willie Greene could have played basketball or football. Baseball, though, was his game.
8 - Bill Holmes, Major Prospect
Bill Holmes put on a hitting display in college. He couldn't put on one in the pros. He played just two seasons.
9 - Brent Honeywell, Increased Velocity
Brent Honeywell took what he learned in college to his job as a high school coach. He played three seasons as a pro.
10 - Deron Johnson, His Niche
Deron Johnson found his niche in scouting. He became head scout for the Twins. His playing career lasted three seasons.
11 - Austin Manahan, Struggled A Bit
The Pirates liked what they saw in Austin Manahan. He ended up playing eight seasons, but he never made the bigs.
12 - Ramon Martinez, Three Runs
Ramon Martinez went four pro seasons, served mostly as a reliever. He never made the majors.
13 - Wayne Masters, Championship City
Wayne Masters only got two seasons as a pro. He never got to see the big championship city of Pittsburgh.
14 - Jason Nixon, Few Marks
Jason Nixon made the Marshall University record books. He played a single season as a pro.
15 - Eric Parkinson, Up-and-Coming
Eric Parkinson had a incredible feeling pitching against AAA players in an exhibition. He never got into an actual AAA game.
16 - Will Pennyfeather, Major Asset
Will Pennyfeather played for nearly two decades. He made the bigs in three seasons with the Pirates.
17 - Darryl Ratliff, Was There
Darryl Ratliff ran down balls in 11 pro seasons. He never got the chance to do so in the majors.
18 - Roman Rodriguez, Bullpen Catcher
Roman Rodriguez never made the bigs as a player. He made it as a bullpen catcher. He's served with the Yankees for a decade.
19 - Kevin Rychel, Pitch Count
Kevin Rychel pitched well in 1990, even on a pitch count. He played eight seasons, but he never made the bigs.
20 - Delvy Santiago, Extremely Proud
Delvy Santiago as a scout saw potential in a prospect. That prospect made the bigs, Delvy didn't.
21 - Winston Seymour, Little Luck
Winston Seymour had little luck on one night in 1989 and had little luck with a long career. He never made AA.
22 - Jessie Torres, Home Run
Jessie Torres didn't hit a lot of home runs, but he hit one this night in August 1992. He never made the bigs.
23 - Ken Trusky, Hopefully Improve
Ken Trusky wanted to get off to a good start. He never got a good enough start to make AA.
24 - Bobby Underwood, Fine Pitcher
Bobby Underwood was fortunate his college coaches pitched him when they did. He got a four-season pro career.
25 - Paul Wagner, One Night
Paul Wagner had it fixed for one night, then saw a no-hitter go past him with one out to go.
26 - Ron Way, Likely Wasn't
Ron Way played four seasons as a pro, but never made it out of high-A. He has since helped open a restaurant.
Posted by Steve78 at 1:00 PM