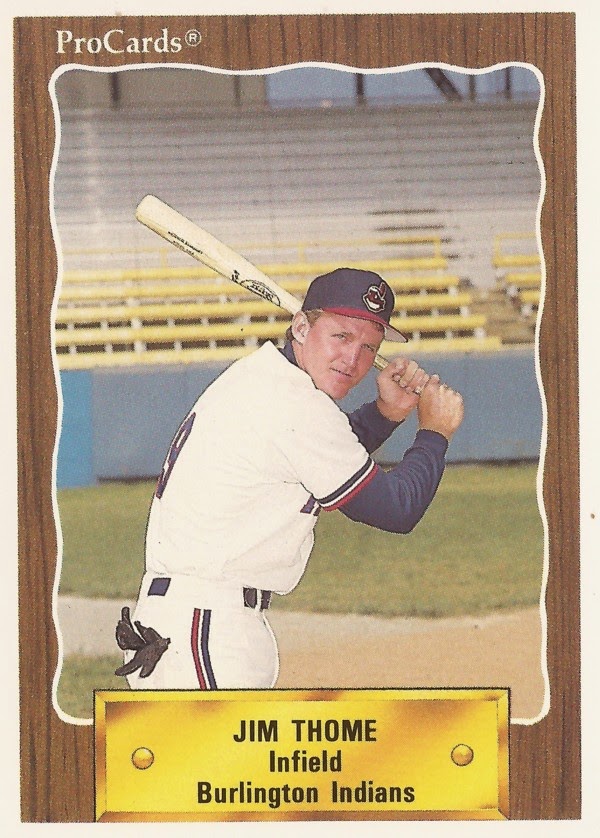 Cleveland Indians scout Tom Couston recalled this junior college player's swing was so quick, he was surprised nobody was killed, according to The Cleveland Plain Dealer.

This hitter at Illinois Central College was a young Jim Thome. Couston was so sure he'd seen something no other scout had, he told The Plain Dealer years later, he had to employ some stealth to talk to him.

"So we're standing back-to-back," Couston recalled to The Plain Dealer, according to the book Jim Thome: Lefty Launcher. "Jimmy kept calling me sir and turning around to talk to me and I kept saying, 'Don't look at me. Keep looking off in the distance.' He probably thought I was a wacko."

Couston was far from wacko. His precautions helped him and his Indians get a future franchise cornerstone, a player who helped the Indians to two World Series, made five all-star teams and a player who went on to use that swing to hit more than 600 home runs.

As it turned out, what Couston had also seen that day: A possible future Hall of Famer.

Thome's career began in 1989, taken by the Indians in the 13th round of the draft out of Illinois Central College.

Thome started with the Indians at rookie Burlington. In 55 games, he didn't hit a home run. By 1991, though, he was on his way to Cleveland, hitting AA and then AAA before a September call-up.

The next January, Thome told The Toledo Blade he wasn't worried at that point how much he was being paid - the major league minimum - he was just interested in more practical matters.

"I want a chance to play major-league baseball," Thome told The Blade. "I was only in the major leagues a month and it spoiled me. I never want to go to the minors again. You get treated so well up here."

Thome ended up going back to the minors for much of the next two seasons. He saw brief time in Cleveland both seasons. It wasn't until 1994 that he was in the majors to stay.

In 1995, Thome helped the Indians to the World Series against the Braves. He hit .314 on the year, with 25 home runs. The Indians went on to lose in six games to the Braves, Thome picking up four hits over the six games.

In his second World Series, Thome picked up eight hits, including two home runs. The result, though, was the same. This one was a seven-game loss.

In 1998, Thome told The Blade his thinking behind his home run reaction after a 414-footer at the SkyDome.

"I don't look," Thome told The Blade. "I don't like to get into that. That guy out there is trying to do his job. He doesn't need me to show him up."

He moved to the Phillies for 2003, staying there for three seasons. Then it was his home state White Sox into 2009. The last of his five all-star appearances came in 2006.

In 2014, Thome was honored by the Indians with a statue at the stadium where his played much of his career.

"I never played baseball for statues," Thome told The Plain Dealer. "I played because I loved the game. I love coming to the park. I love going out for a steak dinner with the guys after the game. I love everything about baseball."