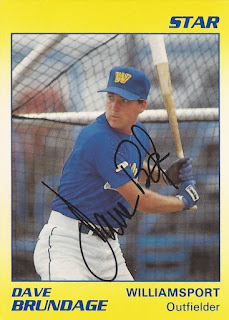 ROCHESTER, NY - Dave Brundage didn't hit a lot of home runs, so the one he hit off former Cy Young winner Fernando Valenzuela is easy to remember, he recalled recently.

The home run came in 1991 when Brundage was playing for AAA Calgary. Valenzuela was on a rehab assignment with AAA Edmonton, a few years past his best campaigns with the Dodgers.

Still, Brundage hit a home run off him. He also made the mistake of admiring what he'd just done.

"I think one of the regrets was that I stood at home plate thinking I was somebody I wasn't," Brundage recalled recently to The Greatest 21 Days. "I remember the catcher telling me I better run, or something like that.

He also remembers the next time at bat: "I got hit in the back of the ass, and deservedly so."

Chalk it up as a lesson learned, one of the many Brundage in his decade as a player. It's also one of the many he's been passing on to other players for the past 20 years as a manager and coach in the minor leagues.

The lesson from that home run off Valenzuela, Brundage said, was respect.

"It's a humbling game," Brundage said. "It's just the nature. That's the way we are. You want guys to be humble. You want them to be respectful and I thing that's something we always pass along on a daily basis."
More recently, Brundage has been passing along those lessons to players in the Phillies system. Brundage serves in 2015 as manager of the AAA Lehigh Valley IronPigs, a job he's held since 2013.

Brundage spoke to The Greatest 21 Days recently in the visiting dugout at Rochester's Frontier Field as his IronPigs prepared to take on the Rochester Red Wings.

The 2015 season marks Brundage's 30th season in the pro game. His first season came in 1986 when the very same Phillies that employ him now took him in the fourth round of the draft out of Oregon State.

Throughout his three decades, Brundage has seen the majors only in Septembers as a coach. He saw parts of six seasons in AAA as a player. The usual position player even spent a season there as a pitcher, but he never making it higher.

Brundage went to Oregon State as an Oregon native. He graduated from McKay high School in Salem.

He recalled baseball as always being a part of his life. He played in high school, but never really had a sense that he could go on to the pros.

He also looked at baseball as something that paid for his education. At the same time he recalled baseball as coming first and education second, something he knows happens with a lot of athletes.
As far as the pros, Brundage didn't really think he was pro material until after his junior year. Now that information is more readily known about players, but he recalled not realizing scouts were there looking at him or others.

"Once you get out there on the field you just kind of get amongst yourself," Brundage said.

Brundage was taken by the Phillies in the fourth round, Brundage having helped lead his team to a division title as both an outfielder and a pitcher. The Phillies put him in the outfield.

After focusing on playing, Brundage recalled having an idea that he'd be drafted. He received official word he'd been drafted, he recalled, after playing football with some friends in a park.

The call came in to a nearby fraternity, he recalled. The person who answered the phone yelled for him to come in.

"I come running in and the phone was still sitting there," Brundage said. "I picked it up and it was the Philadelphia Phillies."

He was turning pro. His first reaction, he joked, was that he didn't have to go to school anymore. But playing professionally was also something he wanted to do.

"Obviously you get to fulfill one of your dreams and that's to play professional baseball," Brundage said.
Brundage started that pro career at single-A Spartanburg. He also had time that year at single-A Clearwater. He hit .227 between them. But he also had some good coaches.

They were also the first of many professional coaches and managers that Brundage would learn from.

"I think you take something from all your managers, whether it be good or bad," Brundage said. "I've always said that all along."

He recalled often having different managers every year. He's also been around some of the great managers in the game, including Bobby Cox when Brundaged managed in the Braves organization.

Brundage's playing way started in the Phillies organization and then moved to the Mariners. In 1995, that way led him to managing himself, Brundage taking a job at high-A Riverside. (Go to Part 2)