Features on each member of the 1990 Asheville Tourists, then the single-A affiliate of the Houston Astros. 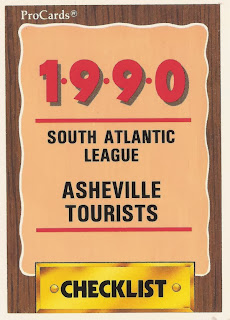 1 - Rich Aponte, Same Approach
Rick Aponte has handed out pitching advice for three decades, after his own brief playing career.
2 - Ed Beuerlein, Baseball Rat
Ed Beuerlein's work ethic earned him the name 'baseball rat.' It didn't earn him a long career.
3 - Frank Cacciatore, Long Time
Frank Cacciatore wanted to be a coach for a long time, has been one now for more than three decades.
4 - Craig Curtis, Bright Spot
Craig Curtis was a bright spot for the GCL Astros in 1989, but he couldn't keep it up. He played just three more seasons.
5 - Gershon Dallas, Two Doubles
Gershon Dallas helped his high-A team with two doubles in 1991 contest. He could only help himself to four seasons as a pro.
6 - Troy Dovey, Another Career
Troy Dovey played 5 seasons as a pro, then eventually went into another career - show business.
7 - Juan Encarnacion, Produced Many
Juan Encarnacion came from baseball hot bed. Only managed three pro seasons for himself.
8 - Chris Gardner, Confidence-Builder
Chris Gardner's manager let him pitch, build confidence. He played a single month in the bigs.
9 - Ben Gonzales, Continued His
Ben Gonzales made the All-Star team at high-A in 1991. His career didn't last much longer. He never made bigs.
10 - Anthony Gutierrez, Get Worse
Anthony Gutierrez gave up big first inning in 1992. Played 6 seasons, never made AA.
11 - Dave Hajek, Made Himself
David Hajek was tagged as major league prospect. He eventually made it, though not in the best circumstances.
12 - Brett Holum, Fundamentally Sound
Brett Holum wanted his players to stay sharp, have fun playing the game. Once had fun himself, as a player.
13 - Brian Hunter, Working Quickly
Brian Hunter had a good season in 1997 with help of his family. He played a decade in the bigs.
14 - Luther Johnson, Put That
Luther Johnson had his ups and downs as a pro. He had them in four seasons, never made AA.
15 - Justin McCray, His Recommendation
Justin McCray was once given chance as a pro. He's now giving others that chance as scout.
16 - Mike McDowell, More Fun
Mike McDowell played three seasons as a pro, later coached youth sports, took a job with the local CPS.
17 - Orlando Miller, That Far
Orlando Miller homered in his third major league game. He hit 24 over parts of four seasons.
18 - Julio Munoz, Short Line
Julio Munoz pitched well in an early 1990 outing. He only pitched as a pro in two seasons.
19 - Francisco Perez, Mistake Inside
Francisco Perez gave up a grand slam in 1990. He played just four seasons, never made bigs.
20 - Ed Quijada, Another Transition
Ed Quijada tried to make transition to pitching. Now has made another big transition after serious car accident.
21 - Limbert Rivas, Good Outing
Limbert Rivas pitched well in an early 1990 contest. He played in just two pro seasons.
22 - Eliezel Rosario, Started Off
Eliezel Rosario started off his pro career strong, but he couldn't keep it up. He played three seasons, never made bigs.
23 - Jose Santana, Stolen Bases
Jose Santana showed his speed right away, but he couldn't keep it up. Played just three seasons as a pro.
24 - Kevin Scott, Veteran Type
Kevin Scott hit a playoff home run in 1992, but few others. Played five pro seasons, never made the bigs.
25 - Mark Small, Not Enough
Mark Small wanted to make the bigs. Once he got there, he wanted to get back.
26 - Donne Wall, Hungry Guy
Donne Wall was a hungry guy. Eventually took that hunger to time in eight major league seasons.
27 - Ken Wheeler, More Leeway
Ken Wheeler threw a marathon game at single-A in 1990. He played five seasons as a pro.
Posted by Steve78 at 1:00 PM