Features on each member of the 1990 San Bernardino Spirit, high-A affiliate of the Seattle Mariners. Players featured are as included in that year's team set. Click on the player's name to read more.

Interview (1)
1 - Keith Bodie, The Reward
Keith Bodie knows the reward for a minor league coach comes years later with a 'thank you.' 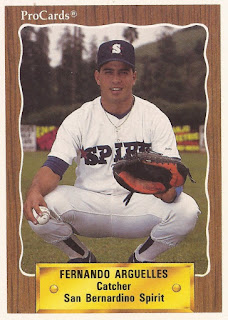 1 - Fernando Arguelles, On Top
Fernando Arguelles helped Florida Southern to two titles. He played four seasons as a pro.
2 - Batboys, Fun Job
The San Bernardino Spirit batboy job was a fun one.
3 - Jim Bennett, Pitching Ahead
Jim Bennett's long coaching career now includes time in Australia.
4 - Keith Bodie, His Philosophy
Keith Bodie has tried to get players as good as they can be.
5 - The Bug, Sight and Sound
San Bernardino's mascot "The Bug" was played by a truck driver.
6 - Isaiah Clark, Mature Person
Isaiah Clark suffered a knee injury 15 games into his career. He made it back, but he never made the majors.
7 - Roberto Del Pozo, Delivered It
Roberto Del Pozo delivered the go-ahead run in a June 1991 game. He played four seasons as a pro.
8 - Rich DeLucia, Of Relief
Rich DeLucia always wanted to play baseball. He played ten years in the bigs.
9 - David Evans, Played Hard
David Evans was carried off the field injured in college. He played a decade in the pros. 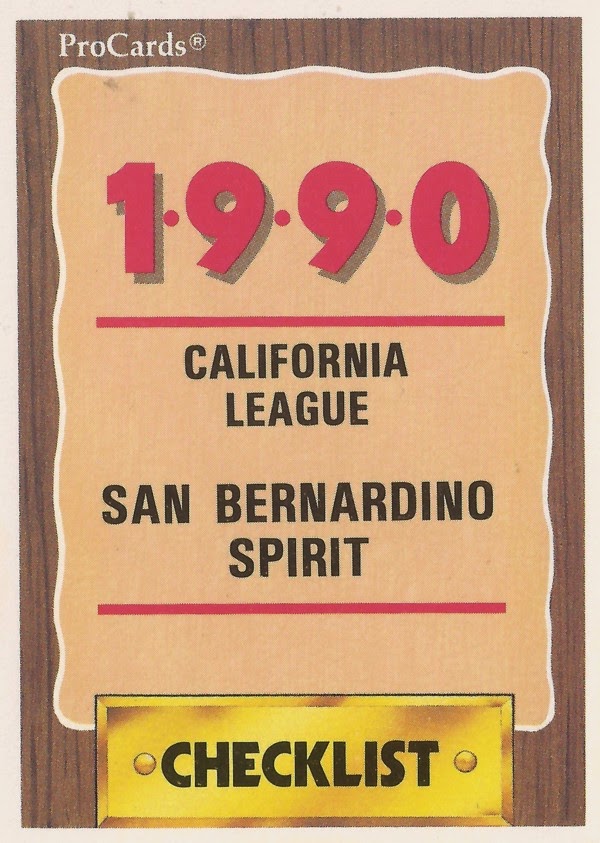 10 - Dave Fleming, Fully Appreciated
Dave Fleming fully appreciated playing baseball.
11 - Manuel Furcal, Long Save
Manuel Furcal picked up a long save in 1990. He played four seasons as a pro.
12 - Calvin Jones, Didn't Quit
Calvin Jones had a poor outing for the Mariners, but he didn't quit.
13 - Jeff Keitges, Home Run
Jeff Keitges helped his team to a win in 1990 with a home run. He played four seasons as a pro.
14 - Tyrone Kingwood, Raw Ability
Tyrone Kingwood had raw athletic ability. That's why the Expos took him. He didn't get to the bigs.
15 - Chuck Kniffin, With Strengths
Chuck Kniffin got his chance to coach in bigs with the Diamondbacks. He played in the minors with the Phillies.
16 - Pat Lennon, Raised Him
Pat Lennon didn't have control. He then changed he made the bigs.
17 - Bobby Magallanes, No Joke
Bobby Magallanes helped send players to the majors as a manager.
18 - Tony Manahan, Showed Confidence
Tony Manahan showed confidence in his seven pro seasons.
19 - Ellerton Maynard, His Wheels
Ellerton Maynard showed his wheels at single-A in 1990. He played six seasons, but not in the bigs.
20 - Steve Murray, Big Difference
Steve Murray's hit turned a 1984 College World Series game, He played in eight pro seasons.
21 - Tim Newlin, Door Slammed
Jim Newlin helped Wichita State to the 1989 College World Series title. He played seven seasons as a pro.
22 - Greg Pirkl, New Position
Greg Pirkl did well enough at his new position to make the Mariners. He then tried pitching.
23 - Scott Pitcher, Adjustment Made
Scott Pitcher improved with a minor adjustment. It wasn't enough for him to make the majors.
24 - Roger Salkeld, Through Injury
Roger Salkeld never lived up to his first-round status. He still made the bigs in three seasons.
25 - David Smith, First Pitch
David Smith made a first pitch a double in a 1989 game. He played just two seasons as a pro.
26 - Tim Stargell, Team MVPs
Tim Stargell made team MVP in first three seasons. He only played in four.
27 - Scott Taylor, Much Fun
Scott Taylor held off on his pharmaceutical career, he then made the majors.
28 - Brian Turang, Motivated Him
Brian Turang wasn't a major league prospect. But he still made it to the majors.
29 - Johnny Wiggs, With Emotion
Johnny Wiggs pitched with emotion as a reliever. He played five seasons as a pro.
30 - Ray Williams, Two Sports
Ray Williams played two sports in college. He tried both as a pro.
31 - Kerry Woodson, Big Butterflies
Kerry Woodson had big butterflies in his major league debut. He played in just eight games.
Posted by Steve78 at 3:24 PM