Features on each member of the 1990 Omaha Royals, AAA affiliate of the Kansas City Royals. Players are as included in that year's team set. Click on the player names to learn more.

Interviews (4)
1 - Bobby Meacham, Shocking Moments
Bobby Meacham described the moment he made the majors as shocking.
2 - Russ Morman, Playing A Game
Russ Morman had no idea the significance of what he'd done. He was just playing a game.
3 - Sal Rende, Performed Well
Sal Rende had five games to prove himself. He did and he's been the game ever since.
4 - Gary Thurman, Started Something
Gary Thurman pushed through a slow minor league start on advice from his mother. He then made the majors. 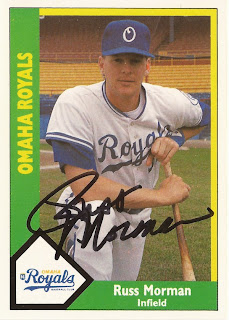 1 - Jay Baller, Made Adjustments
Jay Baller came back from a mysterious illness to return to the majors. He played in six major league seasons.
2 - Kevin Burrell, A Passion
Kevin Burrell relaxed, hit a minors game-winner. He later became a scout.
3 - Ray Chadwick, Without a Win
Ray Chadwick got seven major league starts for the Angels in 1986. He lost five of them, won none of them. He never got back.
4 - Dera Clark, Good Job
Dera Clark's pro career spanned a decade, including seven seasons in the Royals system. He never made the majors.
5 - Luis de los Santos, Every Night
Luis de los Santos thought about getting back to the majors every night. He made it back.
6 - Rich Dubee, Four Aces
Rich Dubee knew even with a top Phillies pitching staff, they still had to pitch. 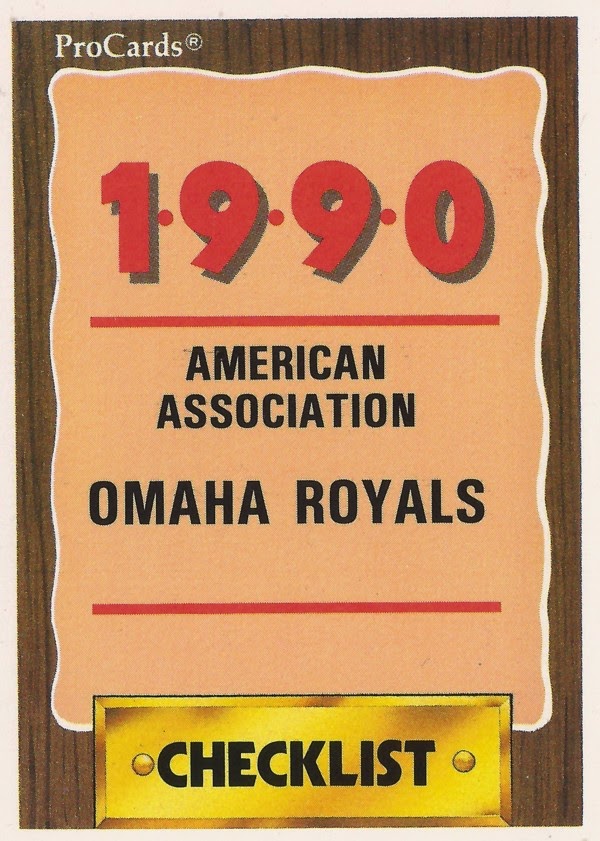 7 - Luis Encarnacion, Down Hill
Luis Encarnacion made it to the majors in 1990 with the Royals. He was there for only four appearances.
8 - Tony Ferreira, Tight Spin
Tony Ferreira helped David Cone get extra major league time. He also helped himself to two major league appearances.
9 - Pete Filson, Liked to Play
Pete Filson returned to the minors in 1989 for another shot at the majors. He made it back.
10 - Bob Hamelin, Mentally Prepared
Bob Hamelin won Rookie of the Year honors in 1994 with the Royals. He couldn't repeat that success.
11 - Jim LeMasters, Trouble Spot
Jim LeMasters worked as a starter and reliever in the pros. He never got the chance to do either in the majors.
12 - Mike Loggins, Learned French
Mike Loggins learned how to play the Arkansas outfield wall. He then played as a pro for seven seasons. He never made the majors.
13 - Mike Magnante, Numbers Man
Mike Magnante tore up his knee playing basketball. He then came back to make the majors - and teach math.
14 - Chito Martinez, Wrapped Up
Chito Martinez played in parts of three seasons with the Orioles. A season-starting slump soon ended his major league career.
15 - Andy McGaffigan, More Work
Andy McGaffigan hoped to get more work after trades. He finally got it with the Expos.
16 - Bobby Meacham, Developing Consistency
Bobby Meacham continued to be with the Yankees in 1987 and the next year. He ended with six seasons in the bigs.
17 - Russ Morman, Bigger Thrill
Russ Morman picked up two hits in one inning - in his major league debut.
18 - Bill Pecota, Big Lift
Bill Pecota wanted a regular major league role, but a utility one suited him.
19 - Tom Poquette, Learning Task
Tom Poquette's coaching career spanned nearly two decades, including time as Royals hitting coach.
20 - Harvey Pulliam, Kept Running
Harvey Pulliam hit eight home runs in his major league career, two of them came in one game.
21 - Thad Reece, Losing Some
Thad Reese played a decade in the minors, he never made the majors.
22 - Sal Rende, Us Guys
Sal Rende sent players on to the majors. He never got there himself.
23 - Jeff Schulz, Better Feeling
Jeff Schulz played three seasons in the majors, then found a better feeling coaching kids in high school.
24 - Tim Spehr, Don't Break It
Tim Spehr wasn't a home run hitter. He ended up hitting 19 in 363 big league games over eight seasons.
25 - Mel Stottlemyre, Jr., Waited For
Mel Stottlemyre, Jr., waited into his sixth pro season to get his call to the majors.
26 - Gary Thurman, Hurricane Tested
Gary Thurman waited out a hurricane, then went on to play in nine major league seasons.
27 - Mike Tresemer, Inherited Runners
Mike Tresemer inherited runners, then picked up the win. He played five seasons, but not in the bigs.
28 - Bill Wilkinson, Felt Good
Bill Wilkinson got a long-relief win for the Mariners in 1988. He got into three major league seasons.
29 - Paul Zuvella, Relaxed Aggression
Paul Zuvella knew he could play with major leaguers. He eventually played as one in nine seasons.
Posted by Steve78 at 12:02 PM