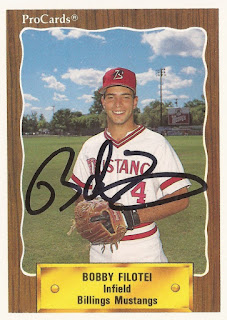 KEENE, N.H. - Bobby Filotei never could hit very well, but he could field. On this day in June 1990, though, it seemed Filotei could hit with the best of them.

At a Reds workout camp in Alabama after going undrafted, the University of South Alabama product got base hit after base hit, Filotei recalled to The Greatest 21 Days.

A Reds scout soon responded with a mid-session offer, Filotei recalled. The Reds had a spot for Filotei. One thing, though, Filotei recalled being told, Filotei should keep it quiet until the workout's conclusion.

"That was probably the longest hour of my life," Filotei recalled, "waiting for this thing to get over with."

Filotei quickly signed and he met his parents at the airport back home to pick up his things before heading on to his first professional destination in Montana. His father, Filotei recalled, came prepared.

"When my dad and mom picked me up at the airport," Filotei said, "my dad already went out to the store and had a Reds hat on."

Filotei's offer from the Reds ended up getting him three seasons as a pro in the Reds system. He never made it higher than single-A, but he did help win a minor league championship at Cedar Rapids.

But his father would continue to need that Reds hat for more than a decade after his son left the field as a player. That's because, playing career over, Filotei quickly started a new career as a scout, looking for and evaluating young players.
Filotei spent a decade as a scout for the Reds and another decade with the Padres. For the Padres, he's been credited with finding future World Series hero David Freese, who made his way to the Cardinals after first getting drafted at Filotei's recommendation by the Padres.

In 2016, Filotei's father is in his third season of wearing a Cubs hat, as Filotei serves as a crosschecker in the southeast for Chicago's North Siders.

The Greatest 21 Days spoke with Filotei on a chance meeting in April at Keene State College in New Hampshire, where Filotei helped out his northeast crosschecker counterpart by scouting a home team hurler. (The interview that sparked the trip: visiting Southern Maine assistant coach Vinnie Degifico.)

Filotei's brief playing career took him to Billings, Mont., Cedar Rapids, Iowa, and Charleston, W.V. Before that, though, he grew up in Levittown, Pa., just across the New Jersey border from Trenton, and went to college in Alabama.

Filotei's father, Jim Filotei, played baseball in high school and even got a look from the pros afterward, but never got signed.

Filotei and his older brother, also Jim, played multiple sports growing up. But baseball was the sport the family gravitated toward. Their father coached them through Babe Ruth.

Filotei looked at baseball as a fun game. He got to play different positions as a kid. He also looked at it as a way he could pay for school.

The location of his school ended up being down south, in Alabama. Filotei first played two years at Faulkner State Community College there, then his junior and senior campaigns at South Alabama.

He first looked at the state because his brother went to school there and played baseball there. Filotei recalled seeing his brother play there and wanting to follow him.
"It was a lot warmer down there," Filotei said. "There was a lot more baseball to be played. So I always told my dad that if I can go down, I want to go down."

Some schools in Pennsylvania and New Jersey recruited him, but he saw better players in the South and he wanted to see if he could compete there.

Turned out, he could compete. He also played with a handful of fellow players from the Northeast, helping with the transition.

"Even though they weren't from where I grew up, at least there were some Northern kids that I could kind of associate with," Filotei said. "But it was good, like I said you get to play with some good players, a little bit of a higher talent and you see where you stand.

"That's when the light kind of comes on and you think, 'Hey, if I work at this hard enough, I may get a chance to play,'" Filotei said.

By the time he got to South Alabama, Filotei recalled really thinking of the pros as a possibility. An assistant coach, a middle infielder himself, returned from laying professional baseball and brought with him some insight into the pro ranks.

"He taught me a lot of things that I didn't know about already and I felt that that gave me the upper hand," Filotei said, "because I was never a great hitter, but I could really field and I could run."

"It gave me a chance to go out and see if I could develop as a hitter, which I didn't, but it gave me the opportunity to get my foot in the door."
Filotei also recalled benefiting from an injury. South Alabama teammate and shortstop Mike Mordicai got hurt Filotei's junior year. Filotei, then a second baseman, moved to short to fill in.

When the future major leaguer Mordecai returned, Mordecai moved to third, leaving Filotei at the position that better fit his hitting skills.

"It kind of gave me a little bit more of an avenue," Filotei said, "because that's where a light-hitting player can play if they can play good defense and run."

Having projected high-round picks like Mordecai on the team also helped with bringing in the scouts. Filotei recalled factoring that in when deciding on a school. He'd rather go to a school where he knew scouts were going to come, than one where he'd have to hope they were going to come.

It seemed to pay off. He recalled making some good plays that junior year and the scouts took notice. He recalled hearing a couple put him on their watch list as a senior, giving him a shot then.

When the 1990 draft approached, Filotei recalled a few teams contacted him looking for more information, raising his hopes of being drafted. But he went undrafted and he returned home to Pennsylvania.

He then heard from one of his old coaches about the Reds workout back in Alabama. At first Filotei was skeptical. They'd seen him play. Why did they need to see him play again?

"Well," Filotei recalled his old coach relaying to him, "they need a shortstop."

"I told my dad, 'Well, this may be my only opportunity,'" Filotei recalled. "I flew down there, had a good workout and, as soon as it was over, ... they flew me back home to Pennsylvania to get my stuff and the next morning I was in Billings, Mont." (Go to Part 2)