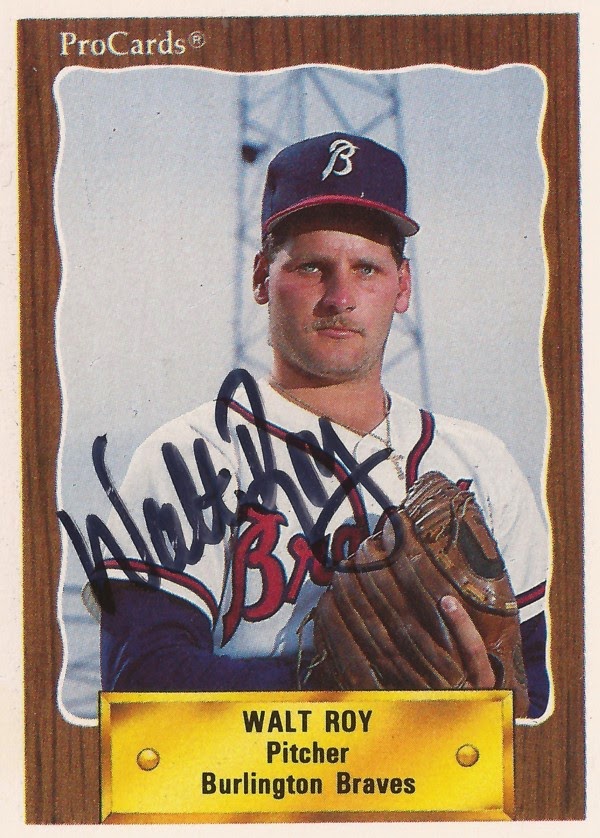 Walt Roy pitched well in college, but injuries and other issues had held him back.

So, when the 1989 college season was coming to a close and another injury slowed him further, Roy told his coach he was ready to move on.

Roy had just been healthy enough to pitch at one league game, talking to his coach there. He recalled striking out five of the six batters he faced. But he was also ready to be done with school. He was also ready to get a regular job.

Soon, though, the Braves came calling.

"They made an offer and the next thing I know I'm on a flight going down to Pulaski, Va.," Roy recalled to The Greatest 21 Days recently.

"It was neat. I was excited," Roy added. "I started packing my things and I was ready to go. It was something I always wanted to do."

Roy went on to play two seasons in the Braves organization, the injuries he suffered in college coming back to help limit his professional playing career.

Along the way, though, Roy got into 48 professional games between rookie Pulaski and single-A Burlington. He also helped introduce future Braves star Javy Lopez to the English language.
Roy spoke with The Greatest 21 Days by phone from his home in Michigan. He spoke of growing up in a small town, part of a large family. He then went on to college at the direction of a pro scout, but he kept getting pulled home by family ailments and tragedy.

His pro career lasted those two seasons, before finally ending in an aggravated shoulder injury. He tried to get back, but it didn't work.

Roy grew up in West Branch, MI, a small town in northern Michigan. It was the same town where he met and married his wife of two decades Jodi.

Roy came from a family that had showed some promise in baseball. He recalled hearing stories of his uncle getting a tryout with the Tigers and doing well but not signing.

His immediate family was a large one. Roy was one of 10 children. He was ninth, the final of five boys. He recalled his older brothers playing the game, especially his brother who was a year and a half older than him. Roy tagged along, as well.

He recalled going with one of his brothers to get the neighborhood kids to play. "Even if it was only three kids on each team, we'd close down half the field."

"It's always been my life to just play baseball," Roy said.

Roy recalled always being able to throw hard for his size. Getting to play with older kids, he said, made him especially competitive.
In high school, he did well. He recalled going 9-0 his junior year and 8-0 his senior year and making the all-state team twice. Scouts from the Dodgers and the Phillies even expressed interest.

"It was neat and everything like that," Roy said of the interest from scouts, "and it was my dream. But I always looked at it as it didn't matter who I played. I always took them serious."

One thing that caused some questions, though was his size. He was 5 feet, 9 inches tall. He recalled being told by some that his size would prevent him from being a pitcher.

Roy responded by working harder. "That was a driving force for me to get better," Roy said.

He lifted weights to increase his velocity. He also worked on his control by throwing against a building.

"I always threw against the school wall trying to hit a certain brick of cement," Roy said. "I always worked on my control."

He recognized control was something that could set him apart from others.

The interest from scouts in high school didn't get him drafted, but it did give him some direction. The scout from the Dodgers set him up at a school in Iowa, Des Moines Area Community College in Boone.
His time there didn't go well. He was far enough from home and a big enough city. More importantly, his mother was hospitalized with asthma. "That messed with my head a little bit," Roy said. "I was more concerned about her than worrying about my ball out there."

On the field, Roy spent time pitching. He also played some infield at shortstop. He had a good glove and a strong arm, he recalled. Hitting was always a weak spot. He also injured his elbow.

Roy left Boone and then went through three more colleges, Central Michigan University, Mott Community College and Saginaw Valley State University. After Central Michigan, he took a year off. One of his brothers passed away and he took the time to set himself back in the right mind.

When he got back into the college game, he took another shot at putting himself in a position to play professionally.

"I knew I wanted to get back into it," Roy said. "I felt good. I knew it was always my lifelong dream to play pro baseball."

He played in a summer league and pitched well against players who hailed from major colleges. At Mott he recalled only losing one game. He also played well after moving to Saginaw Valley State.

From Saginaw Valley, Roy made the pros, signing with the Braves and on his way to the Appalachian League.

"That's why I went back to school," Roy said. "I figured I could do it. I always had the talent. It was good to hear. I wasn't expecting it and I was all gung-ho for it." (Go to Part 2)