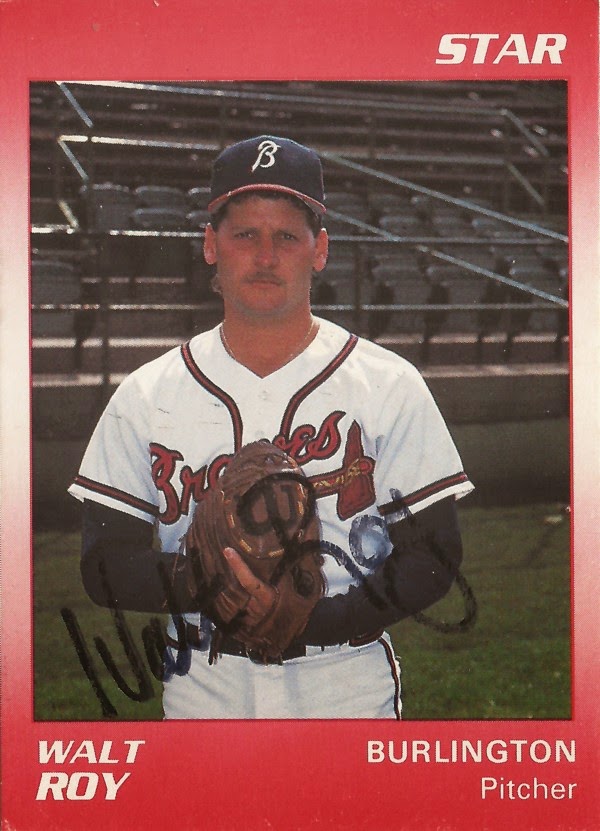 Walt Roy remembered arriving with the rookie-league Pulaski Braves and heading straight to the ballpark for that night's game. He didn't even have a place to stay.

But first, after the game Niekro took the group out for a late dinner - at the local Hardee's.

"We stayed out until five in the morning talking baseball with him," Roy recalled recently to The Greatest 21 Days. "Then the next day he let us take his car to go out and find a place to live."

"That was something special," Roy added later. "He was a great guy, one of the nicest guys I ever met in my life as a pro athlete."

Roy also met Javy Lopez that year, as the Puerto Rico-native Lopez also acclimated to his first season as a pro.  Roy was one of Lopez' roommates, helped him learn proper English and got a mention in Lopez' memoir.

Roy spoke with The Greatest 21 Days recently by phone from his home in Michigan. He spoke of growing up and learning the game in a small town. He then went on to college at the direction of a pro scout, then eventually turning pro with the Braves.

His pro career ultimately lasted two seasons, ending with an aggravated shoulder injury. He tried to get back, but it didn't work.
Roy's pro career began out of Saginaw Valley State. He signed with the Braves and soon found himself in the Appalachian League.

His pitches started to move a little more.

"It's hard to say exactly how I felt that first game," Roy said, "just getting out on the mound, 'here we go, got to do good, just focus."

Baseball Reference has Roy going 2-1. Roy remembers going 3-1. His loss, he recalled, came against Martinsville in one of his two starts. He ended with a 2.12 ERA in 14 total outings.

It was at Pulaski that Roy played and roomed with Lopez, along with another teammate, Darren Ritter and Roy's wife.

Lopez wrote in his book of having to learn English living with them. Roy recalled that also involved Lopez not learning certain aspects of the language.

"I remember some of the guys on the team were trying to teach him some bad words in English," Roy said, "I told Javy, 'Javy, those words are not words you want to learn.'
Years later, Roy recalled taking his family to Florida and stopping by Braves spring training. Lopez took Roy and his family into the clubhouse to visit.

When they were done, Roy recalled coming out and Lopez signed autographs for everyone who wanted one, holding up the team bus to do so.

"He was always there for the fans," Roy said.

After his season at Pulaski, Roy recalled returning home and working out harder. In 1990, that resulted moving up to single-A Burlington.

Burlington and the Midwest League were closer to his home in Michigan, Roy noted. In his first outing, though, Roy recalled lasting two outs, giving up four earned runs.

That troubled outing put his ERA in a hole that he had to dig out of. But he trimmed it back down and in the second half, he recalled going through a stretch where he only gave up one earned run.

"I was talking with my dad and he goes 'I can't believe they didn't move you up," Roy recalled. "I go, 'it is what it is. They have a plan for me.'"
But Roy also got injured that year. It was toward the end. He was shagging balls during batting practice and he tripped, landing on his shoulder. He was out for two weeks.

He came back, got into a few more games. Then, in a six-inning outing, he hurt his shoulder again.

"I didn't feel anything go wrong," Roy recalled. "I woke up in the morning, my shoulder was hurting, it was bruised."

He told his trainer, but the thought was he just strained it. But every time he tried to throw, it felt like his arm was coming out of the socket.

He threw in a couple more games, getting two more saves. But he couldn't throw his regular fastball, his shoulder hurt so bad. He threw a cut fastball.

He returned home and tried to rest it. But he got a call that the Braves were looking at him for the 40-man roster. He reported to Florida, but he could hardly pitch.

He told his old pitching coach  Matt West. After a trip to a doctor, the verdict was a possibly torn rotator cuff.

Roy wasn't making the 40-man. He underwent surgery and rehabbed into the next season. As he rehabbed, he was assigned to high-A Durham. Every time he tried to pitch, though, he seemed to have problems.
Roy stuck it out through spring 1992. He had a good day throwing with Lopez. The next day, though, he topped out in the low-80s in a game situation.

"From one day to the next, it just died," Roy said. "The next morning, I got a knock on the door and I was released that morning."

Roy knew he was done. His shoulder wasn't getting any better.

"Up until then, I just did my rehab and hopefully it would come back," Roy said. "I figured I'd give it the best shot I could and it just never panned out."

His career over, Roy and his wife Jodi returned to Michigan and raised their family. They've been together since 1988, married for nearly 20 years. They have two boys, age 19 and 22.

Roy's tried to stay involved in the game by giving lessons. His day job is as a corrections officer with the state of Michigan.

"I told my wife I still think about every once and a while the guys I played with and I was just as good," Roy said. "I see how they made it up to the big leagues and played a few years. But what can you do?"