Features on each member of the 1990 Visalia Oaks, high-A affiliate of the Minnesota Twins. 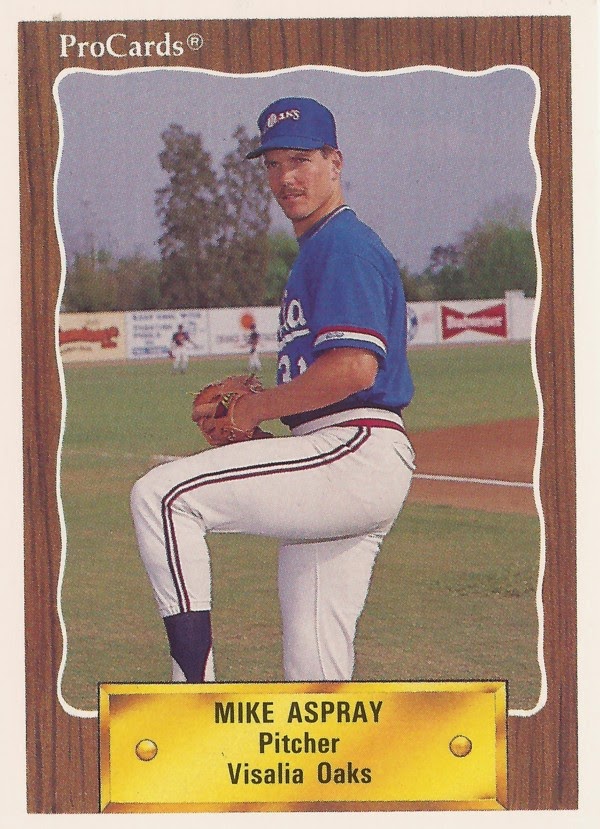 1 - Brian Allard, Main Objective
Brian Allard played in three major league seasons, went on to a career coaching young pitchers in the minors.
2 - Mike Aspray, Settled For
Mike Aspray nearly got a perfect game at single-A, settled for a no-hitter. He played four seasons, never made the bigs.
3 - J.T. Bruett, More Selective
J.T. Bruett tried to be more selective. He was successful enough to get time in two major league seasons.
4 - Troy Buckley, Test of Response
Troy Buckley tried to get a response from his Long Beach State pitcher. He got it with four scoreless.
5 - Brian Bucz, Best Promotion
Brian Bucz knew that as general manager the best promotion was winning.
6 - Joseph Bucz, Both Fixtures
Joseph Bucz and his wife Mary were both fixtures at Visalia Oaks games.
7 - Chris Capellan, Started Slow
Carlos Capellan played eight seasons as a pro. He made AA, but not the majors.
8 - Ramon Cedeno, Lucky Night
Ramon Cedeno tried to hit a ball hard in each at bat. He played as a pro for eight seasons, never made the bigs.
9 - Jason Elick, Collected Himself
Jason Elick served as a Visalia Oaks bat boy. He also got his own card.
10 - Tom Fine, Lost Concentration
Tom Fine lost his concentration at single-A, then lost 11 games to no wins. Played four seasons, never made the bigs.
11 - Carl Fraticelli, Came Ready
Carl Fraticelli's Aliis came ready to play. Fraticelli came with his own playing and coaching experience.
12 - Rich Garces, Proved Himself
Rich Garces finally got his chance to prove himself, then he ran with it.
13 - Jose "Cheo" Garcia, Twins Tour
Cheo Garcia played as a pro for six seasons, made AAA in two of them. He never the bigs.
14 - Darren Holt, Different Role
Darren Holt served as the Visalia groundskeeper in 1990. He previously played.
15 - Mike House, Different Path
Mike House turned his career around at new school. He couldn't turn it around enough for a long pro career. 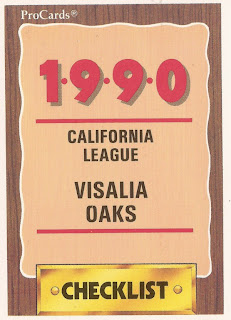 16 - Jay Kvasnicka, Means Everything
Jay Kvasnicka's AA playoff run meant everything to him. He never made the majors.
17 - Todd Logan, Tough Kid
Todd Logan was called a tough kid, competitor. His pro career lasted just four seasons.
18 - Pat Mahomes, Paying Off
Pat Mahomes saw a resurgence late in his career. He played in 11 major league seasons and in Japan.
19 - Dan Masteller, Like This
Dan Masteller didn't bunt, was given green light and hit his first major league home run. It was a walk-off.
20 - Bob McCreary, Toughest Adjustment
Bob McCreary tried two paths to the bigs, hitting and pitching. He never made it in either.
21 - Denny Neagle, Already Familiar
Denny Neagle made connections in his new town, it led him to the Mitchell Report.
22 - Ray Ortiz, Winning Teams
Ray Ortiz helped his minor league teams to titles. In eight pro seasons, he never got a chance to help one in the majors.
23 - Joel Safly, Little Things
Joel Safly became a school athletic trainer after a brief pro stint.
24 - Dan Segui, Some Kids
Dan Segui's father and brother made the bigs. In four seasons, Dan Segui never made it.
25 - Robert Spurlock, Well Acquainted
Robert Spurlock was in his fourth season as Visalia bat boy in 1990.
26 - Chad Swanson, Successfully Deployed
Chad Swanson and a teammate decided to pull a prank in 1988. Their chosen targets: The umpires.
27 - Mike Trombley, Good Times
Mike Trombley took the good times with the bad. He did so for 11 major league seasons.
28 - George Tsamis, Greatest Place
George Tsamis saw the big leagues as the greatest place. It was. And he was there for a single season.
29 - Scott Ullger, Chance Taken
Scott Ullger looked forward to returning to the bigs as a player, later returned as a coach.
30 - Fred White, Unlimited Potential
Fred White impressed scouts in high school with a 20-strikeout game. He played eight seasons as a pro, never made the bigs.
31 - Phil Wiese, Left Off
A torn rotator cuff forced an early end to Phil Wiese's baseball career, an early start to his golf career.
Posted by Steve78 at 9:00 PM