Features on each member of the 1990 Memphis Chicks, AA affiliate of the Kansas City Royals. Players are as included in that year's team set. 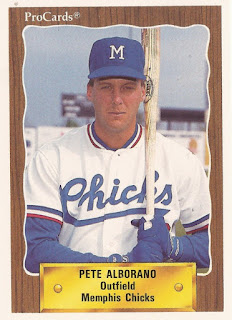 1 - Pete Alborano, Grand Slam
Pete Alborano played seven seasons in the pros, never made the majors.
2 - Sean Berry, Good Player
Sean Berry knew what his abilities were, enough to see time in 11 major league seasons.
3 - Jim Campbell, High Pitches
Jim Campbell struggled in his first major league start, did better in his second. He never got another.
4 - Scott Centala, Could Throw
Scott Centala took advantage of opportunity to pitch at AA, never had opportunity to pitch in the bigs.
5 - Stu Cole, Paid Off
Stu Cole speaks from experience as both a player and a manager. He went on to speak as a Rockies coach in Colorado.
6 - Victor Cole, Was Relaxed
Victor Cole threw strikes and went after hitters. He did so in eight major league games.
7 - Jeff Conine, Ground Floor
Jeff Conine got in on the ground floor. He then became Mr. Marlin. 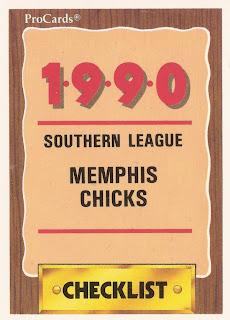 8 - Jeff Cox, More Practice
Jeff Cox had plenty of practice, both as a player and as a third base coach.
9 - Andres Cruz, Five Innings
Andres Cruz made the Royals system after a deal with a Mexican club. He played two seasons at AA, never made Kansas City.
10 - Tommy Dunbar, Bad Break
Tommy Dunbar got sent back down. He responded by just trying to show he could play, and get back.
11 - Greg Everson, Big Pitch
Greg Everson couldn't get himself closer to the bigs than AAA. He did get his AAA Royals closer to the 1990 title.
12 - Guy Hansen, How Interested
As a scout, Guy Hansen got the Royals to draft Bret Saberhagen. He later became Royals major league pitching coach.
13 - David Howard, Stay Healthy
David Howard tried to stay healthy, played in nine major league seasons.
14 - Joel Johnston, Did It
Joel Johnston came back from a rough start in 1993 to return to the bigs. He made it there in five seasons.
15 - Kevin Koslofski, Took Off
Kevin Koslofski finally got the concept of hitting at AA. He soon took off to Kansas City.
16 - Frank Laureano, Singular Goal
Frank Laureano just wanted to make the big leagues. He never realized that goal in six seasons as a pro.
17 - Richie LeBlanc, Groundball Pitcher
Richie LeBlanc was a groundball pitcher. He couldn't take that style to a long career in the pros.
18 - Mike Leon, Trainer's Ring
Mike Leon got his World Series ring in 1997 as a AAA trainer with the Marlins.

19 - Carlos Maldonado, Fifth Outing
Carlos Maldonado made the bigs in three seasons with the Royals and Brewers, part of a nine-season pro career.
20 - Brent Mayne, Amateur Psychologist
Brent Mayne practiced his own amateur psychology in 15 major league seasons.
21 - Brian McCormack, In It
Brian McCormack kept his short-season team in the game. He later couldn't get himself in the majors.
22 - Brian McRae, Relaxed and Confident
Brian McRae couldn't hear the crowd after his first hit, his heart was pumping too loud.
23 - Bobby Moore, Next Level
Bobby Moore works in the minors to get players to the next level. He has continued that work.
24 - Jorge Pedre, Pretty Consistent
Jorge Pedre was consistent enough to make the bigs, but not enough to stick.
25 - Brian Peterson, Not Unlike
Brian Peterson coached for more than a decade, played for four seasons, never made majors.
26 - Kyle Reese, Greate Combination
Kyle Reese has helmed a high school baseball program after a pro career that lasted eight seasons. He never made the bigs.
27 - Doug Nelson, Young Pitcher
Doug Nelson did OK in 1989 with 12 wins. His career soon ended, though, short of the majors.
28 - Hector Wagner, First Win
Hector Wagner got his first major league win in his sixth start. It ended up being his only major league win.
Posted by Steve78 at 9:00 PM