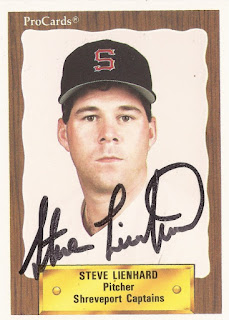 He not only returned from injury that year to pitch for his El Paso Diablos and pitch well, he also got to face some of his old teammates and the organization he'd spent four seasons with only to be let go.

Lienhard took the mound in the first game, he recalled, and helped his club to an early series lead. He then returned later in the series, pitched as well as he likely had ever pitched - and lost, 1-0.

"I went the whole way," Lienhard recalled recently of that later championship series game. "It was probably the best game I ever pitched and I lost. But it's one I'll never forget because it was against a bunch of my buddies that I played with for two to three years."

Lienhard pitched for the Brewers organization in El Paso that year in his fifth professional season - his first four played in the Giants system. He got into one more season, but he never made the majors.

Looking back, Lienhard recalled he had what teams needed in filling certain roles on their minor league pitching rosters, but, he recalled, he didn't have that something extra, specifically the velocity, to push him on to the majors.

"I was a perfect minor league fill-in pitcher guy," Lienhard told The Greatest 21 Days by phone from his Kansas home, "because you could use me - I mean I started, I closed, I was a middle guy, I set up - I mean I did anything and everything because I threw strikes.

"But they never thought I could sustain, I don't think, in the big leagues with the velocity that I had."
Lienhard spoke to The Greatest 21 Days about growing up in the sport in Oklahoma, then pitching at Oklahoma State and on to his six seasons in the pros.

He has since gone on to a career as a high school and youth instructor and coach in his native Kansas. As an instructor, Lienhard came across one particularly special young pitcher in Mike Pelfrey and helped him on to a long major league career.

Lienhard's own long career with baseball began in McAlester, Okla., with the help of his older brother, Paul. Paul Lienhard, an all-state basketball player, also played baseball. Lienhard tagged along to practice and even served as a bat boy.

Lienhard liked basketball, too, like his older brother. But he also hoped to play professionally and he didn't think he could go far in that sport. He soon focused on baseball, pitching especially.

"I liked to perform," Lienhard said. "When I started pitching, I realized that, 'Hey, everybody was watching me and I could show them what I liked to do what I felt like I was good at."

"If you do well when you're out there it's a very positive reinforcement," Lienhard added a little later. "It's a very good feeling to be a success when there's a lot of people watching when you do your craft or do your job, whatever it might be."

Lienhard pitched for his high school team in McAlester, but he seemed to save his best performances for the summer and American Legion ball. Lienhard credited some of his summer success to his later coaches.

The coach, Lienhard said, first introduced the young pitcher to the importance of mechanics, bullpen sessions, pitching inside and changing speeds.
Lienhard also got some attention from a local scout who even asked if Lienhard would sign out of high school, if drafted. Lienhard, though, knew the importance of his education.

In the end, both his Legion coach and the scout spoke to the coaches at Oklahoma State. Lienhard tried out and made the 1982 Cowboys as a walk-on.

"That was probably the transition of starting to figure out, 'Hey, alright, now you're going to be a baseball player, you need to start thinking a little bit different and working a little bit harder at it,'" Lienhard said.

Red-shirted his first year, Lienhard steadily pitched more and more until he got drafted as a fifth-year senior.

That first year, though, he also quit as a strong Oklahoma State pitching staff and other obligations of a freshman pulled him away from the team. A return to Legion ball the next summer got him back on track.

After struggling with playing time, Lienhard started to get on the mound and have success. As his team made the College World Series in 1986 and 1987, Lienhard recalled pitching in relief in five or six games.

In one, a 1986 game against Florida State, he recalled striking out future major league Paul Sorrento with the bases loaded and a one-run lead.
"That's one of the times I still tell kids about," Lienhard said, "how nervous I was at the time and how I had to collect myself and my thoughts. It's just things like that that really help you grow in sports."

Lienhard quickly added that he gave up a single the next inning, which led to the game-tying run in a game Florida State would go on to win.

"It's one of those you kind of remember, that sticks in your head," Lienhard said, adding with a laugh, "It seems like I remember the losses more than I do the wins. But, no, I have a lot to be thankful for."

Going into the 1987 draft, Lienhard had an idea he'd be drafted. But it ended up being a long wait. His team still in Omaha, the first day went by with no word. The second day, too.

He even asked coach Holliday. Holliday could only say he thought the Rangers would get him.

Then, finally, Lienhard's mother got word at the family's house via telegram: The Giants selected Lienhard in the 29th round.

"That was really an exciting time," Lienhard said, "because you hear so many guys that don't ever get drafted that are probably as good or better. You just never know what it's going to take from a guy like me."

Lienhard soon signed and he found himself on his way to Pocatello, Idaho, and rookie ball. (Go to Part 2)