Features on each member of the 1990 Greensboro Hornets, single-A affiliate of the New York Yankees. Players featured are as included in that year's team set. Click on the player's name to read more. 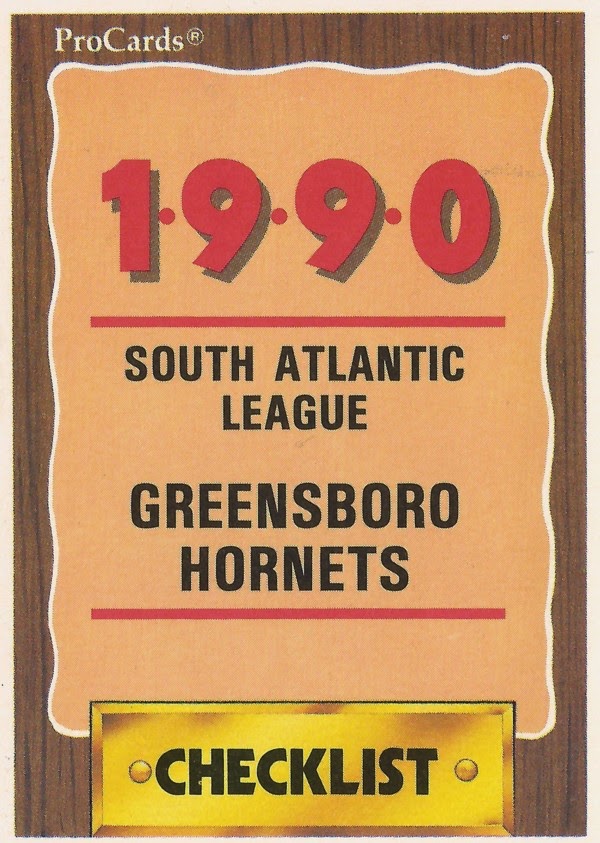 1 - Rich Arena, Was Ecstatic
Rich Arena was ecstatic after a college home run. He went on to be a coach in minors and in high school.
2 - Brian Butterfield, Huge Part
Brian Butterfield played a huge part in several careers. He did it on defense.
3 - Andy Fox, Basic Skill
Andy Fox used his hustle to help the Yankees to a 1996 win. He went on to play in nine major league seasons
4 - Tim Garland, Could Do
Tim Garland's job was to get on base, help his team win. Now it's coaching.
5 - Sean Gilliam, Best Season
Sean Gilliam had probably his best day in independent ball. His best day in the pros couldn't get him above high-A.
6 - Jim Haller, Double Play
Jim Haller finished out a AA game, got praise. He played five pro seasons.
7 - Lew Hill, Tie Game
Lew Hill helped Andy Pettitte get a AA win. He played nine seasons, never made the bigs.
8 - Sterling Hitchcock, Great Way
Sterling Hitchcock got his first major league win in a pennant race, most memorable in playoffs.
9 - Jeff Hoffman, Lot of Class
Jeff Hoffman earned his way to AA. He never had a chance to make the bigs. He passed away in 1992
10 - Mark Hutton, Just Amazed
Mark Hutton became first the Australian to start a major league game.
11 - John Jarvis, Good Start
John Jarvis helped his high-A team to a good start in a 1991 game. He played just three seasons.
12 - Ramon Jimenez, Late Show
Ramon Jimenez won Batter of the Week honors in the Carolina League in 1992. He never made AA.
13 - Brian Johnson, Daily Battle
Brian Johnson took a chance in 1996 and ran with it.
14 - Dan Johnston, Well Enough
Dan Johnston pitched well enough to get a win in high-A in 1991 game. He played five seasons.
15 - Dave Jorn, Baseball Knowledge
Dave Jorn played and coached in college and in the minors. He's now a coach at Arkansas.
16 - Ken Jurabe, Came Back
Ken Jurabe played five pro seasons, two after a long layoff.
17 - Todd Malone, Pitching Award
Todd Malone won Yankees minors Pitcher of Year in 1988. He never made AA.
18 - Bobby Munoz, Starter Stuff
Bobby Munoz had starter stuff, closer stuff, too.
19 - Cesar Perez, Ninth Inning
Carlos Perez helped close out a win for Greensboro in 1991. He played in seven seasons.
20 - Rafael Quirico, Something Big
Rafael Quirico threw a minors no-hitter, played single game in bigs.
21 - Mike Rhodes, Three Runs
Mike Rhodes knocked in three runs in a GCL game. He played just three seasons as a pro.
22 - Ricky Rhodes, Coaching Decisions
Ricky Rhodes chose to stay. But his future wasn't in baseball. It was in women's basketball.
23 - Jason Robertson, Two Ways
Jason Robertson dealt with adversity by working harder. He never made the bigs.
24 - Scott Romano, Hit 'em
Scott Romano hit 'em in 11 pro seasons, but he never made the majors.
25 - Daniel Sanchez, Two Hits
Daniel Sanchez tried to help his high-A team, but it wasn't enough. He got into three pro seasons.
26 - Kelly Sharitt, Prized Possession
Went from pro trainer to college equipment manager
27 - Steve Tucker, Got Outs
Steve Tucker got outs at single-A but he only played two seasons as a pro.
28 - Brian Turner, His Best
Brian Turner played seven pro seasons. He never became a prospect, never made the bigs.
29 - Ted Uhlaender, Hard Worker
Ted Uhlaender was a hard worker. His daughter was, too.
30 - Aaron Van Scoyoc, That Knowledge
Aaron Van Scoyoc has passed his baseball knowledge on to his son.
31 - Larry Walker, Solo Homer
Unlike the other player with the same name, this Larry Walker briefly made AA, but not the bigs.
Posted by Steve78 at 9:00 PM