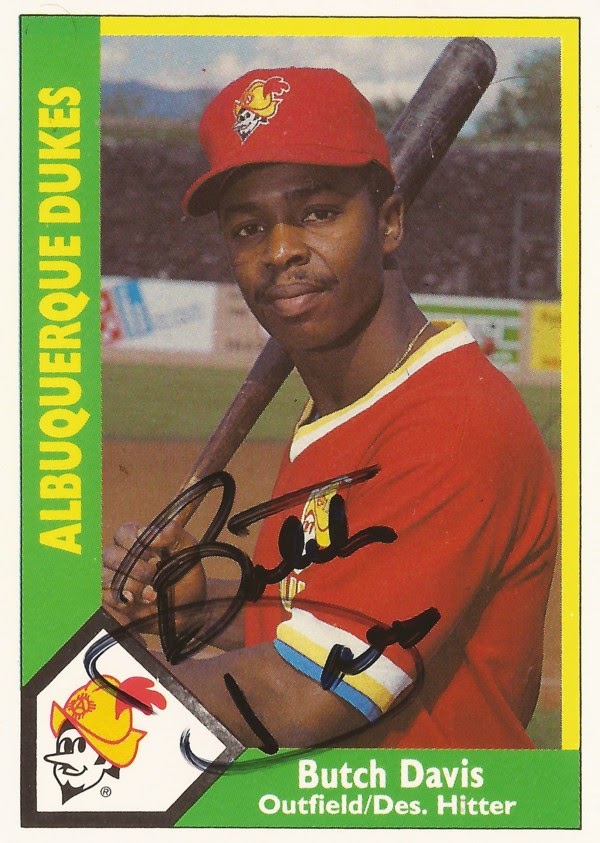 That it was Davis' first major league hit no one had to point out. The opposing second baseman did have to point something else out to Davis: The home crowd.

"He told me 'Hey, they're cheering for you,'" Davis recalled recently to The Greatest 21 Days of that moment. "'Take your hat off and just acknowledge the crowd.'

"I took my hat off," Davis continued, "and it was great."

Davis went on from that moment to a major league career that spanned eight seasons, Davis getting into 166 games. He's since gone on to a long career as a coach in the Orioles system,

Davis spoke with The Greatest 21 Days recently at Binghamton's NYSEG Stadium, Davis' Bowie BaySox visiting the AA Mets.
Speaking inside the visitor's dugout, Davis recounted his career from growing up in North Carolina to turning pro and making his way to the majors.

He then covered his repeated efforts to get back to the bigs. At one point he went eight seasons, getting into a total of 26 major league games. He kept getting back, he recalled, by keeping his positive attitude and working hard.

That hard work finally paid off with a season in which he saw 62 games for the Rangers, and hit the first inside-the-park home run at Baltimore's Camden Yards. It also paid off with a coaching career that has now spanned two decades, spending 2014 as hitting coach at AA Bowie.

It also ended up getting him immortalized as an extra in Bull Durham.

Davis grew up in North Carolina, graduating from Williamston High School in Williamston. He remembered just going outside and playing the game.

He recalled playing basketball and football, as well. Going into high school, he tried out for both the baseball and basketball teams. He didn't make either. The coach then invited him to try again his sophomore year and he made both.

Davis moved on to play baseball at East Carolina University. He recalled not really thinking about the possibility of playing professionally. He was just enjoying playing the game.
"A lot of times that's the best thing you can do, just enjoy the game," Davis said, "and not put any pressure on yourself."

It was around his junior season at East Carolina that his coach told him a scout was there to see him play. Davis was surprised.

He didn't get taken that year, but he did the next. The Royals took him in the 12th round of the 1980 draft. But he didn't expect to be drafted. Scouts were there to see him. But they were also there to see maybe four or five other guys, he recalled.

Davis was assigned to one of the Royals' Gulf Coast League teams. He recalled the transition to pro ball made easier because a friend got drafted to the Royals with him.

Davis' trip through the minors ended up being a steady one. He played his second year at single-A Fort Myers, his third at AA Jacksonville. He started 1983 back at Jacksonville, then moved to AAA Omaha.

That August, he got his call to Kansas City. "That was like a dream come true," Davis said of his call up.

It also came as a surprise, he recalled. He had no idea.

The call came in the morning, as Davis was at his apartment. Omaha manager Joe Sparks got through.
Sparks asked what Davis was doing. Davis recalled responding he was just relaxing and taking it easy.

Sparks then got to the point: Davis needed to go to Kansas City.

Davis recalled not being sure he heard Sparks right.

"He said, 'You've got to be there today, so you need to come in, get your stuff and get packed and get to Kansas City,'" Davis recalled.

"I really didn't have time to even think about it," Davis said, "because it happened so quickly. You're in the minor leagues one minute and the next minute you're in the major leagues."

Once he got there, Davis said, he found out everything he'd heard about the majors was how it really was.

"You always hear all those stories about how great the major leagues is," Davis said, "first class this, and it's true.

Davis got there. He then had to work to keep getting back. (Go to Part 2)