Features on each member of the 1990 Sumter Braves, single-A affiliate of the Atlanta Braves. Players featured are as included in that year's team set. 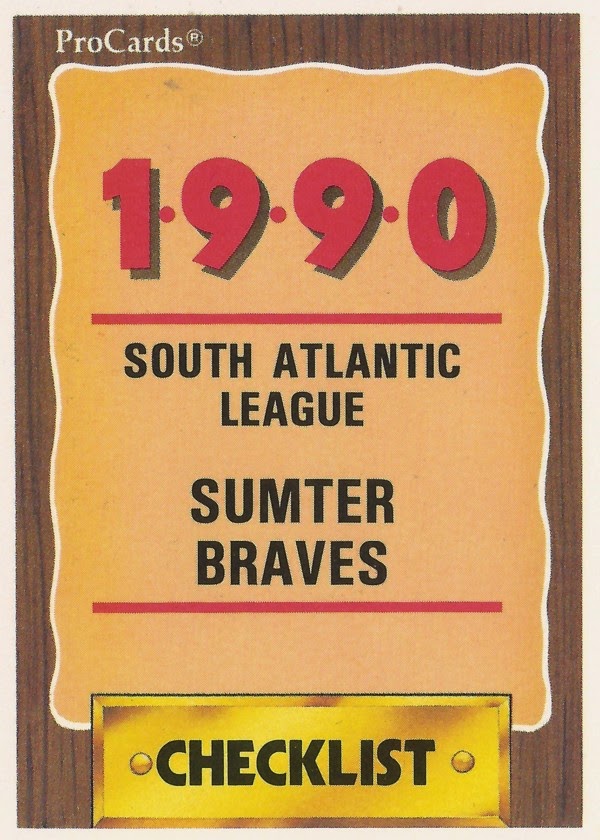 1 - Tab Brown, Brief Career
Tab Brown was a second-rounder for the Braves. He only managed time in three pro seasons.
2 - Vinny Castilla, Fan Favorite
Vinny Castilla's minors manager thought he had a chance, if he could hit for power.
3 - Mike Gabriele, Some Rest
Mike Gabriele went from college to the pros. He played just two seasons.
4 - Steve Glass, Pro Ball
Steve Glass turned pro and it was one of the happiest and proudest moments of his life.
5 - Kevin Haeberle, Caught Up
Kevin Haeberle couldn't pitch himself out of every jam. He played just two seasons.
6 - Lee Heath, Defensive Prospect
Lee Heath went from being a defensive prospect in football to one in baseball.
7 - Roger Hailey, Best Chance
Roger Hailey pitched well at single-A Sumter. He never made AA.
8 - Tyler Houston, Learning To Hit
Tyler Houston learned to hit. He then made the majors.
9 - Earl Jewett, Big Key
Earl Jewett threw a no-hitter in his second pro season. He played just three pro seasons.
10 - Willy Johnson, All-Star
Willy Johnson served as an all-star trainer for 13 minor league seasons.
11 - Pat Kelly Gamer Attitude
Pat Kelly had a gamer attitude at single-A. He made AAA, but not the bigs.
12 - Ryan Klesko, Delivering for Mom
Ryan Klesko wanted a World Series home run for his mom. He played in 16 major league seasons.
13 - John Kupsey, Nice Kid
John Kupsey was a good player in high school. He made the pros for six seasons, but not the bigs.
14 - Fred Lopez, Backup Catcher
Fred Lopez was praised as a backup catcher at single-A. He played just three seasons as a pro.
15 - Gene Martin, Big Hits
Gene Martin followed his father to the pros. He later followed him to coaching.
16 - Eddie Mathews, Next Season
Eddie Mathews started his pro career as minors assistant general manager.

17 - Miguel Mendez, At Third
Miguel Mendez played in two pro seasons, just three games at Sumter.
18 - Tom Newman, Mental Lock
Tom Newman played two seasons, missed double play at single-A.
19 - Melvin Nieves, Stuck With It
Melvin Nieves played in seven seasons in the bigs and two in Japan.
20 - Jose Olmeda, Those Guys
Jose Olmeda moved up to single-A in mid-1990. He later made AAA, but not the bigs.
21 - Eddie Perez, Clutch Situations
Eddie Perez had the Turner Field fans chanting his name in 1999.
22 - Ralph Rowe, Own Eyes
Ralph Rowe judged and gave advice to his players using his own eyes.
23 - Bill Schafer, Four Wins
Bill Schafer picked up four wins for Sumter in 1990. They were the final wins of brief pro career.
24 - Dan Sims, Early Run
Dan Sims used his speed for an early rookie ball run. He played just two seasons.
25 - Shaun Sottile, Impressive Start
Shaun Sottile was impressive for his collegiate league team. He played three seasons as a pro.
26 - Earl Steinmetz, Independent Attention
Earl Steinmetz sometimes got the most attention in independent ball. It wasn't always good.
27 - Don Strange, Job Done
Don Strange got the job done at Sumter in 1990. He played eight seasons, but he never made the bigs.
28 - Tony Tarasco, Felt Like
Tony Tarasco felt like a 12 year old in his major league debut. He later was shown up by one.
29 - Ron Thomas, Bore Down
Ron Thomas did well in a May 1990 game at Sumter. He played three seasons as a pro.
30 - Matt West, Had Ability
Matt West started his pro career on a dare.
31 - Mark Wohlers, Cranked It
Mark Wohlers became a reliever in the minors. He then cranked it up a notch.
32 - Ned Yost, Good Proof
Ned Yost knew a minor league pennant was icing on the cake. He later got a major league pennant with the Royals.
Posted by Steve78 at 1:00 PM