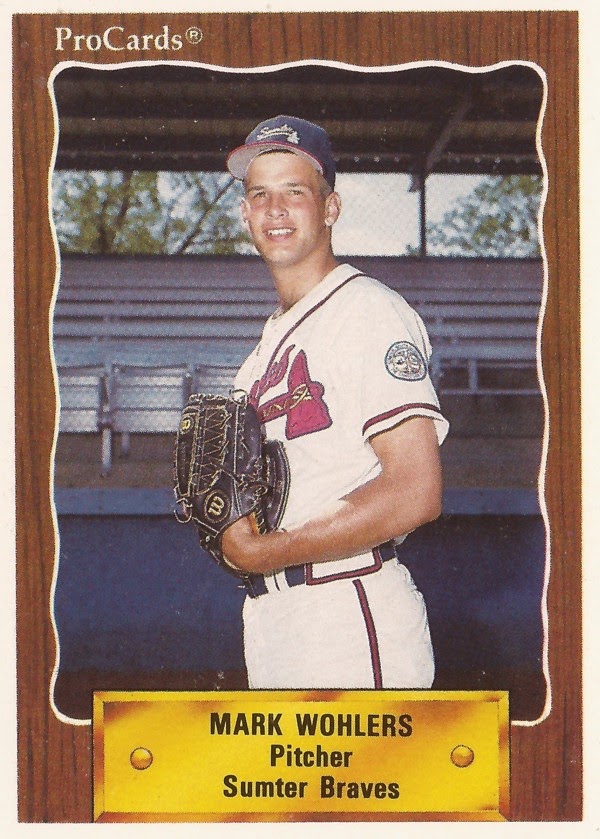 Mark Wohlers began his professional career as a starter, but he couldn't get outs, The Newport News Daily Press wrote.

Then the Braves turned Wohlers into a reliever and he took off.

"Nobody had any idea that fastball was there," Richmond pitching coach Bruce Dal Canton told The Daily Press. "It was a mind-set he developed in relief. He knew he was only going to go an inning or two, and so he just cranked it up a notch."

Wohlers went on to use that mind set in 12 major league seasons. Along the way, he made an all-star game, participated in a no-hitter and he picked up one World Series ring. He later threw one World Series pitch he wished he hadn't.

Wohlers' career began in 1988, taken by the Braves in the eighth round of the draft out of Holyoke High School in Massachusetts.

Wohlers started in the rookie Appalachian League. He made single-A Sumter in 1989 and returned there in 1990, where he changed his focus to relieving. He also saw AA Greenville.

Wohlers the reliever then quickly made the majors. He also quickly took part in history. He debuted in August 1991. In his ninth outing, Wohlers took part in history, throwing two hitless innings in a combined no-hitter - the first-ever in the National League.

"I'm glad to be a part of this," Wohlers told The Associated Press afterward. "It's a big win for the team. I'm never going to forget this."

That October, he got his first taste of post-season action, getting into three games apiece in the LCS and World Series. In 3.1 total innings, he gave up five hits but no earned runs.

Wohlers then became a regular for the Braves. In 1995, Wohlers became the team's closer. He saved 25 games and helped the club to the world championship.

That July, Wohlers was about to take the closer title with seven saves in a month. He picked up his second relief win July 5, helping to give consistency to the Atlanta pen.

"You just continue to concentrate and stay focused on the mound," Wohlers told The Gadsden Times after the win. "The way you come out of slumps dictates what kind of ball player you're going to be."

Wohlers and the Braves returned to the World Series in 1996, Wohlers saving a career high 39 saves in the regular season. He also made the All-Star game.

In Game 4 of the World Series, Wohlers came in to protect a three-run, eighth-inning lead and he gave up a three-run home run to Jim Leyritz.

"You don't question the pitch," Braves manager Bobby Cox told reporters afterward. "You question the location. It slipped on him, and it backed up. He gets it where he wants to, he's got him nailed."

Wohlers saved another 33 games in 1997. In 1998, though, he saved just eight as problems with location led to a high ERA and a bad year.

Wohlers played four more seasons in the majors with the Braves, Reds, Yankees and Indians. He got into more than 60 games in each of his final two seasons, with ERAs in the fours, but he only got seven more saves.