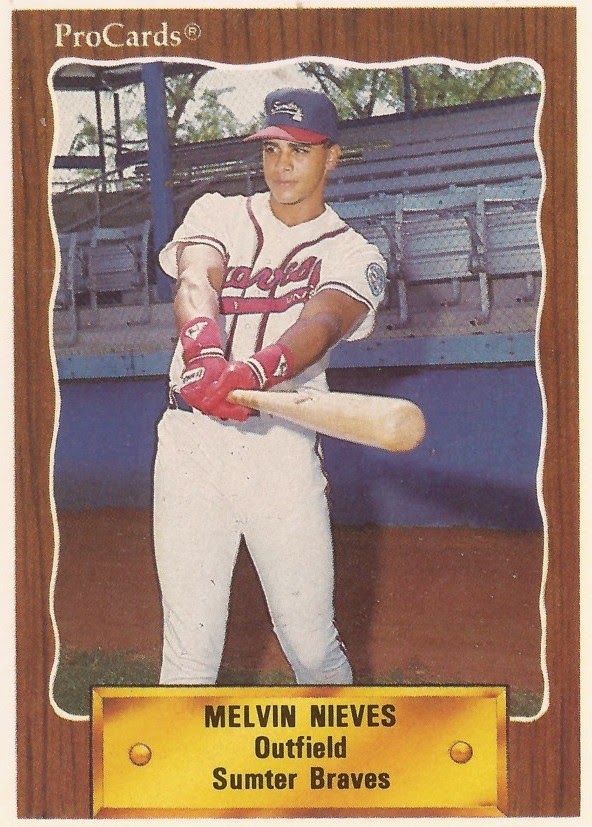 Melvin Nieves didn't have much luck in one April 1997 game batting right-handed, striking out twice with runners in scoring position, The Associated Press wrote.

The next night, though, the switch-hitting Nieves came back left-handed and hit a crucial double to help his Tigers to a win, The AP wrote.

"It was big for Melvin," Tigers manager Buddy Bell told The AP afterward. "Anytime you get a hit like that in that situation, especially after what happened last night you can give up, but Melvin stuck with it."

Nieves was in his sixth season in the majors that year - his third with significant time in the majors. By the time he was done, he had time in seven seasons and 458 major league games.

He also played two seasons in Japan and didn't stop playing somewhere until 2008.

Nieves' career began in 1988, signed by the Braves as a free agent out of his native Puerto Rico.

Nieves started in the rookie Gulf Coast League. He made single-A Sumter in 1990, then AA Greenville in 1992. He also made Atlanta in 1992.

Nieves debuted with Atlanta that September. He got into 12 games and got four hits. He then returned to the majors in 1993 and 1994 with the Padres, getting into 19 and 10 games respectively.

In another April 1997 game, Nieves almost hit another home run, ending up with a bases-clearing double.

"I didn't get all of that one," Nieves told The AP afterward of that double. "I think (the center fielder) may have turned the wrong way. It came at a good time. I was hoping it was going to be a grand slam but I'll take it."

Nieves moved to the Reds in 1998. He got into 83 games and hit .252. Early that year, Nieves went through personal tragedy, losing his infant son to a heart defect.