Features on each member of the 1990 Palm Springs Angels, single-A affiliate of the California Angels. 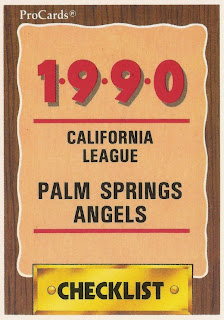 1 - Clemente Acosta, Fourth Save
Clemente Acosta finished off a single-A save in 1988. He never made the bigs.
2 - Terry Carr, Line Drives
Terry Carr was called a Gary Pettis-type. He never made the bigs.
3 - Marvin Cobb, Two Hitless
Marvin Cobb picked up a short-season win. He made AA, but not the bigs.
4 - Frank Dominguez, Guessed Right
Frank Dominguez guessed right, hit a high school home run.
5 - Steve Dunn, One Run
Steve Dunn gave up one run in a college outing. He played three pro seasons.
6 - Dave Esquer, Exceptional Leadership
David Esquer kept his Cal team together and they made the College World Series
7 - John Fritz, Good Impression
John Fritz tried to leave them with a good impression.
8 - Jeff Kelso, Hit It
Jeff Kelso made a fastball the game-winner at short-season. He never made AA.
9 - Jeff Kipila, More Comfortable
Jeff Kipila felt more comfortable at the plate. He made AAA, but not the bigs.
10 - Brett Merriman, That Control
Brett Merriman used his control for a high school no-hitter. He made the bigs in two seasons.
11 - David Martinez, Second Game
David Martinez played eight seasons as a pro. He never made the bigs.
12 - Jeff Oberdank, His Assets, 5/5/15
13 - Nate Oliver, Little Things
Nate Oliver knew that little things counted in baseball
14 - Larry Pardo, Fiercely Proud
Larry Pardo has played, coached and scouted in pro ball.
15 - Richard Parker, Big Hit
Richard Parker got a big hit early. He later tried pitching. He never made AA.
16 - Dave Partrick, Bunt Sign
Dave Partrick started in the outfield. He then moved to pitching. He never made AA.
17 - Beban Perez, Three Hits
Beban Perez helped his independent team to a big win in 1995.
18 - J.R. Phillips, He Did
J.R. Phillips did what he did, made seven ML seasons.
19 - Kernan Ronan, Great Expertise
Kernan Ronan had great expertise as a minor league coach.
20 - Tim Salmon, Dreaming About
Tim Salmon knew the situation and he knew it was big.
21 - Mike Search, Positive Energy
Mike Search brought positive energy to his high school team. He never made AA.
22 - Dave Sturdivant, Three Runners
Catcher Dave Sturdivant once threw out three runners in a game. He never made AAA.
23 - Terry Taylor, Had Potential
Terry Taylor had big hopes out of college. He never made it above AA.
24 - Brandy Vann, Just Pitch
Brandy Vann started over. He hoped he'd make the bigs. He never made it.
25 - Don Vidmar, To Work
Don Vidmar threw a high-A no-hitter. He played five seasons, not in the bigs.
26 - Tim Wallace, Only Thing
Tim Wallace's pro career lasted longer than a decade. He never made the bigs.
27 - Wally Warrecker, Complete Game
Wally Warrecker threw a complete game in college. He played two seasons as a pro.
Posted by Steve78 at 11:17 PM